Almost a year ago, the Canadian Broadcasting Corporation (CBC) announced the addition of an opinion section to its web site. “I’m happy to share with you that one regular contributor to the new Opinion section will be the CBC’s Neil Macdonald, who will now cease reporting, and focus his efforts exclusively as a columnist. Neil’s analysis pieces already generate passionate response, and this move from news to opinion will take advantage of his tremendous strengths,” stated Jennifer McGuire, CBC General Manager and Editor in Chief.
McGuire didn’t identify what she considered Macdonald’s strengths, but his experience includes a stint reporting from Israel in the late 1990s. His tenure in Jerusalem was marred by a series of uncorrected factual errors, such as the claim that a bypass road near the Palestinian village of Kfar a-Dik was built for the “convenience” of nearby settlers (in fact, it was built to save lives after terrorists fired on an Israeli woman, Yael Meivar, mortally wounded her in the head and neck as she travelled by car in the area); that “thousands” of olive trees belonging to Palestinians were uprooted to build that road (according to Peter Lerner, then the spokesperson for the Civil Administration, the figure was 354 — dozens of those trees were replanted elsewhere for the Palestinian farmers, and others were offered compensation); and that “Israelis continue to consume their water … as if they live in Europe” (according to World Resources Institute data from that time period, Israelis consumed 292 cubic meters of water per capita, less than half the European average of 660).
As for the claim that the bypass road near the Jewish community of Alei Zahav and the Palestinian village of Kfar a-Dik was built for “convenience” of settlers, as opposed to their protection, CBC identified Macdonald’s source as Moshe Shimoni, the “spokesperson” of Alei Zahav. But when CAMERA contacted residents of the small community, including the secretary, no one had ever heard of Shimoni.
This is ancient history, chronicled at the time in places like Canadian Jewish News, The Jerusalem Post, and CAMERA’s aging filing cabinets (but not on our web site, as Macdonald’s older errors predated the era when events only happened if they were recorded online). In his opinion piece yesterday slurring Israel as an apartheid state, Macdonald demonstrates that his strained relationship with the facts has not improved (“Forget the ‘slippery slope’ — Israel already is an apartheid state“).
Like Israel prize winner Shulamit Aloni (whom he cites approvingly), Macdonald argues that purportedly Jewish-only roads are an indication of Israeli apartheid. He writes:

The roughly three quarters of a million Jewish settlers in the West Bank and East Jerusalem have complete freedom of movement and their own set of roads, effectively forbidden to the disenfranchised Palestinian underclass.

First, Jewish settlers do not have “their own set of roads.” There are a limited number of West Bank roads that are prohibited to Palestinian vehicles, but they are open to all Israelis – settlers and non-settlers, Jews and Arabs alike. The Associated Press, The Washington Post, The Boston Globe and CNN are among the media outlets which have corrected this identical error in the past.
Second, contrary to Macdonald’s assertion, Jewish settlers, and most Israelis, do not have complete freedom of movement in the West Bank. Israelis are prohibited from entering Area A of the West Bank, that is some 40 percent of the West Bank which is under control of the Palestinian Authority. Large red signs are posted at the entrances to these territories warning Israelis that it is forbidden for them to enter. In practice, Israeli Arabs do frequently enter Area A, so the restriction is only consistently enforced for Israeli Jews. 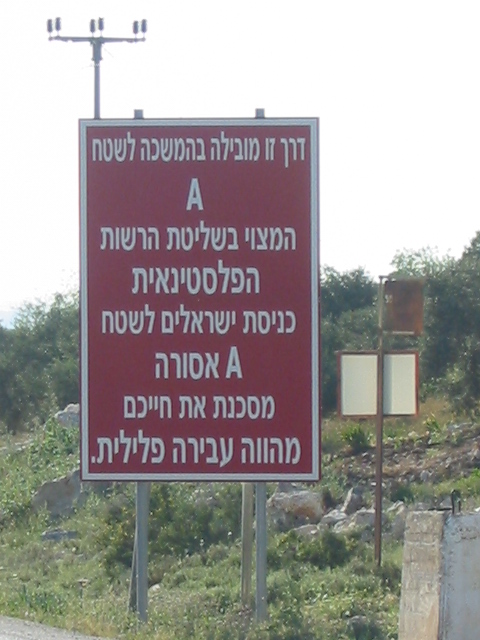 Translation: This road leads to Area “A” under the Palestinian Authority. The entrance for Israeli citizens is forbidden, dangerous to your lives, and is against Israeli law (Photo: Wikipedia)
In addition, like President Jimmy Carter, author of the error-ridden 2006 book Palestine: Peace Not Apartheid, which Macdonald also cites approvingly, Macdonald dismisses the fact that well over 90 percent of Palestinian live under their own government, the Palestinian Authority. Only by ignoring that critical information could Macdonald claim that “settlers are entitled to carry arms and use them in self-defense; Palestinians are not.” In fact, there is a proliferation of guns, both legal and illegal, in the Palestinian-controlled West Bank. A Palestinian living in the Palestinian West Bank who wants a gun can get a gun.
In addition, Macdonald falsifies regarding Palestinian property rights under Israeli law, stating “Settlers have property rights. Palestinians have property claims.” Palestinian Arabs, despite not being citizens of Israel, may – and do – fight for their land rights including in Israel’s High Court. They also win.
He likewise fools readers by arguing that only Palestinian militants, and not Israeli Jews, are subject to administrative detention. “Settlers suspected of crimes are entitled to full rights in Israeli courts; Palestinians endure … indefinite imprisonment without charge (‘administrative detention’),” Macdonald claims. Israeli citizens, Jews, and settlers are also subject to the practice.
Moreover, using extremely distorted terminology for Israeli communities across the Green Line (some of them on the sites of Israeli villages that existed prior to 1948, when the Jewish inhabitants were exp
elled), Macdonald avers that “since the election of Donald Trump, colonization has surged with an invigorated enthusiasm.” (The hyperlinked article is a CNN piece which reports on Israeli government approval for one single new settlement, the first in some 20 years.)
Meanwhile, in a more sober and fact-based characterization of the settlement growth situation since President Trump took office, Haaretz reported this month (“Netanyahu Pledged 3,800 New Settlement Homes, but Only 600 Will Be Actually Built“):

Under pressure from the settler lobby, the Prime Minister’s Office has over the past few days invested a great deal in creating the impression that a new wave of settlement construction is in the offing. But a close examination of the list of construction plans expected to be approved next week shows that despite declarations that plans for some 3,800 new homes are being advanced, the government is expected to approve only around 600 new units. …

On Tuesday, when the High Planning Council’s agenda was published, it emerged that there is a substantial gap between the declarations and reality. The 3,800 units presented to the public is an inflated, recycled number, with the government expected to give immediate building permits to only 600 units. …

So what happened to the other 3,200 promised homes? All will be advanced a stage in the lengthy bureaucratic process, but building will not begin soon and these plans could easily be halted at any time by either Netanyahu or Lieberman.

Israel is moving ahead with plans for a significant expansion of its settlements in the occupied West Bank, including apartments in the volatile city of Hebron and the first approval of a new settlement in 20 years.

But while the latest plans call for the eventual construction of thousands of new homes on the West Bank, when Israeli officials meet this week to review them, only several hundred housing units appear likely to be granted final approval.

Prime Minister Benjamin Netanyahu is once again maneuvering on familiar ground, trying to balance the demands of his pro-settlement coalition partners with the opposition from the international community.

In restricting the number of final approvals now, however, his government may also be taking into account some other Israeli priorities. Among them are the campaign against Iran and the joint interests he has been pushing with Arab countries like Saudi Arabia, with which Israel has no formal diplomatic relations.

CAMERA has called on the CBC to correct Macdonald’s errors and distortions.

Lots of errors 2 be corrected. 1) Settlers do NOT have complete freedom of movement in WB. Israelis may NOT enter Area A @CBCOmbudsman pic.twitter.com/VGlUajbNLs

Warnings 4 Israelis 2 stay out of Area A (approx 40% of WB) are all over West Bank. So much for “complete freedom of movement” @CAMERAorg pic.twitter.com/GFA8PYddRK

2)Settlers don’t have “own” roads. A few WB roads are closed to Palestinian traffic, open to all Israelis (non-settlers, Jews, Arabs)