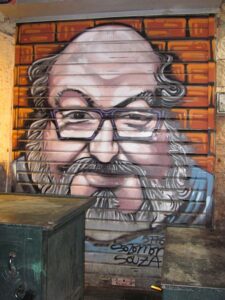 A mural of Jonathan Pollard in Mahane Yehuda market in Jerusalem, 2017 (Photo by Yoninah/Wikimedia)

CBS has failed to correct the straightforward factual error in a Nov. 21 article and headline that former spy Jonathan Pollard is free to “return to Israel.” The headline errs: “Spy sentenced to life in U.S. prison can now return to Israel after completing parole.” Likewise, the first sentence states: “A former spy who was once convicted to life with the possibility of parole under the Espionage Act has completed his parole and can return to Israel, his lawyers said Saturday.”

Pollard, an American who received Israeli citizenship in the 1990s while serving his jail sentence, had not lived in Israel, and thus he would not be “returning” there, but moving there. For that reason, contrary to the article, his lawyers did not say he “can return to Israel.” Rather, they state:

Specifically, Mr. Pollard is no longer subject to a curfew, is no longer prohibited from working for a company that does not have U.S. government monitoring software on its computer systems, is no longer required to wear a wrist monitor that tracks his whereabouts, and is free to travel anywhere, including Israel, for temporary or permanent residence, as he wishes. . . .
We look forward to seeing our client in Israel. (Emphases added.) 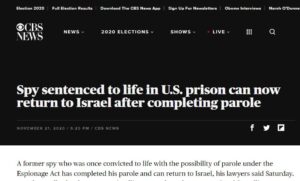 Though CAMERA informed CBS about the clear cut error, the network has yet to correct the error.