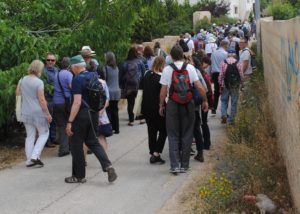 Bethlehem Bible College brought approximately 200 Christians to meet with members of the Tamimi family at Nabi Saleh on May 29, 2018. The stated goal of the field trip, which was part of the “Christ at the Checkpoint” Conference that took place earlier this year, was to educate Christians about “nonviolent resistance” in the West Bank. Members of the Tamimi family have promoted violence against Israel. (Photo: Dexter Van Zile)

Christian peacemakers are supposed to promote nonviolence, but when they come into the presence of Palestinians who say hateful things against Israel and promote acts of violence against its citizens, some of these folks get really excited in an unwholesome sort of way. It’s creepy.

They are not as bad as the teenagers who screamed in adoration at the Beatles and the Rolling Stones during the British invasion in the 1960s, but they’re bad enough. They’re more like rock critic Jon Landau, who after attending a Springsteen concert in 1974 wrote, “I saw rock and roll future and its name is Bruce Springsteen.”

Longtime Sabeel activist Don Wagner had his Springsteen moment after meeting Yasser Arafat at the White House in 1992. In a 1993 book he co-wrote with Dan O’Neill, a co-founder of the Christian charity Mercy Corps, Wagner wrote, “Yasser Arafat is, without a doubt, the most intriguing personality in the Middle East,” and that “Both Dan and I have met Arafat and consider him a charismatic leader who is solely devoted to establishing a state for the Palestinians.” “Intriguing” and “charismatic”? That’s the type of stuff you’d see written in the pages of Tiger Beat back in the day. Like I said, creepy.

Similar fawning was displayed at the recent Christ at the Checkpoint Conference organized earlier this year by Bethlehem Bible College. On May 29, 2018, the second day of the conference, organizers affiliated brought three busloads of Christian peace activists from Europe and North America to the home of Bassem Tamimi in Nabi Saleh, an Arab village near Ramallah. The goal was to expose Christians about “nonviolent resistance in the village.”

To read the rest of this article, which was published in The Jerusalem Post on July 2, 2018, click here.