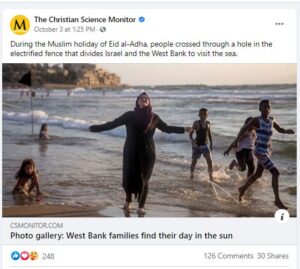 CAMERA’s Israel office yesterday prompted correction of a Christian Science Monitor Facebook post which falsely described Israel’s West Bank security barrier as “electrified.” The Oct. 3 Facebook post had erred: “During the Muslim holiday of Eid al-Adha, people crossed through a hole in the electrified fence that divides Israel and the West Bank to visit the sea.”

The photo gallery to which the post links (“West Bank families find their day in the sun“) does not make the erroneous assertion that the security barrier is electrified.
While much of the barrier is electronic, meaning that it has sensors and cameras which alert Israel’s army of any contact or breach, it is not electrified, and will not electrify anyone who touches it.
In response to CAMERA’s communication requesting correction, editors promptly amended the post, which now accurately refers to the “electronic” fence.
Donate Now