… the extermination of Jews in Poland was not at all a secret: it happened in plain view of everyone, it was an absolutely public affair. In the very heart of their cities, the Poles, at first, were present at the installation of the ghettos, they lived with the ghettos and it was, for them, the most natural and least scandalous thing in the world. It went without saying. Later—and I collected innumerable accounts on this subject—they were the impassive witnesses to the actions that were perpetrated before their eyes….”

Cicadas (Magicicada septendecim) are insects with a very particular life cycle, which in some ways can be compared to the reemergence of antisemitism in human history. It can serve as a useful analogy or metaphor.

Every 17 years, cicadas emerge massively and simultaneously in the northeastern United States and Canada. The goal is to “create” an infrequent superabundance of food that far exceeds the needs of their predators. That is, these locust-like insects overwhelm the predator’s appetite. They sacrifice some of their fellow creatures so that many others can survive, mate, and continue the species over time.

This strategy, explained biologist Stephen Jay Gould, is known by the name of “predator satiety.” For it to be effective, the species’ sudden emergence must occur at the same time and only for a very short period of time.

Plus, their sudden emergence must happen after long periods of inactivity.

The brilliant idea behind “predator satiety” is that the predator, which has life cycles shorter than that of the cicada, cannot precisely predict or remember the appearance of the insects and thereby adjust its own life cycle to that of this particular food source.

So, it could be said that cicadas’ method of survival seeks the “oblivion” of the appearance of its species.

Homo sapiens use a similar method. But not as a survival strategy; on the contrary, humans use it as an aggression strategy. The sudden emergence of group hostility allows individuals within the group to elude personal responsibility. Mass aggression lets individuals indulge their atavistic urges to harass and intimidate. And so, for a brief and unpredictable time, this overwhelming burst of group hostility makes it possible for the individual to get away with unthinkable crimes.

And getting away with unthinkable crimes is the story of antisemitism. As in the case of “predator satiety,” antisemitism involves concealment or quasi-lethargic permanence for periods of time that are variable.

Thus, from time to time, when memories of antisemitism have expired, a significant number of hidden antisemites, almost as if there was a global agreement, suddenly turn to the open practice of their ancient hatred as if it were a sudden burst of cicada.

Contempt is turned into a kind of commandment; the most ominous imbecility, into a virtue. Meanwhile, the great majority of humanity simply watches how this swarm of hatred reproduces itself. Actually, more than one of these “observers” is happy to offer his assistance in overwhelming the Jew, who is invariably described as a kind of predator. 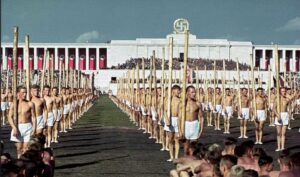 In this way, antisemitism grows, flooding the environment, overwhelming, cloying the “predator” – that is, reason, empathy, solidarity – to the point of indifference and abulia. This ensures antisemitism’s perpetuation and its momentary “impunity” to act. When the eventual shame imposes itself, the hate will bury its notorious body again among the crowd, where it will remain until the next outbreak.

But unlike the predators of cicadas, Jews are longtime practitioners of that which we call history. That is, we record, among other facts, the manifestations of antisemitism. But, even so, each time it begins to show its badly disguised face under an alleged novelty, the general reaction is that of surprise and downplaying (even utter disregard): it is said to be merely opinions, mistakes, unawareness. Then, when the emergence has become too advanced, it overcomes the astonishment and the mild, skinny attempt of justification of having been unable to identify what was otherwise evident.

This article originally appeared in Spanish in La Opinión.