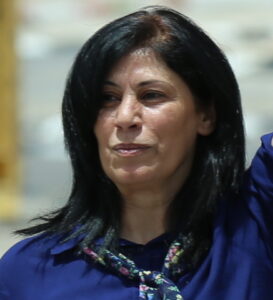 In recent articles, Haaretz has alleged that the reasons for the 2017 arrest of Khalida Jarrar, a former Palestinian lawmaker who was arrested again last week, are “still classified” despite the fact that Haaretz itself reported those very reasons at the time of the arrest. Most recently, a Nov. 4 page 2 print edition story by Jack Khoury entitled “Israel arrests PA J’lem Affairs minister for third time,” erred:

In February, Jarrar was released after 20 months of administrative detention without trial. The reasons for her previous arrest are still classified. (Emphasis added.)

The identical error appeared in the Oct. 31 digital article entitled “Israel Arrests Ex-Palestinian Lawmaker, Only Eight Months After Her Release From Prison“.
In fact, the reasons for her previous 20 months of administrative detention, which lasted from July 2017 until February 2019, are not classified, and Haaretz itself has reported them.

Israeli security forces rearrested Palestinian lawmaker Khalida Jarrar on Saturday night, saying she had increased her activity in the Popular Front for the Liberation of Palestine since her release from jail last year. . . .
“Jarrar was arrested following her involvement in promoting terrorist activity through the PFLP, and without any connection to her being a member of the Palestinian Legislative Council,” the Israel Defense Forces Spokesman’s Office said in a statement on Sunday. . . .
The army alleges that shortly after her release from prison, Jarrar returned, “to an even greater extent,” to activities with the PFLP, directing the group’s operations and serving as a senior member of the organization in the West Bank, and in the Ramallah area in particular.