In response to communication from CAMERA, Reuters commendably corrected the article to make clear that promotion of BDS in Israel is a civil matter, not criminal. See below for a detailed update.

In an article yesterday about the ruling by Israel's High Court to uphold the government's decision not to renew the visa of Human Rights Watch's Omar Shakir on account of his ongoing anti-Israel BDS (boycott, divest, sanctions) activity, Reuters incorrectly reports that Israel has "criminalized" BDS.

Israel says [Shakir] supports the Boycott, Divestment and Sanctions (BDS) movement which it has criminalized.

It has lobbied Western powers to follow suit, and Shakir’s case was a test for its anti-boycott legislation.

Illustrative image of a BDS protest in Australia, 2010 (Photo by Mohamed Ouda/Wikimedia)

Israel's anti-BDS legislation treats calls for BDS as a civil, not criminal offense. Specifically, the 2011 "Law for Prevention of Damage to the State of Israel Through Boycott," as amended by the Supreme Court, allows businesses that have suffered economic harm as a result of such boycotts to sue for civil damages. There is no criminal component.
Incidentally, the English text of the 2011 bill is helpfully provided by Adalah, an Israel-based organization which itself has engaged in BDS activity. Speaking at Cambridge University in November 2017, Adalah Justice Project Director Nadia Ben-Youssef stated:

Adalah as a Palestinian organization based in Israel – because of this law has a prohibition on it with regard to the call for BDS. The law says that if you call for boycott- it had creating a new civil wrong, you can be sued in court if you call for a boycott of Israel. So Adalah has pivoted its argument about BDS, for the right to boycott… Adalah supports the right to boycott…we believe in the pillars of the BDS movement.

CAMERA has contacted Reuters to request a correction making clear that in Israel calls for BDS are a civil, not criminal, matter. CAMERA has also asked Reuters to either substantiate or correct the claim that Israel is lobbying foreign countries to criminalize BDS, a step that Israel itself has not taken.

This post was amended on Nov. 12 to correct the spelling of Nadia Ben-Youssef's name and to add more information about the close relationship between the Adalah Justice Project and Adalah - The Legal Center for Arab Minority Rights in Israel.

In response to communication from CAMERA, editors commendably amended the article, which now accurately reports:

Calling for boycotts of the state is not a crime in Israel, but those who do so can be subject to civil lawsuits.

In addition, editors posted the following correction at the very top of the article: 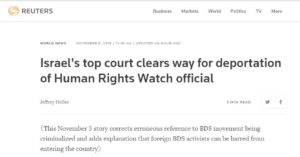