Following communication with CAMERA Arabic, CNN’s Arabic website corrected two reports that had charged Jewish visitors to the Temple Mount with “storming” the al-Aqsa Mosque. The reports, which covered the July 18 Tish’a B’Av events on Jerusalem’s Temple Mount, were corrected on July 28, CNN confirmed in its reply to CAMERA.

The first report, originally entitled “Settlers Intrude the al-Aqsa Mosque – Clashes between the Israeli Police and Palestinians,” was completely rewritten, mainly in accordance with the corresponding CNN report in English. Thus, CNN replaced references to “settlers” with ones to “religious Jews” and the verb “to intrude1” with “to enter.” The phrases “al-Aqsa Mosque” and “al-Aqsa Mosque plaza” were replaced with “the Jerusalem Sanctuary Complex, known to Jews as Temple Mount.”

The corrected now headline reads: “Religious Jews enter the Jerusalem Sanctuary Complex in the Destruction of the Temple Anniversary.”

Additionally, a photo implying that the events took place indoors (hence suggesting that a “mosque intrusion” did occur), was replaced with one reflecting the fact that all Jews stayed outside buildings throughout their entire visit. 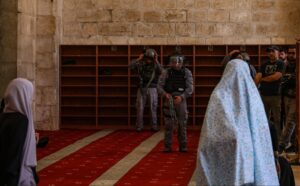 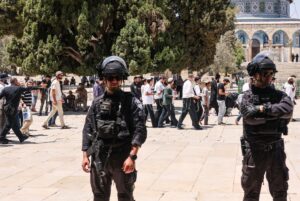 CNN’s current photo, with no caption.

CNN’s decision to use the existing English version as basis for a new Arabic one expanded the report considerably. Thus, while its previous version relied heavily on a single press release by PA news agency “Wafa,” it now also includes the official response by Israel’s PM Office, as well as other comments and background details, like the status quo arrangements of visits and prayers on site.

In the second report, covering the Jordanian official response to the events, CNN replaced the reporter’s original reference to Israelis “intruding” the site with a comment about Israelis

conducting prayer for the occasion of the ‘Destruction of the Temple Anniversary’ near the Dome of the Rock, contrary to agreements between Israel and Jordan concerning the status quo on site – known to Muslims as ‘the Noble Sanctuary’ and to Jews as ‘Temple Mount.’

Finally, an identical editorial remark was added at the bottom of both reports. It reads:

Editorial remark: text was amended to clarify that those who entered on Sunday to the Temple Mount area, known to Muslims as the Jerusalem Sanctuary Complex in Jerusalem, were religious Jews. This is according to agreements executed since Israel’s takeover of Jerusalem in 1967, pursuant to which anyone is allowed to visit the site, but only Muslims are allowed to prey there.

1. The Arabic word Iqtiham, regularly used by Arabic media outlets to describe any kind of Jewish or Israeli presence on Temple Mount, can be translated either as “intrusion”, “interloping”, “trespassing” or “storming” – depends on the number of Jewish/Israeli persons on site, whether or not they belong to security forces, how violent was the situation and so on. It is important to note, however, that in Arabic this is the same exact word.