For the several years that Christiane Amanpour has reported on CNN as chief international correspondent a particular narrative has dominated her broadcasts on Israel. CAMERA documented in 2010 that Amanpour has “an impulse to smear Israel … inject[ing] mention of Israel and its alleged myriad faults.” Indeed, a long list — going back to 1996 — of Amanpour’s misreporting about the Jewish state is found on CAMERA’s Amanpour page.

Amanpour’s pattern of misreporting was evidenced in the June 25, 2020  broadcast that provided two separate, albeit related, interviews. Typically, Amanpour provided no opportunity for the Israeli guest to rebut the Palestinian’s distortions and falsehoods. Tzipi Livni, a former Israeli foreign minister and a political opponent of Prime Minister Benjamin Netanyahu, was presented first. Following the end of that conversation, the CNN star presented Diana Buttu, a former legal adviser to Palestinian negotiators, who vilified Israel. 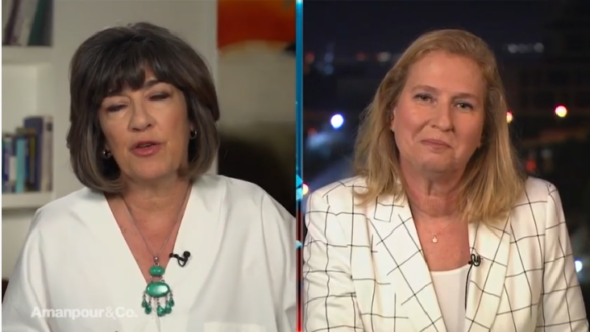 Prompted by Amanpour (“What you think of this plan to annex major parts of the West Bank?”), Livni explained why she opposes “annexation.” Livni thinks it would hinder the peace process and could lead to the undesirable one-state solution.

The use of the term “annexation” in reference to the West Bank, tends to convey the erroneous idea that Israel is intent on taking territory that does not belong to it.

As usual, no explanation or historical context was provided to Amanpour’s viewers. The term “annexation” refers to the application of Israeli law to the communities of over 500,000 Jews living in the West Bank, the entirety of which was part (“Judea and Samaria” as referred to both biblically and historically) of ancient Israel. These communities are on land which comprises only a tiny percentage of the total land mass of the West Bank. Israel captured the West Bank in 1967 from the Kingdom of Jordan, which had occupied the territory since its 1948-49 war with Israel. Prior to 1948, the West Bank, like Israel, was administered by the United Kingdom.

Amanpour, typically misinforming viewers, stated: “Occupied by Israel since the 1967-’68 war, the West Bank has been the sticking point in peace talks between Israel and the Palestinians for decades.” First, rather than extending into 1968 as Amanpour erroneously indicates, the 1967 war started on June 5, 1967 and ended on June 10, 1967, hence it’s known as the “Six-Day War.”

Moreover, while a military occupation exists in parts of the West Bank, West Bank Palestinians are self-governing with Israeli personnel mainly only entering Palestinian communities to deal with terrorists who injure or murder Israelis.

Amanpour’s “sticking point” assertion is misleading. The PA, the entity that rules over most Palestinians in the West Bank, has issued preconditions during—and before—negotiations, that they know to be non-starters. For example, the PA demands “a right of return” for millions of Arabs to Israel—a demand which, the PA very well knows, would end Israel’s existence as a Jewish state. The vast majority of these millions of Arabs have never lived in Israel.

The United Nations estimated that 711,000 Palestinians became refugees as a result of the 1948 war initiated by Arab states. As is shown by the CAMERA report, Palestinian Arab and Jewish Refugees, the overwhelming majority of Palestinian refugees were not expelled by Israelis during Israel’s War of Independence. During the same period a large number of Jewish refugees, estimated at 800,000, who had resided in Arab countries for many generations, were forced to flee their native lands. Thus, the so-called “right of return,” which in international law applies only to expelled refugees, applies to the Jewish refugees, as well.

Additionally, the PA’s policy of paying salaries to those who attack and murder Jews, known as “pay-to-slay,” and the Authority’s promotion of anti-Jewish violence, hinders any possibility for peace. This incitement to violence violates Article 26 (2) of the U.N. Universal Declaration of Human Rights, as well as Israeli-Palestinian agreements. 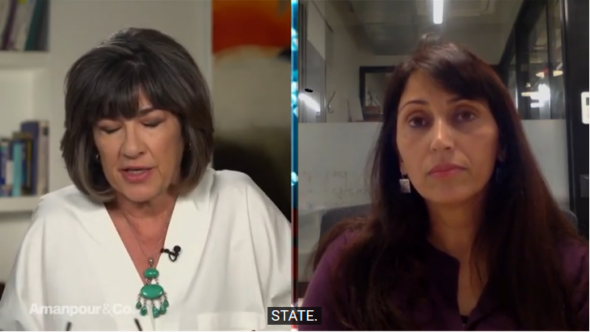 Amanpour and Diana Buttu, a lawyer and a former legal adviser to Palestinian negotiators

Aided by Amanpour, Buttu vilified Israel. Buttu’s condemnation of the Jewish state included numerous apartheid accusations. But Israel is in no way an apartheid state.

Alan Dershowitz (Professor of Law, Emeritus, at Harvard Law School) has succinctly described the reality of the situation: “Israel is in no way like apartheid South Africa, where a minority of whites ruled over a majority of blacks, who were denied the most fundamental human rights. In Israel, Arabs, Druze and Christians have equal rights and serve in high positions in government, business, the arts and academia…. Even the situation on the West Bank — where Palestinians have the right to vote for their leaders and criticize Israel, and where in cities such as Ramallah there is no Israeli military or police presence — the situation is no way comparable to apartheid South Africa.”

Likewise, author and native of South Africa, Benjamin Pogrund, explained the matter in a New York Times op-ed, “Why Israel Is Nothing Like Apartheid South Africa.” Pogrund wrote (March 2017):

Here’s why the apartheid comparison does not stack up. Apartheid in South Africa maintained privilege for the white minority and doomed people of color to subservience; it determined every aspect of life — the school you attended, the work you did, where you lived, which hospital and ambulance you used, whom you could marry, right down to which park bench you could sit on without facing arrest. I know this because I lived it.

Unlike nonwhite South Africans under apartheid, however, Israeli Arabs have the vote and enjoy full citizen rights. The Supreme Court has an Arab judge, the head of surgery in a leading hospital is Arab, and Arabs head university departments. In hospitals and clinics, Jewish and Arab doctors and nurses, secular and religious, work together, giving care equally to Jewish and Arab patients — unthinkable under apartheid. Even the current right-wing government has pledged billions of dollars to upgrade Arab living conditions and education (though it has yet to deliver much)

Buttu’s inflammatory lies, unchallenged by Amanpour, included: “They [the Israelis] try to get us off our land, to steal Palestinian land, to gun us down, to shoot to kill us.” Amanpour seems oblivious to the fact that none of this is true.

“[Israelis] steal Palestinian land” has long been a staple of the largely bogus Palestinian narrative. The reality is that the Jewish communities in the West Bank were often built on property purchased from private owners, including from leading Arab anti-Zionist families like the Khalidis, Husseinis, and others.

Buttu’s claim that “settlements are illegal” goes unchallenged by Amanpour. In fact, the existence of Jewish communities in the area is enshrined in international law. The League of Nations Palestine Mandate, Article 6 calls for “close Jewish settlement” on the land west of the Jordan River. Article 6 is incorporated into the U.N. Charter. Further, the U.S. itself endorsed the Palestine Mandate in the 1924 Anglo-American Convention.

Clearly, the more things change, the more they stay the same when it involves Amanpour and Israel.

The most widely accepted journalistic code of ethics is that of the Society of Professional Journalists (SPJ). The SPJ code includes elements that are routinely violated by Amanpour, including the following:

Journalists should provide context. Take special care not to misrepresent or oversimplify in promoting, previewing or summarizing a story.