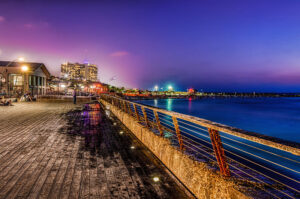 Media reports erroneously referring to Tel Aviv as Israel’s capital have been a persistent problem for years, but Arabic-language journalists writing for Western media outlets have displayed a special penchant for the pitfall. In both quantitative and qualitative terms, Arabic-speaking journalists greatly surpass their English-language colleagues in their commission of this media malfeasance, leading to patently absurd formulations including “Tel Aviv considers all of Jerusalem its capital.”

Over the last several years, CAMERA prompted numerous corrections after various media outlets from many countries including France, India, the United States, the United Kingdom, and even Israel used Tel Aviv as a metonym to the Israeli government, echoing the journalistic practice of citing a nation’s capital city as shorthand for the country’s government. Last Thursday, American Newsweek was the most recent addition to this list. Earlier this month, CAMERA Arabic compelled rarer corrections: four Arabic reports at CNN and AlHurra. 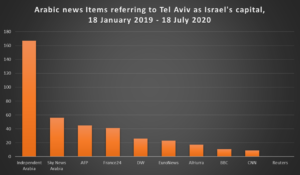 But the four corrected Arabic-language items at the two American outlets, reported here for the first time, are just the tip of the iceberg when it comes to Arabic-language media referring to Tel Aviv as Israel’s capital. Thus, in the 18 months between January 2019 and July 2020, CAMERA Arabic counted no less than 400 references to the Israeli authorities, leadership or the whole country as “Tel Aviv” in nine Western media outlets with Arabic reporting (see chart at left). Fifty-four were the work of just one journalist: Amal Shehadeh, Independent Arabia’s Israel correspondent, an Israeli citizen who served on Nazareth’s municipal council on behalf of Hadash.

Indeed, the prevalence of the problem in Arabic media means that it crops up even when the context renders the Tel Aviv reference absolutely ridiculous. For example, an Independent Arabia analysis from October 2019 referred to HaTikvah, Israel’s national anthem, as “Tel Aviv’s anthem”; another Independent analysis referred to the entire group of Palestinians in Israeli prisons across the country as “Palestinians detained within Tel Aviv.” Perhaps the most absurd case of the Independent using the city’s name was its tortured editing of an Agence France Presse report from last April, in which AFP’s original “Israel” became “Tel Aviv,” yielding the following result: “Tel Aviv considers all of Jerusalem its capital.” Not dissimilar was CNN’s Arabic report from February: “Tel Aviv was granted American recognition of Jerusalem as Israel’s capital.”

As previously observed by CAMERA UK’s Adam Levick, English-speaking journalists who commit the Tel Aviv error fall into one of two groups: those who are genuinely ignorant about the location of Israel’s government in Jerusalem versus those who practice “advocacy journalism” and are motivated by a pro-Palestinian ideology. The aforementioned cases in which Arabic journalists opted for Tel Aviv even when the context ruled out any reasonable conclusion that the “non-stop” city is Israel’s capital suggest that these journalists belong to the latter group.

In some cases, the apparent eagerness to cover up any association between Israel and its designated capital, Jerusalem, fueled outright fabrication. For instance, BBC journalist ‘Ali Hashem dubbed a June 2019 meeting between Israeli, American and Russian national security advisers “the Tel Aviv summit.” The meeting took place in Jerusalem. An August 2019 report by France 24’s Arabic department referred to Ambassador David Friedman as “the American ambassador in Tel Aviv,” as did other outlets like Euro News (June 2019) and Independent Arabia (five times between June 2019 and June 2020).

Against this background, any correction of the error in an Arabic-language news item is a significant success. 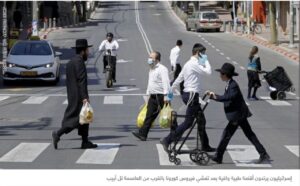 In addition, AlHurra editors corrected three AlHurra articles from this month which had referred to Tel Aviv as a metonym for the Israeli government (“New Hypotheses Regarding the Explosion of the Natanz Nuclear Facility – Was it Targeted by an Internal Bomb?”“Iran’s ‘Propaganda’ Missiles in Syria – Messages by Assad and Tehran from ‘the Deal’,” “Jordan in the Face of a Political Storm”). Editors replaced “Tel Aviv” with “Israel” and amended the phrase “between Amman and Tel Aviv” to “between Jordan and Israel.”