The Code of Ethics of the National Press Photographers Association calls on journalists to “Be accurate and comprehensive in the representation of subjects.” The Daily Beast, which promises “independent journalism, pursued without fear or favor,” last week ran roughshod over that guideline, misrepresenting a demonstrator protesting against Prime Minister Benjamin Netanyahu as a foreign journalist attacked by Israeli police. 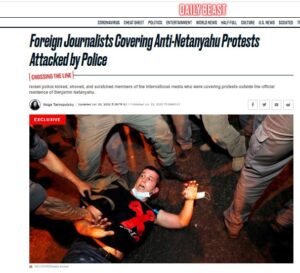 Police detain an Israeli man during a protest against Israeli Prime Minister Benjamin Netanyahu and his government’s response to the financial fallout of the coronavirus disease (COVID-19) crisis outside Netanyahu’s residence in Jerusalem July 22, 2020. REUTERS/Ronen Zvulun TPX IMAGES OF THE DAY

The subject, demonstrator Uri Yerushalmy, is clearly not a foreign journalist, as other media outlets have reported about him.Haaretz, for instance, referred to him as “the demonstrator, 28-year-old Uri Yerushalmy of Tel Aviv.”
In addition, while journalist Noga Tarnpolsky, who herself reported being roughed up by police, repeatedly stated in the Daily Beast article that the protesters were “peaceful,” the police spokesman told CAMERA that Yerushalmy had swung an iron bar at police. According to the spokesman:

It is a shame that the photo taken presents only a partial picture of a few seconds of the severe violence that preceded the photo that was directed directly atpolice officers at the scene.  During the protest that escalated into a violent incident and disturbances, a police officer was bitten by a female demonstrator who was being evacuated from the road at the time of the protest.

We view violence directed at police officers as a serious incident and will not allow violent protesters to attack officers or border policeman. 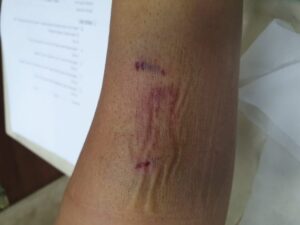 In addition, the police spokesman provided CAMERA with a photo of the injury sustained by a cop bitten by the female demonstrator.
According to Daily Beast’s Code of Ethics: “Violence is, unfortunately, part of life and ignoring it does not serve the public good.” If the Daily Beast truly reports without “fear or favor,” then it ought to apply this guideline consistently, and not ignore reported violence on the part of protesters, including those confronting Israeli police and opposing Prime Minister Netanyahu.
CAMERA has contacted Daily Beast editors requesting clarification of the photograph’s subject and of the reported violence on the part of some protesters, according to the police.
See also “Daily Beast Falsely Attributes Claim About Jeffrey Epstein Money to PM Netanyahu“
Donate Now