For the several years that Christiane Amanpour has reported on CNN as Chief International Correspondent, a particular narrative has dominated her numerous discussions dealing with Israel. CAMERA documented in 2010 how Amanpour has “an impulse to smear Israel … inject[ing] mention of Israel and its alleged myriad faults.” A long list — going back to 1996 — of Amanpour’s misreporting about the Jewish state is found on CAMERA’s Amanpour page.

Her hour-long broadcast normally airs Monday through Friday afternoons on CNN International (and is occasionally simulcast on CNN) and the same broadcast is repeated late the same night on PBS stations across the United States as Amanpour & Company.

In the April 24 broadcast’s discussion about “nations creeping towards authoritarianism amid the battle against coronavirus… [consistent with] the authoritarian playbook,” Amanpour included this: “We have seen in Israel — [Prime Minister] Benjamin Netanyahu has closed down the courts. Some say because he didn’t want to have his own trial run through the courts at this time.”

This allegation had been refuted by Tamar Sternthal, Director of CAMERA’s Israel Office, responding to the same disinformation from others: “But Netanyahu did not shut down the courts. Nor did he delay his own trial. Nor have the courts been shuttered, though their activities have been curtailed [due to the pandemic]… it was Justice Minister Amir Ohana, a Netanyahu ally, who ordered the courts to restrict their activity.” 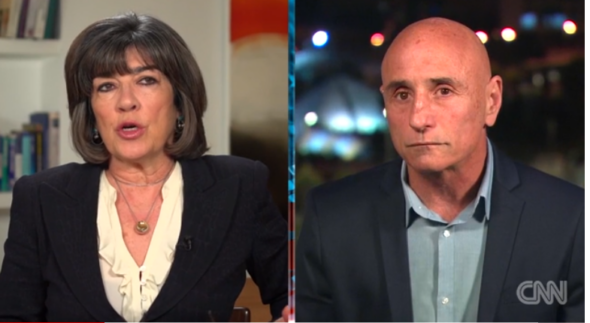 Amanpour in London, Shelah in Jerusalem (screenshot from April 23 broadcast)

The first of the three segments of the April 23 broadcast consisted of a conversation with Ofer Shelah, a journalist well-known in Israel and the head of Israel’s Knesset committee on coronavirus. Shelah, an opponent of Netanyahu, is architect of his Blue and White party’s efforts to form a government with the support of the Joint Arab List, a group which includes several Israeli Arabs that mainly oppose Israel’s right to exist as a Jewish state.

Amanpour mentioned that Prime Minister Netanyahu “has been indicted on charges of bribery, fraud and breach of public trust, [but] remains in the role for 18 more months.” Conveniently, she failed to mention here that Netanyahu denies the charges, attributing them to political enmity. And she fails to note that despite the indictment he remains popular with a majority of Israelis and his Likud party is currently the country’s largest party in the Knesset.

The CNN star correspondent initiated the conversation with Shelah by asking, “Many have looked at the success that Israel has had in terms of the fairly low number of infections and very low number of deaths. Can you give us a status report?” “We are definitely in a relatively good situation, certainly, when you look at certain European countries, regarding the health situation in Israel. But my committee and myself think that it’s time to open up Israeli life …” replied Shelah.

Amanpour began to focus in on her target, the prime minister: “So, would you give good marks to the prime minister for handling of this crisis? And also, we hear on the Palestinian side, they have received, you know, praise from those who are watching how they’ve been handling it. There was some complaints, though, that the Palestinians said, checkpoints they had put up were taken down by Israeli forces, and a testing clinic in East Jerusalem was closed.”

But Shelah failed to take the bait: “I am not familiar or exactly familiar with those complaints. I deal with the coronavirus internally in Israel. I will say that as far as I know, the idea and Israel in general are doing much to keep the COVID disease at bay at – in Judea and Samaria, because, you know, it’s our doorstep, as well.”

Concerning the “complaints” — aside from Palestinian sources, there is little information about the checkpoint matter. But Barron’s reported on April 30 that “At the [Palestinian] Ein Yabroud checkpoint, a key priority has been preventing the Israeli army from entering the village during patrols or raids.” According to this report, then, the purpose of at least some of the checkpoints erected by Palestinians is to hamper Israelis patrolling for terrorists.

As to a particular “testing clinic in East Jerusalem [that] was closed,” the Times of Israel reported that Israeli forces shut down a coronavirus testing facility due to staffers’ affiliation with the Palestinian government. Israel considers it illegal for the Palestinian Authority West Bank government to carry out operations in Israel’s capital city of Jerusalem. Amanpour, a veteran of reporting from the region, should know this. But she withheld this context from viewers, apparently preferring them to believe Israel wants to hamper efforts to protect Palestinians from the coronavirus.