On Feb. 20, readers were exposed to another example of sloppy, unprofessional journalism by the editors of Ha’aretz’s English edition. A headline about the participation of Khader Adnan – a former Palestinian administrative detainee who had staged a hunger strike last year – in the current hunger strike of four Palestinian prisoners read as follows: 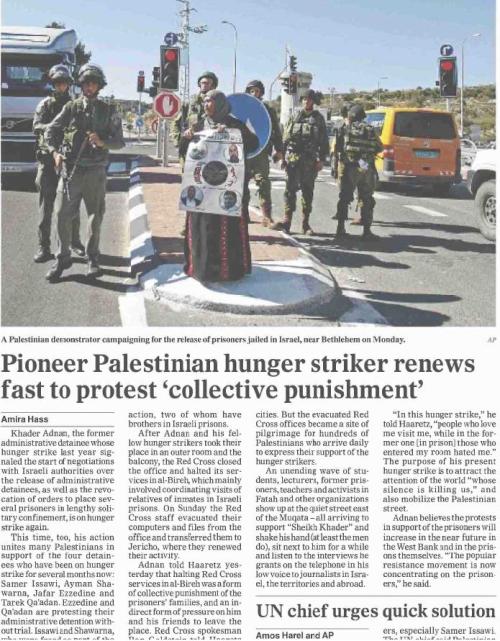 It is not difficult to figure out the message of this headline–  that Israel allegedly practices “collective punishment,”  a term generally used in conjunction with Israel’s actions in the territories, along with “ethnic cleansing,” “apartheid,”and, occasionally,  “genocide” and “war crimes.”

Indeed, one has to delve deeper into the article by Amira Hass to realize that the headline writer was clearly confused about the facts.   Khader Adnan, an administrative detainee who had carried out a two-month hunger strike before his eventual release, decided to launch a new hunger strike at the Al Bireh offices of the Red Cross, near Ramallah.  But following Adnan’s decision to carry out a hunger strike there, the Red Cross closed its Al Bira office, halting its services at that location. The organization transferred its computers and files to its Jericho office. Amira Hass reported:

Adnan told Haaretz Tuesday that halting Red Cross services in al-Bireh was a form of collective punishment of the prisoners’ families, and an indirect form of pressure on him and his friends to leave the place.

Ha’aretz editors evidently took note of the headline writer’s embarassing mistake and hurriedly changed the headline to the following:

Editors of the Israeli newspaper referred to most frequently by the foreign media cannot afford such amateurish and careless oversight, but this is exactly what they do time after time after time.