In an article last week about dramatic moments at the United Nations (“Laughter at Trump among a long line of shocking UN moments“), the Associated Press covers up the most dramatic element of Yasser Arafat’s 1974 United Nations address: that he brought a gun to the international body and even delivered the address while openly sporting the holster.

Yasser Arafat was the embodiment of the Palestinian quest for independence – a road littered with displacement and death. In 1974, he was invited to represent the Palestine Liberation Organization and his people before the world body, where he made it clear he was ready to use any means for statehood. He spoke of oppressed people and liberation the world over. Wearing his trademark Palestinian keffiyeh scarf, he concluded with an enduring quote: “Today I have come bearing an olive branch and a freedom fighter’s gun.Do not let the olive branch fall from my hand.”

While the piece explicitly notes that Arafat wore a keffiyeh, it leaves out the much more significant and historic fact that he wore a gun holster. (According to an earlier AP report, he was forced to deposit the gun before mounting the rostrum.)

AP’s Sept. 28 2012 account of the same speech explicitly stated in the heading “Yasser Arafat brings his gun to the U.N.” It also contained the key information omitted from last week’s report: “Arafat appeared wearing his gun belt and holster, reluctantly removing his pistol before mounting the rostrum.” The full relevant passage from AP’s article from six years ago states (“Some memorable props used by speakers at the UN“) stated:

Yasser Arafat brings his gun to the U.N.

When Yasser Arafat spoke at the United Nations General Assembly in 1974, Israel was incensed. But for the Palestinian Liberation Organization leader it represented recognition for their struggle for a Palestinian state. To emphasize his revolutionary credentials, Arafat appeared wearing his gun belt and holster, reluctantly removing his pistol before mounting the rostrum. He told the world body, “Today, I have come bearing an olive branch and a freedom-fighter’s gun. Do not let the olive branch fall from my hand.” 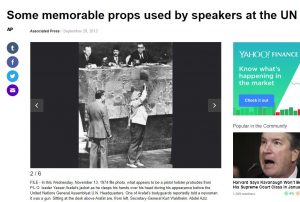 Moreover, an Associated Press photograph which appears alongside the 2012 item in the above link appears to show a holster on Arafat’s hip at the time he gave his 1974 speech. The AP’s own caption reads:

In this Wednesday, November 13, 1974 file photo, what appears to be a pistol holster protrudes from P.L.O. leader Yasser Arafat’s jacket as he clasps his hands over his head during his appearance before the United Nations General Assembly at U.N. Headquarters. One of Arafat’s bodyguards reportedly told a newsman it was a gun. …

CAMERA contacted the Associated Press about the misleading item by Fakahany, AP’s deputy director of global news coordination, on the day that it appeared last week. The news agency neglected to amend the report to make clear that Arafat brought his gun to the U.N. and delivered his address while wearing the holster.