A caption under a photo by Turkey’s state-run Anadolu news agency described the image of silhouetted figures holding a Palestinian flag and hurling stones as a pro-Palestinian partisan might: “Palestinians throw stones in response to Israeli forces’ intervention during an anti-occupation rally near the Gaza Strips [sic] northern border in Gaza City, Gaza on September 18, 2018.”

That same day, the same photo appeared in the New York Times, with essentially the same caption: “Palestinians threw stones in response to Israeli forces’ intervention during an anti-occupation rally near the Gaza Strip on Tuesday.” 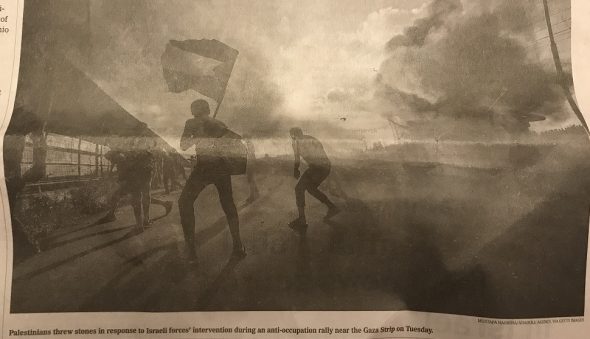 Those who made out the tiny font of a photo credit that appeared at the bottom right of photo would know the image came from Anadolu. But even such keen observers would likely view the caption as coming from the New York Times — or at least, as being accurate. Neither appear to be the case.

The source of the caption matters. Anadolu has been dubbed as “the Turkish Government’s Propaganda Machine” by Vice and “Erdoğan’s propaganda machine” by Turkish journalists sheltering in Sweden and writing for the Stockholm Freedom Center. Recep Tayyip Erdoğan, Turkey’s president, is notoriously anti-Israel. One might expect him to spin Palestinian violence as a “response” to Israeli “intervention,” as did Anadolu and then the New York Times.

But even the “world’s worst jailer of journalists” can be right sometimes. So was it the case on Sept. 18 that Palestinians were peacefully rallying when Israeli forces “intervened”? Is it true that this was merely an “anti-occupation rally”? Is it even true that the image was taken “near the Gaza Strip.”

The original caption helps answer the last of those questions. Anadolu says the clashes took place “near the Gaza Strip’s northern border in Gaza City,” or in other words, inside the Gaza Strip. That makes sense. Palestinian stone throwers don’t riot on Israel’s side of the Gaza border, but rather on Gaza’s side of the border fence, as they have been doing since last March.

And those clashes that began last March were not mere “anti-occupation” rallies, as Anadolu and the Times suggest. They have been part of the so-called Great Return March, which demands a right of return for 30,000 refugees from the 1948 war and millions of their descendants. The distinction is important, not only because accuracy is always important, but substantively because the claim of a “right of return” is widely understood as a call for ending Israel through demographic means.

Finally, the New York Times seems to be reversing cause and effect. According to Saud Abu Ramadan, a Palestinian freelance reporter writing for Deutsche Presse-Agentur, “The demonstrators threw stones and burned tyres close to the fence of the border. Israeli soldiers responded with force when the protesters tried to cut the fence’s barbed wire.” (“The protests were part of a series of demonstrations that started March 30 by Palestinians demanding the right to return,” he added.)

In other words, the New York Times caption was wrong on all three counts. It was Israel that “responded” to Palestinian attempts to destroy the border separating them from the Hamas-ruled Gaza Strip, not the Palestinian rioters who responded to Israeli “intervention.” The rioters were demanding a “return,” or more to the point the influx of millions of Palestinians from Gazan into Israel. And, of course the riots didn’t happen “near” the Gaza Strip but rather inside the territory.

CAMERA has called on the New York Times to correct the caption.