Almost every day brings new evidence that the New York Times cannot be trusted as an authoritative source about anything related to Israel and the Palestinian-Israeli conflict. It has simply become a propaganda source, where history and current events alike are distorted and ordinary professional norms of objectivity are cast aside.

A case in point is the lengthy “analysis” of the controversial Oslo peace process that appeared on the front page of the newspaper on September 13, 2018, entitled “25 Years After Handshake, Mideast Peace Seems Remote as Ever.” 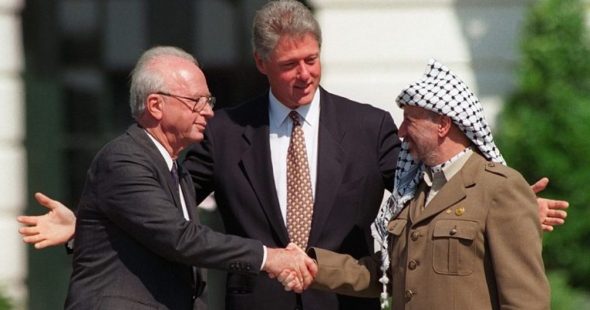 Written by Jerusalem bureau chief David Halbfinger and longtime Jerusalem-based correspondent Isabel Kershner, the account is crude in its distortions of history, falsehoods, and contradictions. A conspicuously disproportionate number of quotes are invoked to attack and denounce Israel while the single most important factor that determined the fate of Oslo – i.e. the repeated Palestinian rejection of Israeli peace offers that would have given them a state was concealed. Instead, readers were offered a 2000-word indictment of Israel as the oppressor of blameless Palestinians.

Similarly, the anti-Israel, annihilationist aggression expressed in word and deed by Palestinian leaders is virtually invisible in the article about the demise of the Oslo accords. (Indeed, in keeping with its habit of  downplaying, concealing or deflecting attention from Palestinian terrorism, the New York Times published no articles about the stabbing murder of Ari Fuld, an American-Israeli civilian by a Palestinian terrorist that occurred just days after this analysis was published.)

Below is just a small sampling of the Times’ Orwellian account of Oslo.

This is how the article introduced the Oslo accords. The bracketed words in red, added by CAMERA, were omitted by the New York Times, painting an image of a peace-loving PLO and a rejectionist Israel:

The Oslo accords, first unveiled on the White House lawn with a handshake between Yitzchak Rabin and Yasir Arafat on Sept. 13, 1993, culminated in mutual recognition between Israel [CAMERA: which the PLO had long sought to destroy] and the Palestine Liberation Organization, which Israel had long banned as a terrorist organization, and the first formal agreements in a phased effort to resolve the century-old conflict.

• The New York Times readily reports Palestinian terrorism as an Israeli allegation, but rarely as a clear, indisputable fact. Why did Israel ban the PLO as a terrorist group? Readers should not expect the answer — a discussion or history of the PLO’s airplane hijackings and mass murders — on the pages of this newspaper.

Compare the newspaper’s description of what amounts to the wholesale Palestinian slaughter of hundreds of Israelis following Oslo and during the second Intifada with the description of a murderous terror attack by an Israeli following the killings by Palestinians of several of his friends and acquaintances.

“Whatever the justification, Palestinian violence crippled the peace process and led to other setbacks: Israel’s re-invasion of West Bank cities in 2002, when it destroyed much the authority had built, and its construction of a barrier wall that bred resentment, entrenched some land grabs and – in achieving the laudable goal of reducing terrorist attacks – allowed Israelis to largely tune out the Palestinians and the occupation altogether.” [emphasis added]

“It was a right-wing Israeli extremist who massacred 29 Muslims in Hebron in 1994, setting off a first wave of bombings and another who assassinated Mr. Rabin in 1995, gravely imperiling Oslo. It was Israel that halted agreed upon withdrawals from occupied territory, leaving itself in full control of 60 percent of the West Bank. Israel’s unilateral withdrawal from Gaza was so abrupt that critics say it contributed to the Hamas takeover.”

• The reference here to Palestinian violence is enveloped in paragraphs blaming Israel for dooming the Oslo accords; Palestinian terrorism is criticized only insofar as it “allows” Israel (in New York Times’ parlance) to allegedly reject peacemaking efforts.

• While a “justification for violence” is suggested in connection with Palestinian terrorism, Israelis are not only condemned for violence but for peaceful actions, as well. For example, even Israeli withdrawal from Gaza is condemned as a negative.

The piece conceals the fact that the Palestinian leadership walked away from the negotiating table, rejecting Israeli offers of statehood three times. Instead, the article discusses Palestinian intransigence in terms of principled perseverance and distorts history by suggesting it was Israeli leaders, rather than the Palestinians, who “sidelined” the peace process:

An increase in terrorist attacks after Oslo’s signing followed by the deadly Second Intifada that erupted in 2000, soured many Israelis on peacemaking and eventually led Israel to sideline the process. [emphasis added]

Stacking the Decks Against Israel

There are no interviews or quotes with any Israeli “man-in-the-street” compared to the multiple Palestinians who are interviewed or quoted in the article.

In addition to critics of Israel, the reporters, in their own voices, or attributed to unnamed “analysts” and “experts” portray the Palestinians as hapless victims of the Israelis who are falsely portrayed as controlling the Oslo process for their own benefit, yielding nothing and gaining everything. For example:

That the Palestinian Authority has endured and the peace process has collapsed attests to how much Israel has gained. Oslo made the Palestinians responsible for policing themselves in the West Bank, which has led to vast improvements in Israeli security from terrorism in recent years at little cost to Israel. It gave the authority responsiblity for providing services like sanitation and hospitals that would otherwise cost Israel, as the occupying power, hundreds of millions of dollars. And it has allowed Israel to postpone, seemingly indefinitely, a broader withdrawal from the West Bank.

• It is both contradictory and inaccurate to suggest that Oslo led to “vast improvements” in Israeli security while at the same time claiming that the increase in terrorism following Oslo “allowed” Israelis to “tune out” the Palestinians and “the occupation. ” Nor is it accurate to suggest that the Israeli leadership entrusts the security of its citizens to the Palestinians.

By contrast, criticism of the Palestinians – including by the two who are quoted to present the Israeli position is far more muted and delicate. For example:

Some Israelis argue that the Palestinians have still not tempered their ideology sufficiently to persuade them that Palestinian statehood need not threaten Israeli identity.

“Arafat didn’t do enough to stop terror,” said David Hacham…“either because he couldn’t or because he didn’t see it as important enough at the time.”

At the beginning of 2002, the IDF intercepted a ship from Iran, the Karine A, destined for the Palestinian Authority and filled with enough hidden weapons to supply an army. While Arafat denied involvement, claiming this was Israeli propaganda, the evidence overwhelmingly implicated him and his PA.

Later that year, during Operation Defensive Shield – an IDF military campaign to stop Palestinian terrorism – multiple documents were found attesting to the direct funding by Arafat and his Palestinian Authority of terrorists, their weapons and terrorist infrastructure. A BBC investigation, too, found that Arafat and his PA funded the terrorists from the Al Aqsa Martyr’s Brigade, as well as their production of weapons. This unit was officially the armed branch of Arafat’s Fatah party, but was designated a terrorist organization by the U.S., Canada, the European Union, Japan, and New Zealand because it carried out numerous suicide bombings and shooting attacks and was responsible for the deaths and injuries of dozens of civilians. (See here and here.)

Arafat was known as a master of doublespeak, speaking in diplomatic language to an international audience while urging his people to wage violent “jihad” and “armed struggle” against Israel. Just a year after signing the Oslo II Accords, Arafat was reported to have promoted “jihad” against Israel. Later, he was quoted in the official PA daily, calling on his ‘colleagues in struggle and in arms” and “in jihad” to ‘intensify the revolution and the blessed intifada” and to “burn the ground under the feet of the invaders [meaning Israel].”

Arafat’s phased plan to replace the Jewish state with a Palestinian one is described by historian Efraim Karsh, who in turn cites the “Political Program for the Present Stage Drawn up by the 12th PNC, Cairo, June 9, 1974”:

This [phased] strategy, dating from June 1974, has served as the PLO’s guiding principle ever since. It stipulates that the Palestinians should seize whatever territory Israel is prepared or compelled to cede to them and use it as a springboard for further territorial gains until achieving the ‘complete liberation of Palestine’.

New York Times readers, however, will not learn the truth about the Oslo Accords, Palestinian terrorism, or the factors contributing to the Palestinian-Israeli conflict from that newspaper. With crude propaganda increasingly substituting for objective fact-seeking, the question is whether the one-time “paper of record”can be trusted  as an authority on any topic it covers.