Nothing piques human interest like a news story starring our beloved friends in the animal kingdom. It’s not surprising, then, that our four-legged companions and their less domesticated compatriots dwelling in zoos garner significant news coverage.

Crossed with journalists’ most obsessively covered region, the irresistible man’s-best-friend subject has bred a bounty of news coverage focused on animal welfare in the Palestinian territories. 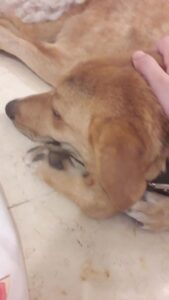 An abused dog from the West Bank saved by the Bethlehem shelter, 2020 (Photo by CAMERA staff, for illustrative purposes)

While several Israeli media outlets (with the notable exception of Haaretz) covered the influential public figure’s outrage-inducing call for extreme cruelty towards dogs, the only foreign English-language mainstream media outlet to cover the alarming story was The New York Post.

The mayor of Hebron offered 20 shekels to anyone who kills a dog in his city. Palestinians took to the streets, torturing and killing dozens of dogs. pic.twitter.com/VnxGvOwwqQ

According to The Jerusalem Post (“Terrorist mayor of Hebron offers reward for killing of stray dogs“):

The mayor of the Palestinian West Bank city of Hebron announced on a radio broadcast earlier this week that Palestinians who capture or kill stray dogs will receive NIS 20 shekels from the municipality, local and foreign Arab media reported.

Mayor Tayseer Abu Sneineh, a convicted murderer of six Israelis, proposed this bounty on stray dogs in the Hebron area as a solution to the overpopulation of stray dogs in the city, which Palestinian media say is “haunting the lives of Hebron residents.”

Some Palestinian residents soon complied, with footage shared on social media of Hebron residents taking to the streets to torture and kill dozens of dogs. . . .

In response to the bizarre municipal campaign, the Animal and Environment Association in Bethlehem, the only animal shelter in the West Bank, issued a statement attacking Abu Sneineh, calling for him to “cease the bloody campaign.”

“This bloody campaign resulted in killing many dogs, [by] shooting, hanging, abusing, running over them by cars. What happened today is beyond humanity and ethics,” the association wrote on Facebook. “No religion would accept such barbaric actions toward innocent animals.”

The silence at leading news agencies Associated Press, Reuters and Agence France Presse on the mayor’s call to kill dogs provides a striking contrast to previous intensive coverage concerning animal welfare in the West Bank or Gaza Strip. Alongside the Hebron mayor’s reportedly walked-back call to kill the dogs, the Tulkarem municipality announced (screenshot at left) that it assembled a “special team” to work with police forces to shoot dogs dead at night.

A new animal clinic has opened in the occupied West Bank, part of a growing tendency among Palestinians to raise and pamper pets.

Veterinarian Ahmed Al-Amad’s “Royal Care Vet Clinic”, in the city of Nablus, is one of the few facilities in the Palestinian Territories offering grooming services for cats, dogs and other animals, and boarding while their owners travel.

Pet ownership has become more common in the West Bank and Gaza Strip in recent years, where some Palestinian supermarkets now have designated sections for animal food and accessories.

Associated Press and Agence France Presse coverage on animal welfare in the Palestinian territories all stick to the same script showcasing Palestinian compassion and sacrifice on behalf of animals, even in the face of hardship.

Though the Associated Press has displayed less interest in covering our furry companions, it has nevertheless touched on their fate in the past, likewise adhering to the familiar narrative of Palestinian compassion and care, with “Gazans defy taboos to rescue, neuter stray animals,” and “Gaza parrot gets treatment from Israeli animal rights group.”

As soon as events took a less warm and cuddly turn, news agencies bolted, abandoning their previously doted-upon subjects to those loyal Palestinians and Israelis who extend a helping hand, even as the international press looks away.

With thanks to CAMERA Arabic.