CAMERA’s Israel office today prompted significant improvement of a Deutsche Welle article about a Turkish news outlet which was hit Saturday in an Israeli airstrike in the Gaza Strip. In an egregious omission, the May 4 article by Germany’s public international media outlet failed to report that Anadolu, Turkey’s state-run news agency, was housed in the same building as  Hamas military intelligence and security offices, which was the target of the strike (“Israel hits offices of Turkish state news agency in Gaza“). 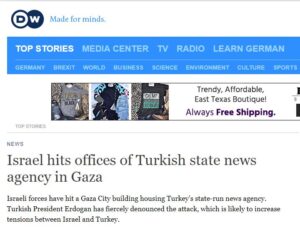 Although the article ignores Hamas’ presence in the building, it repeatedly cites the bombing of the Anadolu Agency, which was not the target of the strike. Aside from the headline, the subheadline emphasized: “Israeli forces have hit a Gaza City building housing Turkey’s state-run news agency. . . ”
In addition, the article itself stated:

Other news agencies which reported that the Turkish news agency was hit noted that it was housed in a building that Israel says was also occupied by Hamas.
Agence France Presse reported yesterday (“250 rockets fired from Gaza. . . “):

Israel said one of the buildings included Hamas military intelligence and security offices.

Turkey said an office for its state news agency Anadolu was located in the building and strongly condemned the strike. (Emphasis added.)

CNN reported: “Turkey has condemned a strike on a building housing the office of its state-run Anadolu news agency, a building which Israel says is also used by Hamas’s military intelligence.” (Emphasis added.)
Reuters reported:

Two multi-storey buildings in Gaza City were destroyed by Israeli raids. One, the Israeli military said, housed Hamas’s intelligence and security offices. The other housed Islamic Jihad facilities, Palestinian sources said.
Witnesses said the Israeli military had warned people inside to evacuate the buildings before they were bombed. One of them also housed the office of the Turkish state-run Anadolu news agency. (Emphasis added.) 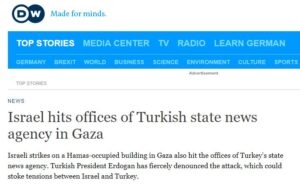 In response to communication from CAMERA, Deutsche Welle commendably amended the subheadline to note that Hamas occupies the building. The revised headline states: “Israeli strikes on a Hamas-occupied building in Gaza also hit the offices of Turkey’s state news agency. …”
In addition, editors added key information that the army was targeting Hamas offices into the text of the article itself. In the updated article, the third paragraph states: