Israel has exercised full administrative control over the territory, where some 2 million Palestinians live, since the Six Day War of 1967. 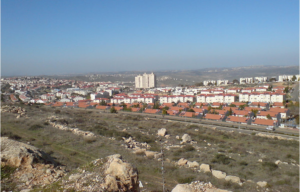 A view of Ariel, West Bank (Photo by Salonmor/Wikimedia) 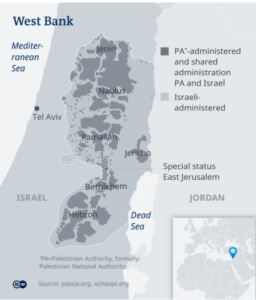 A map previously published in Deutsche Welle accurately shows Areas A and B versus Area C of the West Bank. (Screenshot at left.)

In a separate error, the article misleadingly stated as fact: “The settlements are considered illegal under international law.”

Yet, there are experts in international law who dispute this view, among them Prof. Julius Stone and former U.S. Undersecretary of State Eugene Rostow. In addition, then Secretary of State Mike Pompeo acknowledged in 2019 that “The establishment of Israeli civilian settlements in the West Bank is not per se inconsistent with international law,” reverting to a position earlier voiced by President Reagan. Reagan had said: “As to the West Bank, I believe the settlements there — I disagreed when the previous Administration referred to them as illegal, they’re not illegal,” “Excerpts From Interview With President Reagan Conducted by Five Reporters,” New York Times, Feb. 3, 1981.)

In response to communication from CAMERA, Deutsche Welle promptly corrected both points. Regarding control of the West Bank, the amended text now accurately reports:

Israel exercises partial administrative control over the territory, where some 2 million Palestinians live, since the Six Day War of 1967.

In addition, on the question of the settlements’ legality, the corrected story currently states:

The United Nations and most member states, including Germany, consider the settlements illegal and a violation of international law.

In addition, a correction appended to the bottom of the article commendably alerts readers to the changes:

This text was modified on October 25 to more precisely reflect attitudes of the international community and corrected to note that Israel exercises only partial administrative control over the territory.