A United Arab Emirates delegation landed in Israel last week to cement the normalization deal between the two countries, signing documents to advance investments, cooperation in science and innovation, civil aviation and visa exemptions. The sharing of false media reports was of course not among the discussed common interests. Nevertheless, earlier this month, an Israeli news site, relying on an Arabic report from a media outlet which is partly Emirati-owned, published inflated figures about Arab approval of the normalization. The Hebrew misinformation then found its way into English-language media outlets. CAMERA, together with its Arabic department, prompted corrections on the topic in English, Hebrew and Arabic. 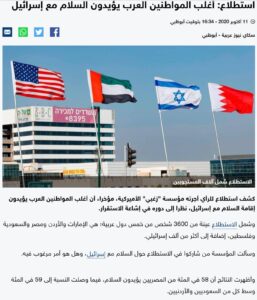 Screenshot of the Sky News Arabia article, before it was amended

The Sky Arabia article was covering the surprising selected findings of the recently released Zogby Analytics poll entitled “The Annexation Debate: Attitudes in Israel and Key Arab States.” While the article correctly reported that most Emiratis (56 percent) and a minority among Palestinians (31 percent) consider normalization with Israel before the Palestinian conflict is solved “desirable,” Sky erred concerning public opinion in Jordan, Saudi Arabia and Egypt (translation by CAMERA Arabic): “Results show that 58 percent of Egyptians support peace. The rate reached 59 percent among both Saudis and Jordanians.”

The Zogby Analytics poll (page 20 and screenshot below) puts the figure for Egyptians who support normalization with Israel prior to the resolution of the Palestinian issue (per the “Abraham Accords”) at 42 percent — not 58 percent, as reported. In addition, the Zogby poll found 41 percent of Jordanians and Saudis in support of normalization, not 59 percent. The journalist conflated the figures for Jordanians, Saudis, and Egyptians who found normalization with Israel without solving the Palestinian issue “undesirable” with those who found it “desirable.”

A separate question in the Zogby poll not addressed in the Sky Arabia article asked respondents about their views of President Donald Trump’s “Peace to Prosperity” plan between the Israelis and Palestinians, and the results indicated surprisingly high support: 54 percent of Egyptians were “somewhat favorable” or “very favorable,” a total of 49 percent of Jordanians were favorable, 58 percent of Saudis, 68 percent of Emiratis, and 18 percent of Palestinians.

Another Zogby finding which suggests that “most Arab citizens support peace with Israel,” as the Sky Arabia headline put it, was a question about the 2002 Arab Peace plan, which was a very different deal than the “Abraham Accords.” On this point, Zogby’s poll found even higher support among the Arab public. Among Egyptians and Saudis, 39 percent of Saudis support that plan “if Israel returns all territories occupied in the 1967 war including East Jerusalem, and solves the issue of the refugee.” According to the Zogby poll, an additional 40 percent are in favor of the Arab plan as detailed above but (correctly) do not believe that Israel will give up all of the pre-1967 areas (including, for instance, the ancient Jewish Quarter in Jerusalem’s Old City.) Among Jordanians, a total of 72 percent support the Arab Peace Initiative, but 28 percent don’t believe Israel will relinquish the territories; with Emiratis, those figures jump to 88 percent in total in support, with 46 percent not believing that Israel will give up the disputed territories. Even most Palestinians (67 percent) support the Arab Peace Initiative, though 37 percent believe Israel will not withdraw from disputed areas. Given that the vast majority of Israelis consider the 2002 Arab plan a total non-starter, vast Arab support does not mean that peace is on the horizon, and indeed, the plan was dead on arrival. But Sky News Arabia article referenced neither this question nor the aforementioned question on Trump’s “Peace to Prosperity” plan, and thus misleadingly attributed the “most Arabs support peace” figure to normalization prior to resolution of the Palestinian issue.

While the aforementioned question on the Arab Peace Initiative, not addressed by Sky Arabia measured whether respondents were conditionally “prepared for a just and comprehensive peace with Israel,” the question that the article did address asked about more palatable “normalization,” not “peace.”

Similarly, Israel Hayom‘s Oct. 12 English article had carried the erroneous subheadline: “According to the survey by US-based Zogby Analytics, 59% of Jordanians and Saudis, along with 58% of Egyptians and 56% of the residents of the UAE support normalization with Israel, while 61% of Palestinians oppose it.”

The article itself repeats these numbers, stating:

According to the survey, 59% of Jordanians and Saudis, along with 58% of Egyptians and 56% of the residents of the UAE support the normalization agreements between Israel and the Arab world, citing primarily regional stability and economic prosperity.
The poll said that 61% of Palestinians opposed the normalization process.

In response to communication from CAMERA Arabic, on Oct. 20, Sky News Arabia amended its misleading headline, which now more accurately states: “Survey: Arab support for peace with Israel.” However, as of this writing, editors have yet to correct the erroneous reporting within the article itself which had inflated Egyptian, Saudi and Jordanian  support for normalization prior to resolution of the Palestinian conflict.

According to the survey by US-based Zogby Analytics, 56% of the residents of the UAE and 41% of Saudis support the normalization agreements between Israel and the Arab world, as do 42% of Egyptians and 41% of Jordanians, while 69% of Palestinians oppose it.

Out all of the Arab, Israeli, and American media outlets that CAMERA contacted concerning inflated figures of the promising Zogby poll results, only one — The Washington Examiner — failed to make any effort to correct. The headline of Paul Bedard’s Oct. 16 Washington Secrets column erred: “Surprise: Majority of Arabs back Trump Middle East peace plan, 79% of Saudis.” CAMERA alerted Examiner editors that while 79 percent of Saudis support the Arab Peace Initiative (which predated Trump’s presidency by more than a dozen years and is so unfavorable to the Israeli side as to be a complete non-starter), only 58 percent support the President’s “Peace to Prosperity” plan, and 41 percent support “Abraham Accords” normalization. But the politically-conservative American media outlet has failed to dial down the inflated figure of Saudi support for President Trump’s peace plan despite the fact that the real number is itself very good news.

Sky News Arabia has commendably corrected the text of the article.