Judging from last Friday’s editorial, a Palestinian administrative detainee’s hunger strike has made a tremendous impact on Haaretz‘s editorial board. Their demand, as the headline says, is “Free Palestinian Hunger Striker Maher Akhras Now” (Oct. 16). They also call for an end to the practice of administrative detention of terror suspects.

Haaretz editors take issue with Israel’s Supreme Court judges, who denied the request of Maher Akhras for immediate release after he rejected an offer from the state that his administrative detention would not be renewed when it expires on Nov. 26 in exchange for ending the hunger strike. As Haaretz previously reported, “The detention could be renewed if new evidence concerning Akhras is received about the ‘danger expected from his release.'” According to reports, Akhras’ hunger strike has continued for over 80 days as of this writing.

Beyond the Akhras’ case, Haaretz‘s editors more broadly argue that administrative detention has “no place in a country governed by law,” and is “unacceptable in a democratic country.” Therefore, Akhras’ “request to be released unconditionally is justified like no other.”

In an earlier news story on Akhras’ case, Haaretz‘s Hagar Shezaf maintained: “Administrative detention involves no indictment, no revelation of confidential evidence, and no trial or judgment of the accusations against the prisoner.”

In the editorial, Haaretz defines the detainee, Maher Akhras, as someone whom “The state claims he is an activist in the Islamic Jihad organization – without presenting him with any evidence, as is acceptable in administrative detention cases.” Haaretz treats the state’s claim that he is a member of Islamic Jihad as suspect, and ignores publicly available indications that this is indeed the case.

In an extensive Op-Ed by Ilana Hammerman, Haaretz completely disregards the question of Akhras’ affiliation with Islamic Jihad, failing to even mention the state’s position that he is a member of an internationally designated terror organization.

Instead, Hammerman warns that Akhras “days are numbered if he is not immediately released” and casts him as a victim to “a reality that is entirely false” at the hands of “the embodiment of evil,” meaning the Israeli judicial system.

To recap, Haaretz makes three claims: 1) Administrative detentions have no place in a democracy; 2) They’re not subject to judicial review; and 3) It’s highly questionable whether Maher Akhras is indeed a terror operative.

All of the above are false.

Is there really no place for administrative detentions in an enlightened democracy? The Israel Democracy Institute, a serious liberal think tank, published a paper terming administrative detentions a “necessary tool” and “an important component in the struggle of a democracy defending against terrorism.” Despite “the problems that its use involves,” it certainly has a place in a state of law, argued Moshe Bachar, a member of the faculty at Hebrew University and Interdisciplinary Center Herzliya, and a Shin Bet former investigator. This use is justified, he wrote, because “[W]hen using administrative detention intelligently and proportionately, and in the appropriate cases only, what’s at stake at the end of the day is a temporary denial of the individual freedom, against saving the lives of many.”

Bachar termed administrative detentions “a necessity of reality” and “necessary evil,” and, as for demands to stop them, “in the current Israeli security reality, the time to comply has yet to come.”

In the words of Yitzhak Zamir, a former Israeli Supreme Court justice: “The administrative detention, even if it is objectionable, is a necessity . . . the sanctity of life outweighs individual liberty.”

No wonder that in contrast to Haaretz‘s claims, tools akin to administrative detention have been employed in the United States in its war against terror.

Indeed, following the judicial review of Akhras’ detention, he appealed to the Supreme Court, and it is this court’s findings that Haaretz opposes.

Third, is there any doubt regarding Akhras’ organizational affiliation? This is another Haaretz deception. 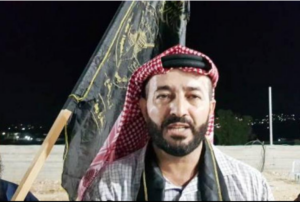 Photo from Asra Media, which also identifies Akras as “one of the leaders of Islamic Jihad”

In the photo at left, Akhras sports Palestinian Islamic Jihad’s scarf and flag.

In this Islamic Jihad video, the organization’s fighters call him “the commander.”

According to Joe Truzman, writing for the Foundation of the Defense of Democracies:

In the publication featuring some of PIJ’s arsenal and various images of destroyed Israeli homes, Ziad Nakhala, the Secretary-General of PIJ, called al-Akhras a “mujahid” — an acknowledgement of al-Akhras’ membership in Saraya al-Quds [the military wing of PIJ].

Here, Islamic Jihad threatens Israel that it will bomb its population centers in the south if Akhras is harmed.

And here, an Islamic Jihad poster threatens Israel not to harm him.

No wonder Israel’s Supreme Court accepted the state’s position according to which Akhras is an Islamic Jihad member.

Over the years, Haaretz has supported non-violent struggle for Palestinian statehood.

But the paper’s advocacy on behalf of Maher Akras, a commander in the Palestinian Islamic Jihad, a terror organization inspired by Iran’s Islamic revolution which strives for the liberation of Palestine from the river to the sea by means of Jihad (a holy war), is on an entirely different level.

Will active terrorists enjoy the paper’s support from going forward?

This article first appeared in Hebrew at CAMERA’s Presspectiva. Translated from Hebrew by Shlomi Ben Meir.