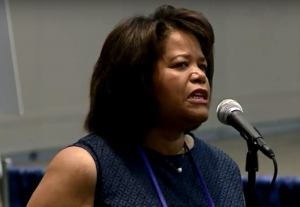 Rt. Reverend Gayle Harris, Bishop Suffragan from the Episcopal Diocese of Massachusetts, testified in favor of a one-sided resolution approved by the Episcopal Church’s General Convention in July. During her testimony, she told the denomination’s House of Bishops that she was there when a 15-year-old boy was shot in the back 10 times by Israeli soldiers. After challenges from the Simon Wiesenthal Center and the Committee for Accuracy in Middle East Reporting in America, Bishop Harris admitted she did not witness the events she described, but was merely passing on what she was told by unnamed sources. (YouTube screenshot.)

In mid-July 2018, Bishop Suffragen Gayle Harris, the second-in-command at the Episcopal Diocese of Massachusetts, testified in favor of the passage of a resolution that condemned Israel for alleged human rights abuses against Palestinian children, but said nothing about the Palestinian Authority and Hamas teaching children to hate Israel and inciting young people in the West Bank and Gaza Strip to attack Jews.

In her testimony, Harris described two terrible acts of Israeli villainy, and said “I was there” when they both happened. (These stories are debunked below.)

Harris’ irresponsible use of unverifiable and unsubstantiated atrocity stories prompted the Simon Wiesenthal Center and the Committee for Accuracy in Middle East Reporting to express their outrage to the Episcopal Diocese of Massachusetts where Gayle Harris serves as Suffragan Bishop. (For information about these actions, please read these articles here, here and here.)

In response to these complaints, the Episcopal Diocese of Massachusetts issued a statement on Aug. 9, 2018. In this statement, Rt. Reverend Harris admitted that she did not personally witness the events she described to her fellow bishops on July 13, 2018 but was passing on what she had heard from others during her trips to Israel.

She does not say who these sources are, nor does she provide any other confirmatory details.

In sum, nearly one month after Rt. Reverend Gayle Harris said “I was there” before recounting two terrible stories of Israeli wrong-doing, she has admitted that she did not see the events in question. In other words, she admitted wasn’t “there” even though she said she was.

The relevant passage section of the statement distributed by the Episcopal Diocese of Massachusetts reads as follows:

In response to several inquiries about testimony she gave at the recent Episcopal Church General Convention regarding safeguarding the rights of Palestinian children, Bishop Gayle E. Harris would like to clarify that events she described during her testimony were as reported to her by others over the course of several trips to Israel and were not witnessed by her at firsthand. Her personal narrative was not intended as a policy statement. (Emphasis added.)

Harris’ July 13, 2018 testimony in favor of the child’s resolution, which can be seen on Youtube here, reads as follows:

We do know that there are both sides share a story and there are different sides within each story. But this story is about the power of a state over an oppressed people and while Palestinians may throw rocks and burn tires and have graffiti, the Israeli government has used consistently weapons that are militaristic and are violent.

I was there a couple of years ago on the Temple Mount. A three-year-old little boy, a Palestinian with his mother, was bouncing a rubber ball. The ball happened to sort of roll away from him and go over the side down to the Western Wall otherwise known as the Wailing Wall. And immediately, Israeli soldiers camp up to the Temple Mount and attempted to put handcuffs on a three-year-old little boy — for bouncing a rubber ball.

I have been there when a teenager, I think he was 15, was walking down the street and asked a military vehicle, the Israeli government, a question and because that question was that was not one of the liking of those soldiers, he began to run as they threatened him and they shot him in the back four times he fell on the ground and they shot him another six. Violence on both sides is deplorable, but those who have greater power and technology have a greater responsibility for re-constraint (sic).

In her testimony, Harris said that a boy was shot in the back 10 times for asking Israeli soldiers a question that they didn’t like.

This is absurd. The first that the world heard of this atrocity was from Harris herself speaking at a church meeting a few years after the alleged incident happened. That doesn’t make any sense. Since when would Palestinian leaders fail to broadcast such an atrocity to the world?

In its July 26, 2018 statement, The Simon Wiesenthal Center highlighted the absurdity of the bouncing-ball story: “There is a high stone wall on top of the Temple Mount that blocks balls and people from going over the side.”

Moreover, as anyone who has been on the Temple Mount can attest, Israeli soldiers do not need to “come up” to the Temple Mount as Harris stated, because they are already stationed on the site.

She Said She Was There, But Then Says Somebody Told Her

The way that she told the stories, Harris made it sound like she was an eyewitness to the events, but the statement issued today reveals that she was not.

This leaves us with some other questions. Who told Bishop Harris these stories? Who were the victims? When did these “events” take place? Does Bishop Harris not know about the problem of Pallywood?

Unless Bishop Harris can provide confirmatory details (such as the names of the victims, the date, time and location of the atrocities and her sources) for these stories, she must retract and apologize to her fellow bishops, and to the general public for engaging in ugly propagandizing against the Jewish state in a church setting.

Broadcasting unsubstantiated atrocity stories is a hugely irresponsible thing for an Episcopal Bishop to do.

This statement is not enough. A retraction and apology is in order.