One year after its expansion into the international news arena, Epa, or European Pressphoto Agency, has delivered a blow to the credibility of its newly added services with the following caption: 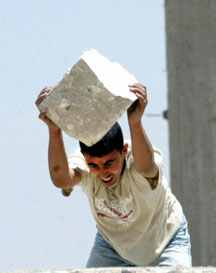 Palestinian boys hurl stones at Israeli troops after they raid Balata refugee camp while Palestinians protest against the Israeli military operations in Rafah at Balata camp near the west bank [sic] city of Nablus Wednesday 19 May 2004, at least more than 25 Palestinians were killed and 30 wounded in an Israeli helicopter strike at a demonstration in the southern Gaza Strip town of Rafah to protest a massive army operation there, medical sources and witnesses said. EPA/Alaa Badarneh

This large block of stone, obviously capable of killing a person when dropped from above, is merely a “stone”?

Epa’s Web site boasts that “Since its birth in 1985 epa has consolidated its position as No. 1 in Europe with highly-praised photo news coverage. . . .” One can only hope that the May 19 caption is atypical of epa’s “highly-praised” coverage. If not, hopefully American news consumers are more discriminating than their European counterparts. An intelligent reader will allow epa’s images to speak for themselves and will not be misled by grossly distorted captions.