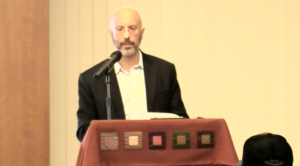 Elisha Wiesel giving a lecture in his father’s honor at Boston University on Nov. 8, 2021. (Livestream screenshot)

Repeating defamatory falsehoods about Israel is not acceptable.

That was one of several important messages offered at the Elie Wiesel Memorial Lecture  last night (Nov. 8, 2021) at Boston University, the night before the 83rd anniversary of Kristallnacht.

The lecture, offered by writer and activist Elisha Wiesel, took place at a crucial moment in the history of the Boston University’s Jewish Study Center named after Elisha’s father, a Holocaust survivor and Nobel Laureate. The previous memorial lecture was given by Rev. Dr. William Barber, II, a pastor from North Carolina, who advocates on behalf of poor and “low-wealth” people in the United States.

Prior to giving his lecture, Barber had offered up some ugly falsehoods about the Jewish state at a 2018 event organized by the anti-Zionist organization US Campaign for Palestinian Rights.

These statements raised serious questions about Boston University’s willingness to extend an invitation to Barber to give a lecture in honor of Elie Wiesel. Wiesel promoted human rights for all, but also worked assiduously to counter anti-Jewish and anti-Israel misinformation, and here was Barber giving a lecture in his honor.

Fortunately, when Barber spoke at BU on Oct. 28, 2021, he did not traffic in the misinformation he had broadcast previously. While it would have been good for Rev. Dr. Barber to repudiate his previous falsehoods, the fact that he did not repeat them is, in the current climate, a good thing.

Maybe at some point in the future, Rev. Dr. Barber will correct the record.

Nevertheless, both Professor Michael Zank, director of the Jewish Studies Center, and Elisha Wiesel, last night’s speaker, did the work of countering the misinformation broadcast by Rev. Dr. Barber — and so many others — to the detriment of Jewish safety and the health of American civil society over the past few decades.

Some members of the Jewish community felt hurt by comments one of our honored speakers in this series made, not here at BU but elsewhere on a prior occasion, on a subject the majority of the Jewish community, including myself, care very deeply about, and that is the state of Israel and the Zionist idea on which it is founded. To associate Israel and Zionism with racism and colonialism is a travesty, ignoring the right of the Jewish people to have their own state. Many of us see Israel as the only meaningful answer to the traumas of the Holocaust.

Without mentioning Barber by name, Zank repudiated his false accusations in a very direct manner, declaring, “We reject the accusation that Israel Defense Forces carelessly target Palestinian children.” He continued:

It is a baseless charge that plays with anti-Jewish stereotypes, stereotypes that were preached from Christian pulpits for centuries and created the Christian culture of hatred and disdain for Jews that led to the genocide whose traumatic legacy we carry.

After recounting the lessons offered by the life of his father, Elisha Wiesel addressed the content of Barber’s allegations made prior to his lecture. Without naming Barber, he said that it’s necessary to respond to falsehoods directed at Israel. Citing his father’s 1975 text, A Jew Today, written in response to the defamatory “Zionism is Racism” resolution passed by the UN, he said that the enemies of the Jewish people pitted them against the world and when that failed, “they tried to pit us against each other.” He continued:

You have a world beyond the campus. You have the Middle East and North African editor for Twitter, a curator for this content, who has a history of praising Farrakhan.

The new Jerusalem correspondent for the New York Times has been found to have said that Hamas and Hezbollah are not terror organizations.

These are people with incredible responsibility for curating and reporting content.

Sadly we know that wasn’t true.

Arab armies repeatedly tried to push Israel into the sea.

When we’re told that Zionists have a share of the blame for the difficulties that African Americans face in voting, I don’t see it that way. And I don’t think my mother who marched for civil rights sees it that way.

And obviously, when we talk about Israel targeting children [again a response to Barber’s false statements] is when we need to be most careful of all, given the long history of our church and our enemies saying we do terrible things we have never done.

Wiesel warned against responding too harshly to people who broadcast lies about Israel if they are not repeat and intentional offenders, because maybe they made an innocent mistake. Attacking those who make innocent mistakes “may push people who don’t understand the situation to really come out against us.”

Wiesel also declared that he’s very optimistic about the Elie Wiesel Center for Jewish Studies at Boston University at a time “when so many Jewish studies centers in the university spectrum of the United States have sadly become more and more platforms for Israel and Jewish memory to be attacked.”

“I know it’s happening elsewhere,” Wiesel said. “My most sincere hope is that this center will play a leadership role in combating that.”

“Tomorrow is Kristallnacht,” Wiesel said. “Kristallnacht continues. I want you here to recognize that those breaking glass today to attack Jews 83 years since the original Kristallnacht — they act on lies offered by Hamas as often as by David Duke or [Louis Farrakhan].” He continued:

My father believed in the power of students, especially at this university. You all have choices to make. I know my father’s legacy and I am doing my best to live it.

I know you will too.