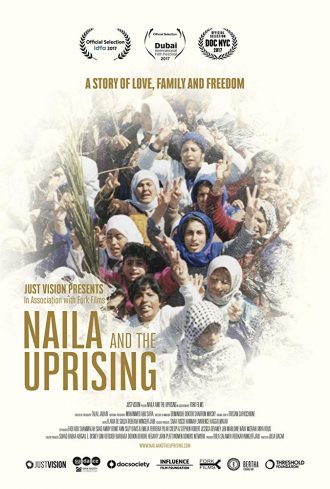 PBS recently broadcast yet another one-sided documentary highlighting Palestinian grievances against Israel. Called Naila and the Uprising,  it aired on March 26, 2019 as part of a multi-film series called Women, War & Peace. As CAMERA earlier demonstrated, documentaries broadcast on PBS about the Palestinian-Israeli conflict seem to hew to a specific pattern: They depict Palestinians as heroes in a distorted and partisan narrative that ignores the conflict’s underlying fundamentals to blame the Jewish state, military, leaders and society for the region’s ills.

This latest film is an exemplar of how PBS serves as a platform for anti-Israel propaganda.

Naila and the Uprising was produced by “Just Vision,” a politicized NGO that poses as a “non-partisan” group and couches its mission in terms of peace and understanding. Its declared goal is “to contribute to fostering peace and an end to the occupation by rendering Palestinian and Israeli grassroots leaders more visible, valued and influential in their efforts.” But this is belied by the group’s partisan statements that condemn or demonize Israel in hostile terms. According to the NGO’s website:

We assert that the continuing occupation and Israeli settlement growth are illegal, immoral, and pose a major obstacle to any lasting solution, and recognize the rights of refugees in accordance with international law.

Similarly, Just Peace Executive Director Suhad Babaa contributed a message of solidarity to the Palestinians in the name of Just Peace, accusing Israel of “brutality,” “repression,” and “violations of international law,” while  suggesting that the anti-Semitic BDS campaign is “a classical, peaceful form of civil and economic resistance.”

While the organization claims to include Israelis, it partners only with the radical few who reflexively denounce Israel while refusing to acknowledge history, context and factual evidence. They represent a fringe element in Israeli society. As NGO-Monitor points out:

Just Vision partnered with +972 Magazine and Active Stills to create Local Call, the Hebrew version of +972 Magazine, a ‘blog-based magazine’ that “disrupts the Israeli mainstream conversation” and promotes a marginal agenda from the fringes of Israeli discourse, thus presenting a distorted sense of the debate in Israel.

Among the anti-Israel groups endorsed on Just Vision’s website is the anti-Semitic Boycott, Divestment and Sanctions (BDS) campaign.

Just Vision’s film team includes Brazilian filmmaker Julia Baccha, who is not only the group’s creative director but a “media strategist” adept at camouflaging partisan attacks against Israel as a promotion of peace and human rights; Executive Director Suhad Babaa, who is also listed as a “media strategist”and a “human rights advocate”; Rula Salameh, a Palestinian activist, journalist and Just Vision’s Education and Outreach Director; and Rebekah Wingert-Jabi, who produced films for Arab media outlets and taught film at Palestinian colleges before teaming up with Just Vision to produce some of their films. Among Just Vision’s previous film are Encounter Point, Budrus and My Neighborhood,  all of which highlight the Palestinian “struggle to end Israeli military occupation and create an independent state.”Ignored and concealed in all of these documentaries is the fact that Palestinians are opposed to a Jewish state in any boundaries and have repeatedly rejected offers of statehood as its leaders categorically deny the right of Israel to exist as a Jewish state in a two-state solution.

Naila and the Uprising

Given the clear agenda of the filmmakers, it is not surprising that their latest documentary is a cunning piece of propaganda. It embraces the trendy theme of intersectionality to retell the story of the first Palestinian intifada or uprising.

The film recounts the role of Naila Ayesh and other Palestinian women in their intersectional struggle for gender equality and against Israel’s military occupation. Although the women are eventually sidelined by the leaders of their patriarchal society, the film tells a compelling story about their initial empowerment and the success of their supposedly peaceful uprising against a formidable enemy.

The filmmakers reduce complex events into a simplistic morality tale where Palestinian heroes deprived of their freedoms triumph over their villainous Israeli oppressors. The use of childlike cartoons to depict Naila’s actions, Palestinian suffering, and Israeli brutality contribute to the semblance of guilelessness and sincerity on the part of the Palestinian storytellers.

The real history is distorted through the concealment of essential facts and the presentation of a partisan version of events within a false framework.

Protagonist Naila Ayesh establishes the starting point of the story as the June 1967 war. “Army jeeps were on every corner,” Naila recounts. “It was the beginning of the war and of Israeli occupation.” A scene follows of Israeli soldiers near an army jeep, accompanied by the following screen text:

The implication that Israel invaded the West Bank and Jerusalem to occupy Palestinian territory and subjugate its people becomes the framework for the film’s story. It is false.

Viewers are not told that the territory was neither historically Palestinian nor under independent Palestinian control, that it had been illegally annexed by Jordan, and that its historic Jewish population was forced out during the 1948 war. Nor are viewers informed that, in 1967, Israel was faced with a war of self-defense when Jordan, then the official representative of the Palestinians, attacked despite the Israeli prime minister’s pleas to Jordan not to enter into hostilities with Israel. Israel did not react to initial Jordanian attacks, responding only after its leader, King Hussein, rebuffed Israel’s peace messages by ordering intensified assaults on Israel. This was acknowledged by the Jordanian leader in his memoir,  Hussein of Jordan: My ‘War’ with Israel.  Had Jordan heeded Israel’s pleas for peace, there would have been no fighting on the Jordanian fronts and the disputed territory would not have come under Israeli control.

The film does not explain that the reason for Israel’s military control, by definition a temporary situation, is that the Arab states, including Jordan, joined together following the 1967 war in calling for a continued state of belligerency with Israel. The resulting Khartoum Resolution became famous for what is known as its “three no’s”– no peace with Israel, no recognition of Israel, no negotiations with Israel. A peace agreement ensuring secure Israeli borders would have ended Israel’s military occupation of the territories.

The documentary suggests Israel’s military occupation is racist and brutal: An old TV news clip claims that Arabs are “second-class citizens” and bemoans what it misleadingly contends are two sets of laws for Jews and Arabs. It does not point out that the Arabs living in the West Bank (and at the time Gaza) were residents of hostile territory as opposed to citizens of Israel, and were therefore subject to Israel’s military justice system rather than Israeli civilian laws. By contrast, Arab citizens of Israel and Arab permanent residents of eastern Jerusalem which Israel annexed, were subject to the same Israeli civilian law as Jews.

Contrary to what the film claims, Israel’s military occupation was initially considered a relatively benign one until Arab terrorism prompted the implementation of security measures to protect Israeli soldiers and citizens.

Indeed, Arab violence and terrorism are not addressed at all in the film. The only oblique allusion to it is as a noble deed – “resisting the occupation.” In this way, the film distorts Israel’s security measures to present them as a cruel means to suppress innocent Arabs. Thus, viewers are told that “those in the occupied territories faced checkpoints, curfews, and home demolitions,” without any reason or context and as if this had been a feature of the occupation since 1967.

In fact, checkpoints – the vast majority of them temporary or “flying” – were established in the wake of terrorist attacks and suicide bombing perpetrated by Palestinians in areas where the threat from terrorism is greatest. Curfews are imposed as needed as short-term security measure for the protection of civilians in areas of combat. Demolitions of the homes of terrorists are carried out as a deterrent to further terrorism.

A further example of the film’s deceptive messaging is its presentation of the first intifada as an entirely non-violent uprising. While some protesters confined themselves to civil disobedience, Palestinian rioters targeted Israeli soldiers and civilians with stones and firebombs from the start. These were not just symbolic weapons of the weak and oppressed: Sixty Israeli soldiers and one hundred civilians were killed during the first intifada and hundreds more were wounded. Rachel Weiss, a 26-year-old Israeli mother, pregnant at the time, was one such victim as she and her three young children lost their lives on a civilian, inter-city bus that was firebombed by Palestinian protesters. A fellow passenger who tried to pull her from the burning wreckage was killed as well. In another incident, a Palestinian ‘protester’ forced a civilian bus off the Tel Aviv-Jerusalem highway into a ravine, killing the 16 civilians on board, including three North Americans. The film, however, conceals all this, as it does all deadly violence by Palestinians against Israelis.

It similarly conceals the internal violence, fueled by intra-Palestinian rivalries, that became a feature of the uprising. Palestinians were stabbed, beaten and shot by fellow Palestinians who accused their victims of being “collaborators.” With nearly 1,000 Palestinians killed in fratricidal attacks during this time, the first intifada was dubbed an “intrafada.”

What about the film’s depiction of Naila as a courageous young crusader who smuggled communiqués about non-violent resistance to Palestinians while toting an infant on her back? How innocent and peaceful were those communiqués?

… I went to my newspaper’s archives and found part of this communiqué and it is essentially a song of praise for the “heroes of the stones and the molotovs”….

But molotovs, stones, fratricidal killings, murders of pregnant women and children have no place in a piece that is devoted to demonizing Israel and glorifying its opponents. It is to be expected from an organization that makes no secret about its agenda.

The question is what is PBS’ agenda? And what is the agenda of those who fund this type of programming?

A partial list of funders for Naila and the Uprising follows.