An April 20th article in the Financial Times (Netanyahu strikes deal with Gantz to head unity government) included the following:

Mr Netanyahu’s trial was delayed to late May after he shut down the courts in response to the coronavirus outbreak.

The courts were not “shut down”. Their activity was merely curtailed.

In a March 21 press release, Supreme Court Chief Justice Esther Hayut clarified that the courts continue to function throughout the country, providing essential services to the public, and added:

“The reduced activity of the courts due to the Coronavirus crisis until now – and everything necessary will be done in the future as well – to ensure that everything first and foremost will be carried out according to her opinions and decisions.” (Translation by CAMERA)

Indeed, after that date the Supreme Court convened and rendered decisions against the government over the actions of then Knesset Speaker Yuli Edelstein. Further, it wasn’t Netanyahu, but the Justice Minister who made the decision – in consultation with the attorney general.

As our colleagues have reported, other media outlets made this mistake.

Following communication with FT editors, our complaint was upheld, and the sentence revised:

Mr Netanyahu’s trial was delayed to late May after the government restricted court activities to emergency proceedings in response to the coronavirus outbreak.

The following editor’s note was added:

In a separate matter:

We contacted editors at Western Mail (Wales) over an April 22 print article which stated as fact the unsubstantiated Syrian state media claims that they shot down Israeli missiles earlier in the week.  Editors quickly upheld our complaint, and printed a correction in today’s paper: 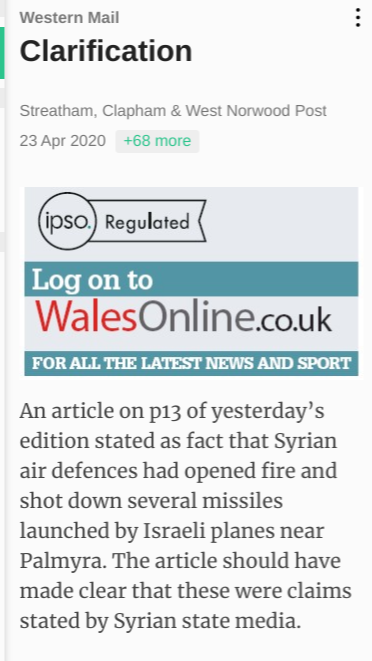