In a February 21 piece at Foreign Policy, author Sophia Goodfriend paints Israel’s use of surveillance technology as part of a money-making, rights-abusing scheme at the expense of Palestinians. As she writes:

“Palestinians subjected to Israeli military rule lack basic privacy rights; often, they are entirely exposed to surveillance by Israeli soldiers. This allows companies working with the Israeli military to prototype and refine new technologies on Palestinian civilians in places like Hebron before they are exported abroad…”

There’s something particularly ugly about the accusation that the Jewish State tests technology on Palestinians to make a profit. Part of it is that the suggestion flirts with multiple antisemitic tropes: that Jews are only interested in money, or that the Jews are always engaging in grand conspiracies to manipulate the goyim for their own insidious designs.

But the other side of the coin to this libel is that it denies a basic human instinct to the Jewish people, namely that for security, and replaces it with cynical, insidious explanations. It requires ignoring the fact that since even before the state of Israel came into being, the Jews in the land of Israel have faced constant attacks and existential threats.

That Goodfriend, a former member of Students for Justice in Palestine, would diminish and demean the real security threats is unsurprising, given that she has a history of comments like mocking her grandparents who “blamed anti-Semitic terrorists, who fire ramshackle rockets at the empty deserts” in reference to the thousands of rockets that have been launched by genocidal terror organizations like Hamas at Israeli population centers, killing Jews and Arabs alike.

Hebron, a focus of much of the article, is a case in point. It is one of the holiest cities in Jewish history. It is also a place in which the Jewish people were massacred in 1929, with dozens of Jews – including men, women, and children – butchered by Arab mobs. After another round of Arab riots and killings in 1936, Hebron – where Jews had lived since time immemorial – was emptied of its Jewish population. They would not be able to return to this ancient Jewish city until three decades later. 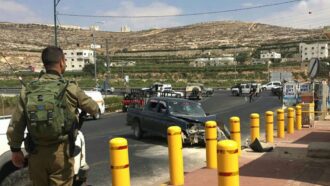 The scene of a ramming attack near Hebron.

Since then, there have been many acts of violence and terror. Countless shooting, bombing, and stabbing attacks against Israelis have taken place there. It’s the location of the most notorious act of terrorism by an Israeli Jew, when in 1994 Baruch Goldstein massacred worshippers in the Ibrahimi Mosque at the Cave of the Patriarchs. The security threat remains in Hebron today, too. Just a few months ago, in December 2021, over 100 members of the terrorist organization Hamas were arrested in raids throughout the city.

It’s also the location of serious tensions between rival Palestinian clans and political groups. The Palestinian Authority’s security control of the city has been seriously challenged, not by Israel, but by these non-governmental groups, leading to repeated rounds of intra-Palestinian violence and severe criticism of the PA by Palestinians.

In other words, Hebron is a city of serious and complex security threats. But instead of acknowledging and addressing this, Goodfriend sweeps this reality under the rug so as not to undermine her insinuation that Israel’s security measures have true designs other than, well, security.

The author even takes this narrative to the point of absurdity. Goodfriend acknowledges Israel’s surveillance technologies reduce the need for friction and interactions between Israeli soldiers and Palestinians. But instead of viewing this as a good thing by reducing the likelihood of violence, the author instead claims that “these technologies’ convenience distracts from their brutal effects.”

What are some of the “brutal effects” of these technologies? That residents feel they are “constantly being monitored.” But what the author fails to acknowledge is that were surveillance technologies to disappear, the need for surveillance would not also automatically disappear. Instead of boots and eyes on the ground and all the inherent risks for both sides associated with that, surveillance technology enables security monitoring with reduced daily effects on the residents of Hebron.

This leads to the article’s claim that these surveillance technologies deny Palestinians the “right to privacy.” Goodfriend cites an Israeli attorney to proclaim that “[i]nternational law enshrines privacy as a basic human right,” before lamenting that “the strict data privacy protections in place for Israeli citizens do not extend to Palestinian civilians living under Israeli military rule.”

As expert on the law of occupation Eyal Benvenisti explains: “In the interplay between the conflicting interests, the law of occupation concedes that certain civil and political rights will from time to time be subjected to other concerns.” Elaborating further, he writes: “Realistically, one cannot expect occupants to endanger the security of their forces for the purpose of allowing local residents to enjoy liberties and rights that are usually granted in democracies in peacetime.”

“Occupation” and armed conflict are not free licenses to restrict rights, but they inevitably affect the calculus when it comes to determining the balance between competing considerations such as privacy and security. In Israel, the security threats are very real.

So in other words, the article is telling only half the story of international law and its application to the situation in Israel. While international law does indeed enshrine the right to privacy, it also allows for a balancing act in situations of conflict. By completely ignoring that latter and important consideration, Foreign Policy is giving its readership a slanted, partisan narrative as opposed to an informative discussion on an important dilemma in international law.

It is also worth noting that the use of surveillance technologies, including facial-recognition technology, is found in democracies outside of the context of a conflict, such as in the United Kingdom and the United States. While the use of such technology might be controversial and legitimately criticized, few if any would accuse such countries of using them to test the technologies and then sell them abroad, notwithstanding that the justification for such surveillance outside of a conflict is less convincing.

Instead, this conspiratorial narrative is reserved only for one nation, the Jewish state.