Recently, numerous television reports mentioned the name of the group known as “Black Hebrew Israelites” (a heretofore obscure group) without discussing the group’s beliefs or aims. The reports ensued from the brouhaha resulting from an online posting of a video clip showing BHIs confronting a group of Kentucky high school students and native American activists during the Jan. 18, 2019 “March for Life” rally in Washington, D.C. on the National Mall.

Fox News Channel’s Watters’ World program on January 26 included a segment about the BHIs in which Jesse Watters interviewed Kahtriel Ben Yosef, a BHI spokesman. The segment contained material misleading viewers about the Jewish state of Israel. Watters’ World is among the FNC programs with the highest television audience ratings.

… they [the Palestinians] think it’s theirs [the land of Israel].

During an otherwise straightforward interchange with Yosef, Watters managed to elevate baseless claims to the land of Israel. Yosef stated that the land (Israel) “belongs to us [the BHIs]” to which Watters responded, “You want the land in Israel to be given back to you. You believe it’s rightfully yours. You would probably have to fight with the Palestinians on that because they think it’s theirs.”

Here, Watters failed to demand evidence for the BHI claim (apparently none exists). Instead, he conferred respectability upon the baseless Palestinian claim to the land. Meanwhile, he somehow omitted mention of the only legitimate claimant to the land, today’s Israelis (more below). 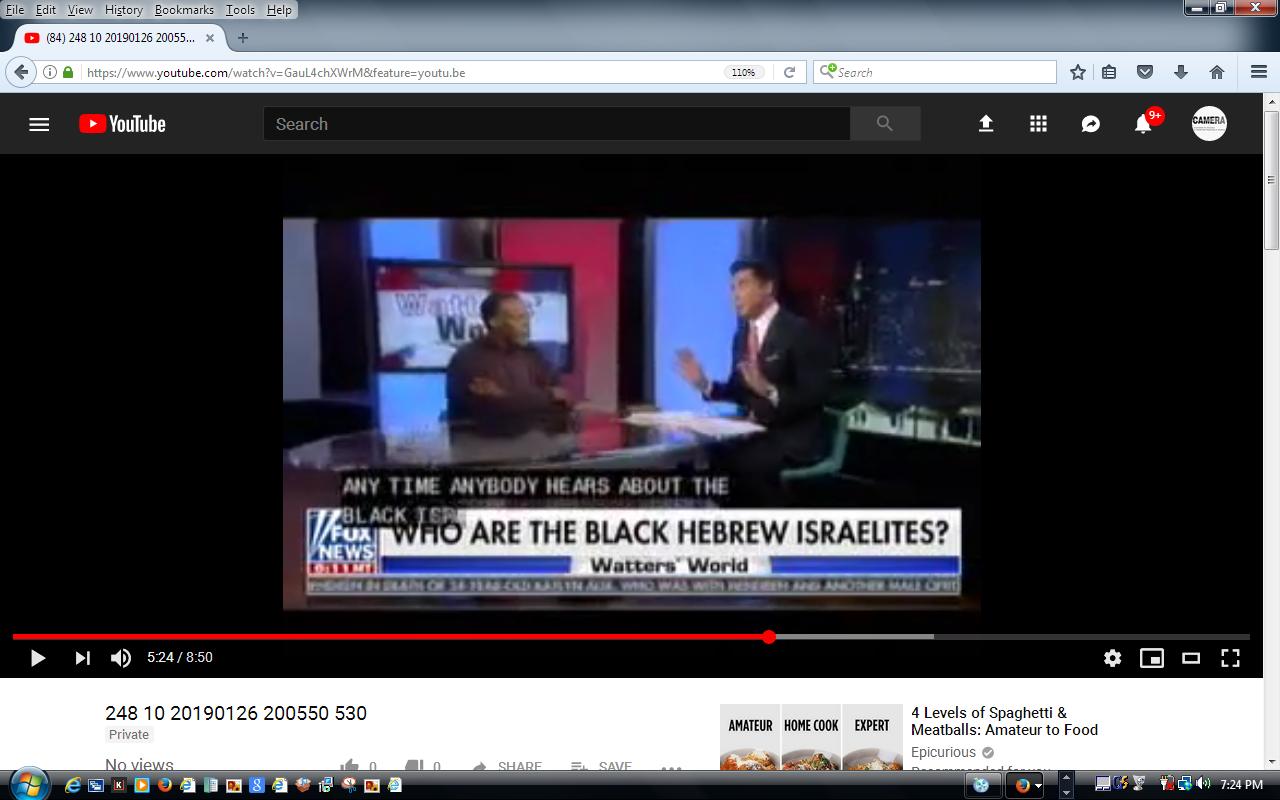 The sequence dealing with Israel occurred at two minutes into the BHI segment:

Watters: Is there a problem right now with the Black Israelites? Are they angry at something specific? What’s the beef?
Yosef: From my perspective we have been in captivity for 400 years. We have been denied our heritage and our land. What belongs to us as a people? We have been here for 400 years. We have had miseducation in regards to what belongs to us nationally and ethnically as [indiscernible] to this country.

Watters: You want the land in Israel to be given back to you. You believe it’s rightfully yours. You would probably have to fight with the Palestinians on that because they think it’s theirs.
Yosef: A lot of people think it’s theirs. Prophecy says the children of Israel will return to their land from the scattered places they have been scattered.
Watters: Okay.

Watters: Your group has been called a hate group.
Yosef: No. The children of Israel were brought over here in slave ships. The process of awakening to know who we are, what our roots are, has taken on many factions. Basically they have been formulated in religious concepts. Ethnically and religiously we are descendants by birth of the nation of Israel.

Watters’ total response was limited to “Okay,” to Yosef’s reference to Bible prophecy, “Prophecy says the children of Israel [meaning the BHIs] will return to their land from the scattered places they have been scattered.” Watters’ response was inadequate and fell short of responsible journalism. The several scattering/re-gathering prophecies in the Bible from the ancient Israelis refer to the Jewish children of Israel.

How should Watters have responded to the claims?

It would have sufficed to have responded with something like this: “But you ignore the overwhelming evidence on the side of the Israeli Jews. It’s international law and historical and DNA biological evidence. As to the Bible prophecy you mention, it fits today’s Jewish people of Israel.”

About the false Palestinian claim to the land

There has never been a state of Palestine, nor an Arab or Muslim entity by that name. The League of Nations’/United Nations’ Palestine Mandate, administered by Great Britain from 1922 to 1948, was created to facilitate restoration of the Jewish national home and included the Gaza Strip. Arabs rejected while Jews accepted the 1947 U.N. partition plan calling for a Jewish and a new Arab state in Mandatory Palestine. Israel and Jordan are successor states to the original mandatory lands, the Gaza Strip and West Bank the unallocated remaining 5.5 percent, with the Strip currently controlled by Hamas, separate from the Palestinian Authority administering the West Bank. Nearly all area Arabs considered themselves to be “southern Syrians” until the 1960s when Arab terrorist leader Yasser Arafat and his disciples adopted the notion of Palestinian Arab nationhood as a rallying anti-Israel tactic.

As CAMERA’s Dr. Alex Safian points out: “… the famous Arab historian George Antonius … in his seminal book The Arab Awakening: The Story of the Arab National Movement (1939), wrote: ‘… the term Syria will be used to denote the whole of the country of that name, which is now split up into the mandated territories of (French) Syria and the Lebanon, and (British) Palestine and Transjordan.’ That is, according to Antonius, the British Palestine of 1939 was formerly part of a larger Syria, and that therefore the Arabs of British Palestine were actually Syrians, or to be more exact geographically, southern Syrians …”

Additionally, the region today known as the “West Bank” (claimed by the Palestinians) was part of ancient Israel. It was known for three millennia generally as Judea and Samaria (transliterated from the Hebrew, Yehuda and Shomron). After Israel’s War of Independence, Jordan renamed the area as “West Bank” (of the Jordan River). Author and scholar Lee Bender points out that, “The United Nations itself, in General Assembly Resolution 181 (1947), referred to the region as Judea and Samaria, as do all maps published before 1948… [Furthermore,] Israel’s second president Yitzhak Ben-Zvi was a scholar who wrote the book, The Peoples of Our Land in 1932. In it, he states that west of the Jordan River, 277 villages and sites—almost two-thirds of all sites—had names that were similar to or the same as Jewish villages in these locations during Second Temple times [thousands of years ago].”

Examples of West Bank Arab towns with names derived from the Hebrew Bible are: Arab Jenin was Ein Ganim, Silwan was Shiloach, Selum was Shilo, Tequa was Tekoa (the Prophet Amos’s hometown), Anata was Anatot (the Prophet Jeremiah’s hometown), Batir was Beitar, Beitin was Beit El, Jaba was Geva, Mukhmas was Michmash (King Saul’s fortress) and El-Jib was Giv’on (where the sun stood still). And of course there’s the famous biblical city of Bethlehem, the English name being a transliteration from the Hebrew name, Beit Lechem (meaning “house of bread”).

Furthermore, the findings of scholars (Joan Peters in From Time Immemorial, among others) have shown that most of those who today identify as Palestinians descend from relatively recent migrations from surrounding territories. In fact, it’s likely that the Arab population began to blossom only well after the beginning of substantial Jewish immigration in the 19th century.

Included in the Palestinian narrative is the strange claim, meant to establish their prior rights to the land, that today’s Palestinian Arabs descended from the ancient Philistines or Canaanites who inhabited the area. This is historical fantasy since both the non-Arab Philistines and non-Arab Canaanites were destroyed – disappearing from history millennia ago, with no evidence of survivors.

The legitimate claim to the land

The legitimacy of today’s state of Israel is backed up by international law and unique historical, archeological and DNA biological evidence. The law aspect is summarized as: The Balfour Declaration of 1917; the League of Nations Mandate, which incorporated the Balfour Declaration; the United Nations partition resolution of 1947; Israel’s admission to the UN in 1949; the recognition of Israel by most other states.

There is a continuous Jewish diaspora history from the Roman expulsions to the rebirth of Israel as a Jewish state. Modern DNA testing strongly indicates both Jewish genealogical continuity and Middle Eastern origins of the vast majority of today’s Jews including the current Israeli Jewish population. Such DNA evidence has been provided in the findings of geneticist Doron Behar and colleagues. Additional information on the matter is provided in CAMERA reports discussing Middle East genetics and Cohanim DNA.

As an unprecedented indicator of genealogical continuity, today’s Israeli Jews speak the same national language, biblical Hebrew, spoken by their ancestors – the Jews of ancient Israel.

Any credence given to false claims (such as those of the BHIs or the Palestinians) to the land of Israel, contributes to the delegitimizing of the Jewish state which, in addition to the injustice of it, could contribute to depriving America of its most important ally in the Middle East. Israel is a unique place for democracy, liberty and technological innovation in the region.

FNC’s leadership should be concerned about Watters’ misleading interchange with the BHI spokesman concerning Israel.