This past November, the internet travel company Airbnb buckled after two years of pressure from Human Rights Watch and other anti-Israel NGOs, and announced that it would remove listings of Jewish-owned properties in the West Bank from its site. Not wanting to be outdone, Amnesty International has now followed that up with a campaign not only targeting Booking.com, Expedia, and TripAdvisor, but also asking Airbnb to add Jewish-owned properties in eastern Jerusalem to its blacklist. The central part of the campaign is Amnesty’s 96-page report titled, “Destination: Occupation.”

The report denies Jewish history, ignores both terrorism and Arab states’ attacks on Israel, implicitly legitimizes Jordan’s 1948 ethnic cleansing of eastern Jerusalem and the West Bank, and, in its conclusion, explicitly calls for further ethnic cleansing of Jews from the West Bank and eastern Jerusalem. Amnesty not only proposes, as the campaign against Airbnb did, that Jews should not live in the West Bank, it goes even farther and attempts to limit Jews’ ability to even visit the West Bank and eastern Jerusalem. While Amnesty has a history of singling out Israel for disproportionate condemnation and relying on demonizing rhetoric rather than facts, this report is particularly malevolent because it targets private businesses and attempts to coerce them into signing on to Amnesty’s bigotry. 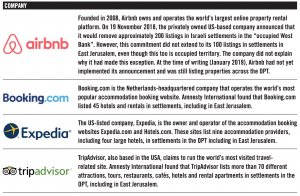 The gist of Amnesty’s complaint is that Booking.com, Expedia, TripAdvisor, and Airbnb “list numerous hotels, B&Bs, attractions or tours in Israeli settlements in the Occupied Palestinian Territories (OPT). They are doing so despite knowing that Israel’s settlements are illegal under international law, and a war crime.”

As CAMERA has covered in extensive detail, there are strong arguments made by legal scholars that the settlements are, in fact, legal. Eugene Rostow, the former U.S. Under Secretary of State who helped write Security Council Resolution 242, has said that, “Israel has an unassailable legal right to establish settlements in the West Bank.” As international law expert Eugene Kontorovich has found, in eight other conflict situations, similar settlement activity was not considered to be a violation of international law. Nor does the U.S. consider the settlements illegal. Moreover, the land in Jerusalem and in Area C of the West Bank that Amnesty calls “Occupied Palestinian Territories” has never in history been under Palestinian sovereignty.

Although in declaring the settlements illegal and the territory “Palestinian,” Amnesty is ostensibly adopting the U.N. position, its adoption of that body’s findings is selective. In footnote 18, Amnesty refers to the “illegal military blockade” of Gaza, but the U.N. found that blockade to be legal. Amnesty also seems to have anointed itself the adjudicator of both war crimes allegations and private property disputes, but the group’s history of attacking Israel and its hiring of biased staffers make it unsuitable for this role.

According to the Israel-based research institute NGO Monitor, Amnesty “disproportionately singles out Israel for condemnation, focusing solely on the conflict with the Palestinians, misrepresenting the complexity of the conflict, and ignoring more severe human rights violations in the region.” NGO Monitor has also pointed out that Amnesty has a track record of hiring staffers who were already predisposed to the Palestinian point of view prior to joining the organization. For example, Saleh Hijazi, who runs the group’s Jerusalem office, “previously worked as a Public Relations officer for the Palestinian Authority’s Office of the Ministry of Planning in Ramallah and in 2007 he was listed as contact for the NGO ‘Another Voice’ – under the group’s signature ‘Resist! Boycott! We Are Intifada!’” NGO Monitor also reports that Hijazi once used a photo of PFLP terrorist Leila Khaled as his Facebook profile photo.

The introductory page to Amnesty’s report blares in oversize font, “by listing properties and attractions in Israeli settlements, digital tourism companies are profiting from war crimes.” To Amnesty, Jews visiting their ancestral homeland and holy sites are complicit in “war crimes” – and not just war crimes, but war crimes more deserving of sanction than Hamas’s use of its own citizens as human shields, or Hamas rocket attacks on civilians, or the Palestinian Authority’s pay-for-slay policy that effectively puts a bounty on the head of every Israeli citizen.

Responding to all of the biased and misleading claims made in the 96-page report is beyond the scope of this article. But the tendentiousness of Amnesty’s report can be seen in the first paragraph of its “Background” section:

There are some 3 million Palestinians and around 600,000 Israeli settlers living in the West Bank, an area which includes East Jerusalem. Israel captured the West Bank, as well as the Gaza Strip, during a war with its Arab neighbours in 1967. These areas are known today as the Occupied Palestinian Territories (OPT).

That the 1967 war was a defensive one from Israel’s perspective, and that Jordan illegally seized the areas in 1948 and subsequently ethnically cleansed them of their Jewish populations, are facts that don’t matter to Amnesty.

Indeed, terrorism and violence against Jews is all but invisible in this report. In Hebron, for example, Amnesty tells us that, “thousands of Israeli soldiers, border police and police are deployed to protect the settlers.” Protect them from what? Amnesty doesn’t say.

While other groups claim that Jews should not be permitted to live as a minority among Palestinians, as noted above, Amnesty goes even farther, targeting not only Jews who live in the West Bank, but the ability of Jews to travel there to see their own history. In its conclusion, Amnesty calls on states to “ban the provision or facilitation, including through digital platforms, of tourism services in settlements or by settlers in the OPT.” If Amnesty’s campaign against these tourism companies were successful, it would become much harder for Jews – and Christians – to visit their holy sites.

Indeed, in its case studies, Amnesty targets Jewish holy sites and historical areas, such as Shiloh, believed to be the location of the Tabernacle (Mishkan) prior to the building of the First Temple in Jerusalem. Amnesty faults TripAdvisor for listing the archeological site at Tel Shiloh as an attraction that people might want to visit, as well as for listing tour guides who take visitors there. “Through their listings,” Amnesty writes, “Airbnb, Booking.com and TripAdvisor have helped drive tourists to the area.”

Another example is Hebron, where Jews lived for centuries until they were ethnically cleansed after an Arab pogrom. Although Jews lived in Hebron long before there was a group of Arabs who referred to themselves as “Palestinians,” Amnesty absurdly refers to Hebron as a “Palestinian city,” and the Jewish settlements located in proximity to the Cave of the Patriarchs – where Abraham and Sarah are buried – as “illegal colonies.” Amnesty goes on to object to the fact that TripAdvisor lists a history museum in Kiryat Arba as one of its attractions.

Ironically, Amnesty claims to be standing up for the rights of indigenous people. Yet, like the others in the BDS movement, it attacks Jewish indigeneity, by trying to sever Jews from their history and their religious sites. It calls for the four travel companies not only to stop listing accommodations, but also to stop listing “activities and attractions” in the West Bank and even eastern Jerusalem. Amnesty even laments that the Western Wall is one of the top three most visited sites in the “OPT,” and that “in 2010, [Israel] allocated approximately US$110 million to protect and develop visitor infrastructure at historic sites ‘that reflect the national heritage of the Jewish people’ across Israel and the OPT.”

As noted above, Human Rights Watch and other NGOs led an aggressive campaign against Airbnb for two years. Amnesty is likely to also attempt to chip away at these travel companies with its anti-Semitic campaign until it gets its way.

Booking.com, Expedia, TripAdvisor, and Airbnb can all be contacted on Twitter. Let them know they should continue to support tourism to Israel, including to Jewish and Christian holy sites.