CAMERA’s Israel office yesterday prompted correction of a Haaretz Op-Ed by Alit Karp which falsely claimed that commemoration of the Nakba (“catastrophe”), the Palestinians’ term for Israel’s establishment, is outlawed in Israel. The Op-Ed (“Our pain, the pain of the Palestinians, online and in print, Jan. 30), had stated:

I am not comparing the Holocaust to the Nakba, neither in scope nor intent, but we should remember that in Israel it is forbidden by law to mark the Nakba, and Culture Minister Miri Regev is doing everything she can to deny state funds to institutions that want to do so. (Emphasis added.)

In fact, it is not forbidden to mark the Nakba in Israel, and the so-called Nakba law does not prohibit the marking of the Nakba. Indeed, as Haaretz reports, every year thousands of Arab citizens of Israel freely march to commemorate the Nakba. Last year’s march involved a dispute with the police over timing and nature, but not content. The police did not maintain that it was illegal to mark the Nakba, and the march went ahead with thousands of participants, with a slightly altered route to avoid an Israeli war memorial. 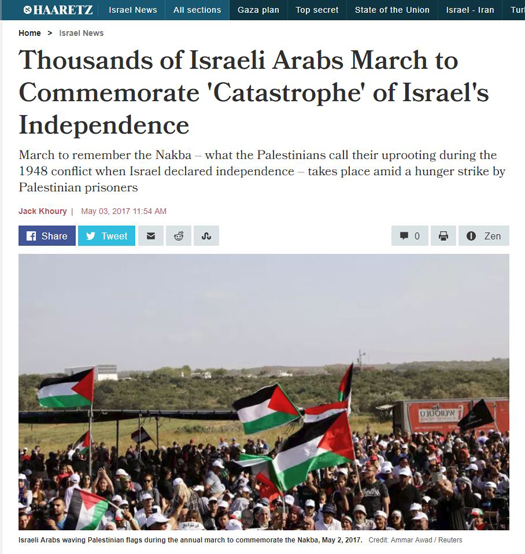 Moreover, if it were illegal to mark the Nakba, Haaretz itself is in violation of the law.
Rather, the law narrowly enables Israel’s Finance Minister to withhold government funding from state-funded bodies engaged in activities which reject the existence of the state of Israel as a Jewish state. The law does not affect private individuals or institutions or organizations which do not receive government funding. Nor does it prohibit bodies which do receive government funds from marking the Nakba. It merely gives the government the right to withhold funding if the state-funded body does mark the Nakba.
In 2012, Haaretz corrected a less extreme variation of the same error after a reporter mistakenly said that the law “fines bodies who openly reject Israel as a Jewish state.” The May 2012 correction stated: 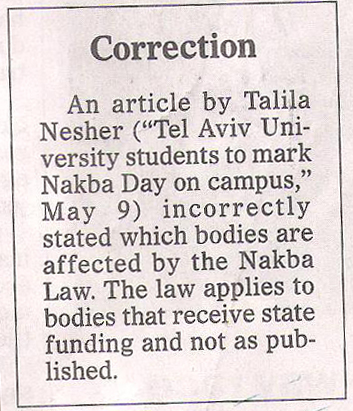 In response to communication from CAMERA, editors commendably amended the digital edition, removing the false reference to a prohibition against marking the Nakba. The revised text now accurately states:

I am not comparing the Holocaust to the Nakba, neither in scope nor intent. However, should remember that Israel, too, via the offices of Culture Minister Miri Regev, is doing everything in its power to deny funding for organizations that nonetheless wish to commemorate the Nakba.

(Regev’s efforts, whatever one may think of them, concern only state funding, and not other sources of funding.)
In addition, editors commendably appended the following note to the bottom of the article alerting readers to the change.

The correction has yet to appear in the print edition. In addition, as of this writing, a relic of the original error continues to appear in the Op-Ed’s last paragraph, which incorrectly states:

So long as Israel turns its back on the Palestinians’ pain and forbids them to make their voices heard legally, peace in our region will not be possible. (Emphasis added.)