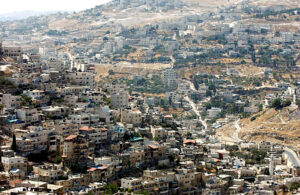 CAMERA’s Israel office today prompted correction of a Haaretz English edition article which wrongly stated that decades ago Palestinian families had purchased land where the Baten al-Hawa enclave of Silwan in Jerusalem is located. The digital article, which originally carried a misleading headline (“Court Okays Eviction of Palestinian Family Because Their Land Was Once Owned by Jews“) had reported:

The Baten al-Hawa enclave had once been owned by a Jewish property trust (hekdesh), housing Yemenite Jews who arrived in Jerusalem in the late 19th century. In 1938, British authorities ordered the residents out of the neighborhood because of the danger posed by the Arab revolt against the British mandate. Their homes were razed and years later, Palestinian families purchased the land and built Baten al-Hawa. (Emphasis added.) 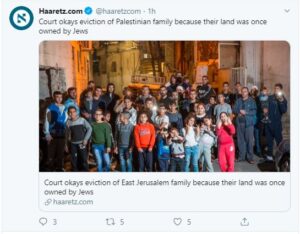 Palestinians never purchased Baten al-Hawa, and, indeed, in his Hebrew article, Nir Hasson did not write that they did.
Given the fact that the Palestinian residents never purchased the land where their houses sit, the headline which refers to “their land” is inaccurate and misleading.
In response to communication from CAMERA, editors promptly and forthrightly corrected, removing the false claim that “Palestinian families purchased the land.” The online text now accurately states: “Their homes were razed and years later, Palestinian families built Baten al-Hawa on the land.” In addition, the editors likewise commendably amended the headline, which no longer erroneously refers to “Their Land,” in reference to a Palestinian family facing eviction. The corrected headline now reads: “Court Okays Eviction of Palestinian Family Because Land Was Once Owned by Jews.”
In addition, editors commendably appended the following note to the bottom of the article, alerting readers to the change and demonstrating transparency:

A previous version of this report incorrectly stated that the land in question was purchased by Palestinians after the eviction of Jewish residents.

For additional instances in which misinformation is introduced only into Haaretz‘s English edition, and not the Hebrew edition, see “Haaretz, Lost in Translation.”