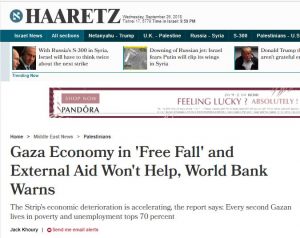 Likewise, Khoury’s Hebrew report rightly notes: “One of every two residents in the Gaza Strip lives in poverty and the unemployment rate among the young population rises to 70 percent, according to the report which the World Bank released today (Tuesday).”

Following CAMERA’s communication with Haaretz, editors commendably amended the online subheading and article. The current digital subheadline no longer contains the erroneous reference to 70 percent unemployment: “The Strip’s economic deterioration is accelerating, the report says: Every second Gazan lives in poverty.”
In addition, editors amended the online article to specify that the 70 percent unemployment figure refers to youth, not the general population. The amended text now accurately reports: “According to the report, unemployment among the young population in the Strip has topped 70 percent.”
Contrary to standard journalistic practice, editors did not append a note alerting readers to the correction.
For additional instances of “Haaretz, Lost in Translation,” in which misinformation about Israel or the Palestinians appears in the English edition which had not appeared in the parallel Hebrew article, please see here.
Donate Now