When Israelis teens Naftali Frankel (16), Gilad Shaar (16) and Eyal Yifrach (19) were kidnapped and murdered in June 2014 by Palestinian terrorists, the Israeli nation was riveted to news coverage of the 18-day agonizing search for the missing boys, clinging to hope and prayers for their safe return. In vengeance for their murders, Jewish terrorists then carried out another brutal murder which further rocked the country: the burning death of 16-year-old Mohammad Abu Khdeir.

Given the deep national trauma of these events, it’s hard to understand how Haaretz’s English has twice misreported basic facts about the Israeli victims’ identity. In 2019, the paper was compelled to correct after journalist Chemi Shalev misreported that the trio were soldiers. In fact, all of them were civilians (yeshiva students), not yet inducted into the army. The correction (at left) also rightly noted that the boys were murdered, while Shalev reported only the kidnapping, ignoring the murders.

Yesterday, Haaretz‘s English edition, in both print and online, mischaracterized the teens as “young men.” The article, by Hagar Shezaf, erred: “Tawafsheh said he couldn’t recall such a long string of violent incidents by settlers since 2014, when three young men from the Gush Etzion settlement bloc were kidnapped and murdered.“ 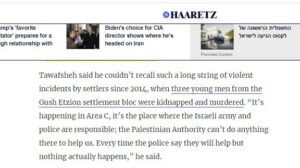 The hyperlink on the digital edition is to an article which correctly identifies the boys as “teens.” At 16, Frankel and Shaar were the same age as Ahuvia Sandak, who was killed in the recent police chase after Israeli youth who threw stones at Palestinians’ vehicles. Yesterday’s article correctly identified Sandak as a “teenager” in both the article and headline (“Palestinians, soldiers take brunt of settlers’ anger over teenager’s death in police chase last month)”

In addition, the Hebrew version of Hagar Shezaf’s article correctly identifies the boys as נערים, mean youth or adolescents, not “young men.”
In response to communication from CAMERA, Haaretz editors commendably amended the digital article so that it now correctly refers to “teens” instead of “young men.” (As of this writing, no note is appended to the article alerting readers to the change.)
For additional instances in which Haaretz‘s English edition introduces misinformation that had not appeared in the Hebrew, and in which the English paper downplays or omits Palestinian violence or other wrongdoing, see “Haaretz, Lost in Translation.”
Donate Now