An Op-Ed by Odeh Bisharat in Haaretz last week grossly fabricates the history of the founding of the State of Israel, and editors failed miserably to engage in any fact-checking, a responsibility which extends to factual statements in opinion pieces no less than news stories (“Palestinian, give up your life!” June 1, 2020)

Thus, Bisharat fabricates the following “fact,” referring to the “benevolence of Zionism that fell on [Palestinian Arabs] 100 years ago”: “The Palestinians constituted 90 percent of the population with ownership of most of the territory.”

Was most of the land in Palestine in fact owned by Palestinian Arabs?

Hardly. Though the falsehood is a staple of Palestinian propaganda, a look at the actual figures reveal just how far removed from the truth this claim this. A table in Appendix 1, Paragraph 15 of the Progress Report of the United Nations Conciliation Commission for Palestine (A/1985 20 November 1951) on the “total extent of abandoned Arab land” provides a detailed breakdown of the Arab-owned land left behind (at left). Out of Israel’s total of 20,250 square kilometers in 1948, 4,589 square kilometers, or 23 percent, was abandoned Arab property according to the British data (see chart at left). But the that figure is actually inflated, as the vast majority of Negev land was what was considered “mewat” land under the Ottoman laws, meaning that it was not suitable for agricultural use and was therefore state-owned and not privately held. Once the Negev desert land is deducted, the Arab-owned land amounted to 2,754 square kilometers, or just 14 percent of the total land area. Even once the small amount of land owned by the 150,000 Arabs who remained in Israel following the war is added to the Arab-owned total, in no way does the figure even remotely come close to “most of the territory.” 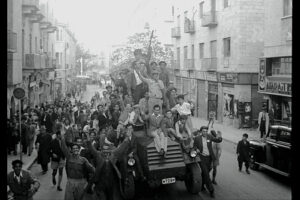 In 1948 the world, with exceptional fairness, gave [Arabs] only 44 percent of the territory of historic Palestine, despite the fact that they were two thirds of the population.

If the Partition Plan was so egregiously slanted in favor of the Jews as Bisharat claims, there might have been some sense on the part of the Arab leadership which decided to reject it. But, again, the reality was not at all as Bisharat painted it, as he concealed key information from Haaretz readers.

According to the Partition Plan, the territory of the Jewish state, which was largely composed of desert land, was to have been nearly half Arab: some 407,000 Arabs living alongside 498,000 Jews. In contrast, on the territory designated for the Arab state, which was by and large fertile land, Arabs were to have been the overwhelming majority: 725,ooo Arabs and a tiny minority of just 10,000 Jews. As the United Nations recounted about the Partition Plan (“The Origins and Evolution of the Palestine Problem: 1917-1988“):

The rationale for this patchwork territorial division was to ensure that the Jewish State encompassed the maximum number of Jews and reduced to the minimum (estimated about 10,000), those who would be left in the Arab State. But within the boundaries of the Jewish State there would remain a very large number of Palestinian Arabs: 497,000 (including 90,000 Bedouin) against 498,000 Jews.

In other words, the Partition Plan would have provided the Arabs with more than what they themselves are now demanding today: A Jewish state primarily in the desert, of which nearly half of its citizens were Arab, alongside an Arab state situated on fertile land, almost completely empty of Jews.

But Bisharat does not stop here. He pushes onward with his fabrications, outrageously alleging that David Ben-Gurion, motivated by territorial greed, was responsible for the ensuing war:

Prime Minister David Ben-Gurion wasn’t satisfied with the territory designated for the Jewish state, and Israel spread out over 78 percent of the area.

Bisharat’s message is clear: The Partition Plan was grossly unfair towards the Arabs, and yet even so Ben-Gurion “wasn’t satisfied” and sought to conquer the rest of the territory. But here’s what’s missing from Bisharat’s tale, withheld from Haaretz readers:

The 1948 war, in which Israel gained more territory than what was decided according to the Partition Plan, did not come about because Ben-Gurion “wasn’t satisfied.” Rather the 1948 war was the direct result of Arab rejectionism of all compromise, and the attack on the nascent Jewish state by forces from Egypt, Jordan, Syria, Iraq and Lebanon, intent on “total war” against the Jews and the willingness “to murder, wreck and ruin everything in [their] way,” as Fawzi al-Qawuqji, field commander of the Arab Liberation Army, put it. His aim, he said, was to “drive all the Jews into the sea.”

Who, then, was “not satisfied”? Ben-Gurion or the Arab leadership, which sought to vanquish the new Jewish state?

Bisharat continues: “In 1967, also took control of the 22 percent that remained to the Palestinians.”

Bisharat’s account ignores the fact that in 1967 Israel fought a defensive war against Jordan, whose army joined the Egyptian and Syrian forces in their attack against Israel. King Hussein’s decision to attack despite any Israeli aggression against his country was his response to an explicit Israeli message of peace intended to prevent war. As King Hussein recounted in his book “My War With Israel,” Israeli Prime Minister Levi Eshkol reached out to the Hashemite ruler: “If you don’t intervene, you will suffer no consequences.”

Thus, as a result of a war that the Arab countries initiated with the hopes once again of wiping Israel off the map, Jordan lost Judea, Samaria and the Old City of Jerusalem, Egypt lost the Gaza Strip and Syria lost the Golan Heights. The Arab rulers did not conceal their intentions to destroy Israel. For instance, as President Nasser of Egypt declared: “Our aim is the full restoration of the rights of the Palestinian people. In other words, we aim at the destruction of the State of Israel. The immediate aim: perfection of Arab military might. The national aim: the eradication of Israel” (Nov. 18, 1965).

But Schocken’s invoking of the Op-Ed defense does not hold water. The opinion page is an integral part of the paper and the editors have full responsibility for the content published there. Indeed, the opinion page has its own dedicated editors who decide which pieces should be published and which shouldn’t, request that writers fix articles with manipulations, errors or fabrications. The decision of what and what not to run is a purely editorial decision, definitely “Haaretz‘s version,” which, in this case, is based on falsehoods and half truths.

With research assistance by Alex Safian and Tamar Sternthal. For the Hebrew post, please see Presspectiva.