In response to communication from CAMERA staff and dozens of CAMERA members, editors corrected the article, removing the reference to "Israeli wars to expand territory" and amending the figure concerning descendants of Palestinian refugees residing in Jordan. See below for a detailed update, including the Editor's Note. 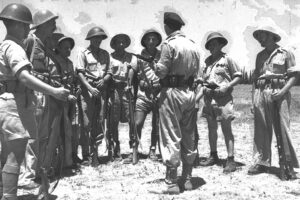 Sam Kiley, a senior international correspondent based in CNN's Abu Dhabi bureau, has rewritten the history of Israel's 1948 War of Independence and the 1967 Six-Day War. In his Oct. 3 analysis ("Any war between the US and Iran would be a catastrophe. And no one could win it"), Kiley absurdly asserts that those fateful wars were fought by Israel "to expand territory":

Close to 200,000 descendants of Palestinians who fled their country in successive Israeli wars to expand territory in 1948 and 1967, now live in Lebanon. A similar number are in Jordan.

The 1948 and 1967 wars were fought by Israel to fend off Arab campaigns to annihilate the Jewish state, not "to expand territory." As CNN has in the past reported, in May 1948: "Forces from Egypt, Syria, Jordan, Iraq and Lebanon invade, leading to the first in a series of Arab-Israeli wars." About the 1948 war, Kiley himself wrote in the Guardian in 2008: "As the ink dried on the independence scroll, the armies of Syria, Jordan and Egypt threw themselves into a battle to wipe out the Jewish state."

We hope @CNN will correct false assertion that 1948, 1967 wars were fought "to expand territory." In fact, they were fought to prevent Israel's annihilation @CAMERAorg pic.twitter.com/icT56iM4q7

In 1967, Israel attacked Egypt preemptively to once again thwart a campaign to eliminate the Jewish state. Before Israel's preemptive attack, Egypt expelled United Nations troops from the Sinai peninsula and blockaded Israel's port of Eilat, under international law a casus belli.  These belligerent Arab actions were accompanied by explicit calls from Arab leaders to destroy Israel. For instance, as President Nasser declared: "Of course, our goal is to fully restore the rights of Palestine’s people. In other words, we aim at the destruction of the State of Israel. The immediate aim: perfection of Arab military might. The national aim: the eradication of Israel" (Al Ahram, Nov. 18, 1965).
In a separate error, Kiley grossly understates the number of descendants of Palestinians who fled their homes in 1948 in 1967 and now live in Jordan, putting that figure at some 200,000. In fact, according to a 2016 Jordanian census there were more than 630,000 Palestinians without Jordanian ID cards living in Jordan. In addition to that figure, there are reportedly 1.8 million Palestinians living in Jordan who hold Jordanian citizenship.

CAMERA has contacted CNN about the errors. Stay tuned for an update about corrections.

This post was updated on Oct. 8 to include reference to Kiley's 2008 Guardian article acknowledging the 1948 Arab war to wipe out the Jewish state.

This post was updated on June 16, 2020 to include a link to the source of Nasser's quote and to provide a slightly improved translation of the Arabic, in which Nasser referred to "Palestine's people," as opposed to "the Palestinian people."

In response to communication from CAMERA staff and members concerning the false assertion that Israel fought the 1948 and 1967 wars "to expand territory," editors commendably appended the following editor's note at the bottom of the article:

Editor's note: This story has been updated. In 1948, Israel repelled invading Arab armies which attacked immediately after Israel declared its independence. In 1967, Israel launched a pre-emptive attack against what Israeli leaders believed were imminent attacks and invasions from neighboring Arab states. In both wars, Israel expanded its territory, some of which it has withdrawn from, some of which it has annexed, some of which it occupies to this day.

In addition, editors amended the text of the article, regarding Israel's efforts to fend off its annihilation in 1948 and 1967, and also concerning the number of Palestinian refugees living in Jordan. The amended text states:

Israel, America's most beloved ally in the Middle East, could immediately be sucked into a war with its neighbors that the Jewish State has frequently pointed out would be catastrophic, especially for Lebanon -- where there are 200,000 descendants of Palestinians who fled during and after the 1948 Arab Israeli war -- and following the 1967 Six Day war and subsequent occupation.

War in its neighborhood could threaten the Jordanian monarchy if the Palestinians there rise in solidarity with their brethren in Lebanon and Gaza. That's if the Iranian backed militias there attacked Israel and Israel responded with the devastating attack it has promised in defense.

Jordan has a peace treaty with Israel and is a strong US ally. There are an estimated 500,000 refugees in camps in Jordan -- descendants of Palestinians who also fled the 1948 and 1967 wars.