Within a week, Haaretz has managed to publish two Op-Eds demonizing Israel with main arguments based on blatant lies. Namely, shortly after recent West Bank terror attacks which targeted soldiers and civilians, and which claimed the lives of soldiers and a prematurely born infant, Haaretz argues that Hamas is a legitimate guerilla organization. And after Israelis were apparently responsible for vandalizing Palestinian property, a Haaretz column maintains there’s a “flourishing of the Jewish KKK,” that is similar to the American KKK “at its height.”

In the first Op-Ed, Haaretz contributor Kobi Niv claims that the Dec. 13 terror attack in Givat Assaf, near the settlement of Ofra, in which two IDF soldiers were killed, is “a legitimate action according to any law” because the attack targeted “an occupying army” (“Shooting at soldiers of occupation is legitimate,” Dec. 21).

Kobi Niv is lying. As was widely reported, including in his own newpaper, not only “soldiers of the occupying power” were targeted in the Dec. 13 attack; a young woman who stood nearby, a civilian, was also shot from point-blank range and seriously wounded.

Haaretz also previously reported that the Dec. 13 attackers responsible for the soldiers’ deaths and the women’s injuries are the same terrorists who, just a few days earlier, attacked a group of Israeli civilians waiting at a bus stop. Seven people were wounded, among them a pregnant woman who prematurely delivered by cesarean section. The baby, posthumously named Amiad Yisrael, died days later.

Even more troubling is Niv’s conclusion, which he reached based on his false claim:

Hamas and other Palestinian “terror” organizations are actually not terrorists but guerilla fighters, to all intents and purposes, since they fight regular army forces which are much stronger than they are… It’s we who have the whole range of weaponry, the most precise ones in the world, and we kill many more civilians, including children, than they do.

So, who are the terrorists and who the guerillas?

And so, by whitewashing the crime of deliberately targeting civilians by the terrorists from Ofra junction and Givat Assaf, Kobi Niv concludes that Hamas is a legitimate guerilla organization.

As for the IDF soldiers, who according to British Colonel Richard Kemp have done more to safeguard the rights of civilians than any other army in history, they are the terrorists, according to Niv.

Kobi Niv replied to Presspectiva, CAMERA’s Hebrew site: You apparently didn’t understand the article and I have no intention of explaining it to you. Read it again, perhaps you’ll figure it out.

In the second Op-Ed, attorney Michael Sfard today labels Israeli settlers who are apparently responsible for the graffiti on the walls of Palestinian houses and who damaged Palestinian-owned cars a Jewish Ku Klux Klan (“The Flourishing of the Jewish KKK“): 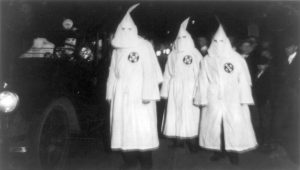 We have to face reality. We are witnessing the flourishing of a Jewish Ku Klux Klan movement. Like its American counterpart, the Jewish version also drinks from the polluted springs of religious fanaticism and separatism, only replacing the Christian iconography with its Jewish equivalent. Like white racism’s modus operandi, this Jewish racism is also based on fearmongering and violence against its equivalent of Blacks — the Palestinians.

Like the members of the KKK, the Jewish rioters throw stones, shoot, and set fire to homes, and in one instance, even burned down a house with its residents inside. And like the American Klan at its height, the Jewish Klan also enjoys law enforcement authorities who turn a blind eye.

Is it possible to equate the actions of “the American Klan at its height,” to those of the “price-tag” perpetrators, however repugnant their actions?

“At its height,” the KKK murdered thousands of innocent people, mostly African-Americans. The lynchings, often hangings, were carried out in central squares and streets, in front of a large, inflamed crowd.

Michael  Sfard responded to Presspectiva: The  equation is appropriate in terms of the ideological platform and the kind of abuse. Both of them are derived from the same religious racism and deal with hatred. Historical phenomena are never the same, only the processes are similar. Of course some things are different. I didn’t write that everything is identical.

For the Hebrew version of this post, please see Presspectiva. Translated from the Hebrew by Shlomi Ben-Meir.