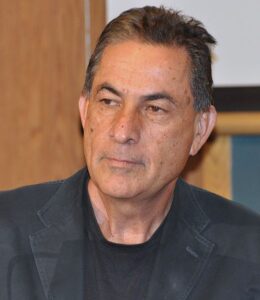 “If there is anti-Semitism, it must be fought,” opines Haaretz‘s Gideon Levy today, even as he himself ironically peddles in outright antisemitic tropes. Responding to British chief rabbi Ephraim Mirvis’ unprecedented column positing that the UK Labour Party leader is “unfit for high office” because of the rampant antisemitism flourishing in his party, Levy is himself guilty of promoting canards which fall under the Working Definition of Antisemitism  published by the International Holocaust Remembrance Alliance (“The Contract on Corbyn“).

Engaging in the age-old dual loyalty trope, which calls into question the loyalties of Jewish citizens, Levy writes:

About half of British Jews are considering fleeing if Corbyn is elected. Let them flee. The survey that showed this could actually encourage anti-Semitism: Are the Jews of Britain conditionally British? To whom is there loyalty?

The IHRA definition of antisemitism, which is accepted by numerous countries, Britain among them, includes the following:

I’ve rarely read anything as contemptuous of British Jews as this self-absorbed ignorant dross from Gideon Levy. He knows nothing, other than how to cram as many antisemitic tropes as possible into one article. https://t.co/vLSdV82M5Y

Levy than goes on to blame Jews themselves for antisemitism, citing Israeli policies as the “strong motive” for antisemitism. Levy draws a distinction between anti-Israeli versus antisemitic charges, and continues:

The Jews of Britain are blurring this difference as are many Jews throughout the world, intentionally. One can (and should) be a harsh critic without being anti-Semitic.

If the Jews of Britain and their chief rabbi were more honest and courageous, they would ask themselves: Isn’t Israel’s brutal occupation policy the strongest motive for anti-Semitism today?

The IHRA clearly sets out that holding all Jews responsible for Israeli policies falls under the antisemitism definition:

Holding Jews collectively responsible for actions of the state of Israel.

Today’s column, though, does not mark the first occasion in which Levy has traded in antisemitic tropes. Among other clauses, the IHRA definition also contains the following:

Denying the Jewish people their right to self-determination, e.g., by claiming that the existence of a State of Israel is a racist endeavor.

The charge that the State of Israel is by definition a racist endeavor is nothing new for the Haaretz writer.

Presspectiva, CAMERA’s Hebrew department, asked Gideon Levy to respond to the fact that portions of his Op-Ed fall under the IHRA definition. He responded that he has no desire to respond.

For the Hebrew version of this article, please see Presspectiva.