CAMERA’s Israel office today prompted improved Haaretz coverage of Midhat Saleh, a former member of the Syrian parliament, who, according to Syrian reports, was killed by Israeli gunfire yesterday while he was on the Syrian side of the Golan Heights border.

The article, which was both online (“Syria: Israel Assassinates Ex-lawmaker Who Served 12 Years in Israeli Jail“) and on page one of today’s print edition (“Syrian reports: Israel kills ex-MP who had been jailed in Israel”) had initially entirely omitted Saleh’s alleged role as an intelligence agent working for Iran. Nor did it mention the reason why he was in Israeli prison for 12 years. 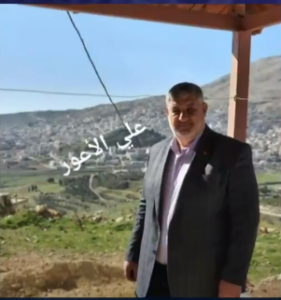 In contrast, the digital subheadline of the Hebrew edition had reported (CAMERA’s translations):

Midhat Saleh, who returned to Syria in the late 1990s following his completion of a 12-year sentence for his underground activity against Israel was the Golan representative in the parliament and responsible for the issue in the prime minister’s office. In the [Israeli] security establishment he was regarded as Iran’s contact person in the Syrian Golan

In addition, the Hebrew article reported:

Israel is refusing to comment on reports about Saleh’s assassination, but his name has been mentioned by Israeli security establishment in the years following his release, and he is considered Iran’s contact person in the Syrian Golan who has assisted in the planning of attacks against Israel.

The Hebrew report also added: “He was arrested in 1985 for underground attacks against Israel in the Golan Heights.”

Mr. Saleh, a member of the Druse religious minority, served 12 years in an Israeli prison on charges of using mines and explosives with the intention of killing Israeli civilians and soldiers. . . .

A senior Israeli defense official, who would not address Israel’s involvement in any killing, said Mr. Saleh was working with Iran’s Revolutionary Guard to establish the military infrastructure along the border necessary for an attack against Israel.

In addition, the Hebrew Mako news site, among others, reported that Saleh was arrested for his role in the attempted kidnapping of a soldier.

Shortly after CAMERA reached out to Haaretz, editors commendably added in the following essential information:

As of this writing, the Associated Press, in contrast, has failed to amend its article which likewise neglected to mention Saleh’s terror activity and his reported relationship to Iran’s Revolutionary Guards. Yesterday’s article, “Syrian shelling of rebel-held areas close to Turkey kills 4,” stated:

Separately,Syria’s government said Israeli troops on Saturday killed a former lawmaker who hailed from the Israeli-occupied Golan Heights. A government statement said Midhat Saleh was in the village of Ein el-Tinneh, on the edge of the Golan, when he was fatally shot. Saleh ran theSyriangovernment’s office there.

Saleh was born in the Israeli-occupied village of Majdal Shams and was jailed several times by Israeli authorities, the last time for 12 years until 1997. He later moved toSyriaand was elected to parliament in 1998.

See also, “Haaretz, Lost in Translation,” for additional examples in which Haaretz‘s English edition whitewashes or downplays Arab violence which had been reported in the English edition.