Jerusalem, Israel – Despite the headline of this post, media watchdog CAMERA is not branching out into meteorology. When reader James Katz of New York contacted us about The New York Times’ weather feature, it wasn’t the weather conditions that caught our attention (though Israel is experiencing unseasonably warm temperatures). While visiting Bet Shemesh, a city in central Israel, Katz last week logged on to The Times’ home page and found that, according to the weather feature at the top, right-hand corner of the page, his location was “Givat Binyamin, Palestine.”

Givat Binyamin, also known as Adam, is an Israeli community in the West Bank close to Jerusalem, just across the Green Line, about 40 kilometers away from Beit Shemesh.

Katz’s unexpected results prompted a few spots checks which likewise turned up some pretty surprising terminology. Elana Fischberger of the Israeli community of Efrat over the Green Line (the 1949 armistice line between Israel and Jordan) in the West Bank was taken aback to discover that according to The Times’ weather feature, she was located in “Jerusalem, Palestine.” A different reader in Ariel, an Israeli city in the Samaria region of the West Bank, also found herself in “Palestine,” specifically “Ramot Alon, Palestine.” Ramot Alon is another name for the Jerusalem neighborhood of Ramot, just over the Green Line and nearly 60 kilometers (travel distance) from the Israeli city of Ariel. 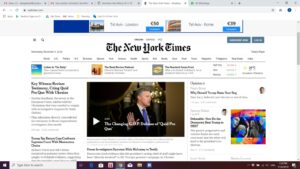 Reference to West Bank locations, even those under Palestinian control, as “Palestine” is contrary to New York Times style. The erroneous designation is particularly jarring when applied to Jerusalem, Israel’s capital.

But it wasn’t only the terminology which was hopelessly inaccurate. The weather feature invariably put users, no matter which side of the Green Line they were on, geographically in the wrong place. Thus, this CAMERA researcher, sitting in the central Israeli city of Modiin found herself 35 kilometers away in Tel Aviv, Israel. Another check from Malcha, a neighborhood in southern Jerusalem, yielded the results “Elipaz [sic], Israel.” Elifaz is a kibbutz in southern Israel, near Eilat, hundreds of kilometers away.

CAMERA contacted The Times, and an editor promised to address the problems which originated with an outside service. Indeed, several days later, the users who previously found themselves in Palestine have been restored to Israel, but not to the communities in which they are actually located. 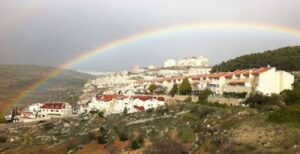 A rainbow over Efrat (Photo by Bets Marcus, Wikimedia)

Thus, Fischberger of Efrat, near Jerusalem, now finds herself in the northern Israeli city of Haifa, as opposed to “Jerusalem, Palestine.” Katz, in Beit Shemesh, now finds himself in a different city in central Israel: Ramla. (Previously, his results were “Givat Binyamin, Palestine”). As of this writing, employees of CAMERA’s Jerusalem office also find themselves relocated to Ramla, where the thermostat hovers at a balmy 29 degrees celsius. In Jerusalem, the temperature is a more comfortable 24 degrees celsius.

So while it seems The Times commendably did manage to rid its weather feature of “Palestine,” users in this region cannot still not rely on The Times for an accurate weather information for their location.