While CNN recently took the commendable step to review, then completely rewrite, a grossly tendentious Arabic report covering Tisha B’Av (July 18) events on Jerusalem’s Temple Mount, France 24 has failed to redress the biased and inciteful language in its own coverage of the same incident. France 24 is a French public television channel, owned and overseen by the French government. 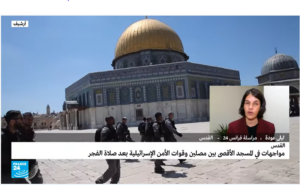 First, responding to the anchorperson’s question regarding an alleged “act of intrusion into al-Aqsa Mosque,” correspondent Layla Odeh used the same false language, fallaciously charging that “settlers” entered the mosque, thereby sparking clashes between Israeli security forces and Muslim protesters. But as CNN’s corrected Arabic report made clear, the Jewish visitors to the Temple Mount did not enter a single building; none of them “intruded” anywhere. In addition, their place of residence is unknown (and altogether irrelevant to what had happened), and therefore the pejorative label of “settlers” is unfounded.

Moreover, Odeh absurdly claimed that the Jews’ visit was the sole instance of violence that day. In fact, the Jews’ visit to the compound was non-violent, while the Muslims’ response to the visit — stone-throwing —  was clearly violent. She further whitewashed the Muslim violence by referring to the stone-throwers as “Jerusalemites practicing Ribat” (1:36). This Islamic term referring to a voluntary act of self-defense protecting an outpost against non-Muslims is regularly used in Arab media to dress up violence as a religious act, especially in Jerusalem.

Finally, Odeh referred to Israeli Arabs protesters as “Palestinians from the 1948 territories.” This terminology, used by France 24 Arabic not for the first time, delegitimizes the State of Israel in its entirety, even within boundaries recognized by the international community, France included.

Layla Odeh’s egregiously biased characterization of the July 18 events in Jerusalem casts serious doubt on her credibility and professionality as an impartial observer on the conflict. It is time that the French government, via its holding company France Médias Monde, hold France 24’s Arabic department to the same journalistic standards applied to the network’s broadcasts for Western audiences.

For the Arabic version of this post, please see CAMERA Arabic. For the French version, please see InfoEquitable.