A Syrian army statement said the attack came from the Golan Heights and that it had downed most of the missiles, in the second such strike in less than a month on the outskirts of the capital.

Significantly, on four occasions, the Reuters articles cites information from Western or regional intelligence sources noting that Iran is entrenching itself in Syria. Besides the opening sentence, Reuters’ Nayera Abdallah and Suleiman al-Khalidi report:

Regional intelligence sources say Iran’s Quds Force and militias it backs, whose presence has spread in Syria in recent years, have a strong presence in the Sayeda Zainab neighbourhood of southern Damascus where Iranian backed militias have a string of underground bases.

Israel has regularly attacked what it says are Iranian-linked targets in Syria in recent years, and stepped up such strikes this year in what Western intelligence sources describe as a shadow war to reduce Iran’s influence.

In addition, Reuters commendably recounts that Syrian President Bashar Assad has not been exactly forthcoming about the Iranian military entrenchment in his country: “Syrian President Bashar al-Assad’s government has never publicly acknowledged there are Iranian forces operating on his behalf in Syria’s civil war, only that Tehran has sent military advisers.”

O’Connor dedicates over a dozen paragraphs to Syrian charges, beginning with the opening paragraph: “Syria has demanded an end to Israeli airstrikes that it says endanger military and civilian life, and the influential international trio of Russia, Iran and Turkey agree.”

“The repeated Israeli attacks on the Syrian sovereignty are not only a technical issue related to the safety of civil air traffic in Syrian airspace,” the mission told Newsweek, “but rather an act of aggression that violates the 1974 ceasefire agreement, threatening the security and safety of civilians and civil aviation.” …

The Syrian mission said such attacks were presented an unnecessary risk to civilians.

“The recent hostile and terrorizing acts by Israel were not the first of their kind,” the Syrian mission said. “On several previous occasions, the Israeli Air Force has used civilian aircrafts for cover while attacking the Syrian territories, employing civilian passengers as human shields with sheer disregard for their feelings or lives.”

Contrary to journalistic norms, O’Connor does not give Israel the opportunity to respond to the wild Syrian accusation that Israel uses civilian aircraft for cover while striking in Syria. A year ago, when Russia made the same accusation after Syria’s air defense system nearly missed a civilian aircraft, The New York Times commendably reported:

Amos Yadlin, a retired major general in the Israeli Air Force who heads the country’s leading national-security think tank, hit back sharply at the Russian assertion, suggesting on Twitter that the Russians were taking out on Israel their frustrations with the ineptitude of Syria’s air defense forces, which use Russian equipment.

“Probably, the Russians were pre-warned about the strike over the deconfliction channels,” he wrote. But some in Russia who are “frustrated with the Syrian air defense failure to deal with the Israeli Air Force, accuse Israel who fights Iran’s continuing entrenchment in Syria.”

Recalling Syria’s downing of a Russian plane in September 2018, and Iran’s downing of the Ukrainian passenger liner over Tehran last month, Mr. Yadlin, a former fighter pilot himself, wrote that “advanced and effective” Russian air defense systems were being “recklessly employed by Syrian and Iranian operators” and “endangering civil aviation.”

Israeli Air Force jets, he wrote, “do not ‘hide’ behind civilian aircraft!” To the contrary, he added, Israel “tries to operate in hours with little civilian traffic.”

Unlike The Times, O’Connor fails to explore the possibility that Syrian misuse of Russian systems recklessly endanger civil aviation. 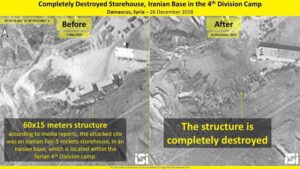 Similarly, while O’Connor is generous with space when it comes to Syrian, Iranian, Turkish and Russian claims that Israeli strikes against Iranian targets in Syria violate international law, he ignores what the U.S. has said about these strikes in the past. In 2018, both the U.S. Department of Defense and the White House defended Israel’s right to defend itself against Iranian entrenchment in Syria.

“Israel is our closest security partner in the region and we fully support Israel’s inherent right to defend itself against threats to its territory and its people,” said then Pentagon spokesman Adrian Rankine-Galloway.

“Israel is a staunch ally of the United States, and we support its right to defend itself from the Iranian-backed Syrian and militia forces in southern Syria,” the White House said in the 2018 statement.

Furthermore, while O’Connor discounts Western intelligence as relevant to the story, he reports the entrenchment of Iran’s military in Syria as merely an Israeli allegation. He writes:

Israel has accused Iran of sending personnel and recruiting partnered groups such as Hezbollah other organizations as far away as Afghanistan and Pakistan to set up forward operating bases and transfer advanced munitions to Syria.

“[The Syrian army] gives [Hezbollah] a lot of space to do what they want, and it makes life a bit uncomfortable,” an Israeli security official dealing with Syria told Newsweek last month. “It’s a big problem for us to actually decide who to strike and what to do.”

So while Israeli strikes targeting Iranian military infrastructure in Syria are characterized as “terrorizing acts,” Iran’s military entrenchment in the country, aimed at terrorizing Israel, is “a bit uncomfortable.”

The most recent round of Israeli attacks hit an air defense unit attached to Syria’s 4th Armoured Division west of Damascus on Monday, a local source told Newsweek.

This account was backed by the pro-opposition United Kingdom-based Syrian Observatory for Human Rights activist network, which further claimed that Iranian rocket depots were hit, killing up to 16 militiamen of non-Syrian nationality at two sites near the capital.

But it’s O’Connor’s misreporting of the big picture that is so disturbing. Had the Newsweek writer given a little less space to Syrian, Iranian and Russian views, and a little more to Western positions, readers might have learned, as reported by the U.S. Institute of Peace:

Iran continues to entrench itself in Syria. Syria is Iran’s only state ally and key to Tehran’s purported “forward defense” strategy. Iran is pursuing a two-track policy of military entrenchment and economic and political expansion that is designed to ensure a permanent presence and influence in Syria. For Iran, Syria is a theater for the projection of power and influence in the Middle East, a land bridge to the Levant and Mediterranean, and a third front—in addition to Lebanon and Gaza—against Israel. …

Iran’s military entrenchment in Syria takes at least three forms: the introduction of advanced weapon systems; the establishment of military command centers, often within existing regime bases; and the insertion of troops. Iran supplies the regime with a wide range of munitions, including short-range ballistic missiles, drones, and antitank missiles. In addition to its own weapons systems in Syria, which remain under Iranian command, Iran also continues to attempt to transfer sophisticated weaponry, including precision guided missiles, to Hezbollah. Iranian forces are present, according to one estimate, at nearly forty locations in the country.

Indeed, such coverage would have provided a vastly different picture than that painted by O’Connor of exactly who is “terrorizing” whom.