In early July, J Street sent 28 college students on a political tour of Israel and the West Bank. It was the group’s attempt to rival Birthright, whose popular tours have sent hundreds of thousands of young Jews to the region.

According to a New York Times report on the J Street trip, at least two of the participants said the program had them “reconsidering their belief in a Jewish state.”

And yet the Times article, by David Halbfinger, doesn’t focus on the question of whether J Street is really “pro-Israel,” as promised in the organization’s tagline but belied by the students’ reactions. The anecdote about students being turned away from Israel’s right to exist is buried deep in the piece, in the 40th paragraph, after the author unquestioningly relays a rap sheet of anti-Israel allegations. 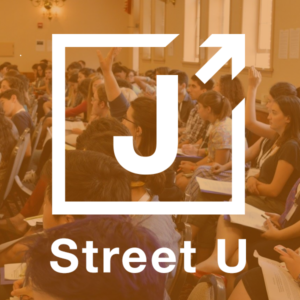 The takeaway is that if students are soured on Israel’s continued existence, it’s not because of J Street, but rather due to Israeli misbehavior that fills students with “heartbreak” and “disgust.” In advocacy journalism, it’s all about the framing.

And indeed, Halbfinger’s framing led one popular blogger to describe the piece as an “infomercial” for J Street.

If that seems unfair, consider J Street’s own reaction. In a fundraising email sent on the day Halbfinger’s piece was published, the organization’s “national director of young leadership” gushed (emphasis in original):

We knew that a bold and unique effort like this would receive attention. But I was still blown away — and filled with pride and excitement — by the coverage the “Let Our People Know” trip received this morning in a full page story in The New York Times.

So why do J Street’s critics view the Times story as an informercial, and why does the organization cast it as a cause for celebration? In part, it is because virtually the entire story is told from the point of view of J Street, its student activists, and the anti-Israel NGOs they heard from, with no skepticism or counterpoint. Despite the fact that J Street is a controversial organization, not a single word of criticism of the group is found in Halbfinger’s piece. And despite the litany of anti-Israel accusations, not a word was quoted in defense of the country.  (Indeed, Halbfinger has been charged with ignoring parts of the trip that didn’t fit neatly into the article’s anti-Israel narrative.)

Odd.
Been informed that @halbfinger was present & taking copious notes when @jstreetdotorg‘s visited .@psagotwinery for over two hours but no word in his itemhttps://t.co/RuUsCqa8Tq
Did the 3 Yesha reps do so well that he chose to ignore?@elderofziyon— ymedad (@ymedad) July 10, 2019

In this case, the one-sided reliance on Israel’s critics meant readers were misinformed on the facts. Halbfinger reports, for example, that a leader of Peace Now “told of violence including the massacre of 67 Jews in Hebron in 1929, and of 29 Muslims gunned down by a settler as they prayed in 1994, which ushered in a period of Arab suicide bombings.”

The implication is that an Israeli extremist was responsible for anti-Israel suicide bombings. But such bombings preceded the horrific 1994 mosque attack. In April 1993, Tamam Nabulsi conducted the first Palestinian suicide bombing. In October 1993, Kamal Bani Odeh blew himself up with his car while targeting Israelis, an attack the New York Times at the time described as the “fourth recent suicide bombing” by Palestinians. The New Yorker describes “Islamic Jihad’s first human-bomb operation, in September, 1993, the martyr Ala’a al Kahlout,” and refers to “Anwar Aziz, an Islamic Jihad member who blew himself up in an ambulance in Gaza, in December, 1993.” By year’s end, “about a dozen” suicide attacks were attempted, a Dec. 24, 1993 piece in the Jerusalem Post reported.

Halbfinger’s article also misleadingly claims that Israel built concrete walls along a West Bank highway “to protect Jewish drivers.” Only Jewish drivers? What about the Arab-Israeli drivers who use the road? Does the newspaper mean to say that Israel doesn’t care whether or not their cars are attacked?

More striking than the errors, though, is how the lack of counterpoint in this article differs so starkly from how the newspaper handles criticism of Palestinians. Just one month earlier, Halbfinger made sure to give the “other side” of the story when referring to the widely criticized Palestinian practice of handsomely paying terrorists:

In February … Israel began deducting about $138 million in what it calls “pay-to-slay money” from the roughly $2.5 billion a year in taxes and tariffs that it collects for and transfers to the Palestinians.

The deduction is equal to Israel’s tally of the financial support that the authority provided last year to Palestinians in Israeli prisons for attacking Israelis, to their families, and to the families of those “martyred” or killed long ago in uprisings against Israel, including suicide bombers.

Israel and Western countries see those payments, which began in the 1960s, as incentivizing terrorism. But the Palestinians see them as a vital form of welfare that rewards the sacrifices made by freedom fighters and their families, and say that many prisoners had no part in violence and did not receive fair trials. Unilateral deductions by Israel, they say, violate the agreements under which Israel collects revenue for the Palestinians.

Consider another striking example: In a December 2011 New York Times story about a book chronicling anti-Israel incitement, the unflattering details shared by Palestinian Media Watch were “balanced” with ad hominem attacks on the authors, criticism of Israel, and skepticism about the good faith of those who express concern over Palestinian hate speech.

“A new book by an Israeli watchdog group catalogs dozens of examples of messages broadcast by the Palestinian Authority for its domestic audience that would seem at odds with the pursuit of peace and a two-state solution,” the article begins.  Fair enough.

But already in the 5th paragraph, the piece  states that “for many, the subject of incitement and media monitoring has become as contentious as some of the messages, especially since these pronouncements are often used to score propaganda points.”

And a few paragraphs later, an ad hominem swipe: “Mr. Marcus, who set up Palestinian Media Watch in 1996, says that he wants to foster genuine reconciliation. His critics, however, note that he is a settler who lives in the Gush Etzion bloc south of Jerusalem, a contested area of the West Bank that Israel intends to keep under any agreement with the Palestinians.”

And further down in the piece: “Some of the examples publicized by the Israeli monitoring group are old ones that have been repeated over the years, and some of its interpretations are arguable. ‘This is not a serious attempt to solve the problem of incitement,’ said Ghassan Khatib, the spokesman for the Palestinian Authority government in the West Bank.”

Later, the lens turns to Israel: “While the Israeli government and news media usually say the same things in Hebrew and English, Palestinians and Israeli critics say they also do little to promote the idea of a Palestinian state.”

Then there is the rationalization: “Some explain the overheated language [by Palestinians] as a natural expression of such a long-running conflict, and say that any real education in the language of peace is unlikely to come before negotiators resolve the core issues.”

And again, skepticism of the critics: “Some Israelis struggle with the practice of monitoring the Palestinian news media, acknowledging the importance of knowing what is being said in Arabic, yet disturbed by how its dissemination is exploited by those not eager to see Israel make concessions.”

It would be one thing if this were how the Times reports on critics of both Israel and the Palestinians. But as the J Street story reminds us, the newspaper’s standards are shifty. There is no commentary about J Street and their fellow critics looking to score “propaganda points.” No “arguable” interpretations. No “natural expression” of the conflict. No “exploitation” by anti-Israel extremists. The journalistic skepticism and right of reply that was seemingly important when reporting on Palestinian Media Watch disappears entirely in the report on J Street.

This isn’t impartial, hard-hitting journalism. It’s advocacy for anti-Israel advocates. And despite repeated promises of fairness, the paper can’t seem to avoid such partisan reporting.