In response to missives by CAMERA, the newspaper initially stood by the article but eventually corrected one of its errors. See below for a detailed updates.

Jonathan Weisman insists that the tribulations of 2018 brought American Jews and their Israeli counterparts “ever closer to a breaking point.” That, at least, is how he put it in the opening sentence of his Jan. 4, 2019 news analysis piece in the New York Times.

So convincing did the author seemingly find his own arguments that, at some point between his first and last sentences, the breaking point went from near to already here: “The Great Schism is upon us,” Weisman concluded in his dramatic final sentence.

It’s a sweeping hypothesis. And yet the analysis, published in the newspaper’s Opinion section, doesn’t offer a single statistic to directly substantiate his claim. Do any surveys confirm the existence of a Great Schism? Or the idea that “neither side sees the other as caring for its basic well-being,” a view Weisman approvingly attributes to a Chicago rabbi? Or that Israeli citizens “are increasingly dismissive of the views of American Jews”? Or that younger American Jews see in Israel “a bully, armed and indifferent”? If so, Weisman doesn’t share them.

The author does cite some polling numbers from the Pew Research Center meant to give credence to his case. But those numbers aren’t just wrested from their context in a way likely to mislead. They are flatly misreported.

Weisman’s numerical evidence for the schism amounts to this: Although most American Jews voted for Democrats in the recent midterm elections, most Israeli Jews remain today supportive of the United States. In his words,

To be sure, a vocal minority of Jews in Israel remain queasy about the American president, just as a vocal minority of Jews in the United States strongly support him. But more than 75 percent of American Jews voted for the Democrats in the midterm elections; 69 percent of Israelis have a positive view of the United States under Mr. Trump, up from 49 percent in 2015, according to the Pew Research Center. Israel is one of the few developed countries where opinion about the United States has improved since Mr. Trump took office.

Weisman is wrong. Pew’s 2018 survey, conducted during the second year of the Trump administration, found that 83 percent of Israelis have a positive view of the United States, not 69 percent. And what of the “improvement” in Israelis’ opinion about the United States since Trump took office? In the two surveys taken during the Trump administration, the overall favorability numbers were 81 percent in 2017, and increased to 83 percent in 2018, a difference that’s less than the poll’s margin of error of 4-plus percent. (Between these years, “very favorable” did gain some ground against “somewhat favorable.”) Prior to that, in 2015, the last survey taken during the Barak Obama administration found virtually identical numbers, with 81 percent — not, as Weisman claimed, 49 percent — viewing the U.S. favorably. And a year before that, also while Obama was in office, 84 percent of Israelis felt favorably about their primary ally, a number unmatched since Trump took office. 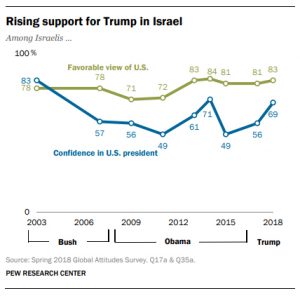 So where did Weisman's 69 percent figure come from? The author apparently confused two distinct survey questions — one about favorable views of the United States, and a separate one about how much confidence people have that Trump, specifically, will do the right thing in global affairs, specifically. (See here for the wording of that question.) To the latter question, 69 percent of Israelis did express confidence in Trump’s foreign policy. And while this was certainly an increase from the 49 percent who said the same in 2015, as then-President Obama was moving toward an unpopular nuclear agreement with Iran, the current figure under Trump, 69 percent, is less than the highs of Israeli confidence during both the Obama administration and that of George W. Bush.

In other words, even if he hadn’t misinformed readers about the poll question, the numbers Weisman cited (and mislabeled) aren’t proof of a Great Schism. They’re simply more of the same. Yes, Israelis seemed pleased by Trump’s withdrawal from the Iran deal and his decision to move the U.S. embassy to Jerusalem. But the change in sentiment represents nothing remarkable. Sometimes people are happier about US foreign policy. Sometimes they’re less happy. Sometimes Israelis are more confident in Democratic presidents who are also supported by most American Jews. And sometimes they're more confident in Republican presidents.

CAMERA has called on the New York Times to likewise correct Weisman’s errors about the Pew poll and the chief rabbi.

The misrepresentation of the Pew poll isn’t Weisman’s only error. Again as purported evidence of a schism, the author claims an Israeli religious official had “refused” to use the word synagogue to describe Pittsburgh's Tree of Life synagogue, where 11 Jews were murdered late last year. “Israel’s chief Ashkenazi rabbi, after the slaughter in Pittsburgh, refused to refer to the Conservative Tree of Life as a synagogue at all, calling it ‘a place with a profound Jewish flavor,’” the piece insists.

But the chief rabbi, David Lau, in fact did refer to Tree of Life as a synagogue. In his interview with the Israeli newspaper Makor Rishon, he dismissed others who refused to use the word synagogue, and forcefully challenged the view, by anyone, that the Jewish denomination of those killed has any relevance whatsoever. What matters, he said, is that Jews were killed as Jews, and not what “synagogue” they were praying at.

In his words: “Does it make any difference which synagogue they attended or which liturgical text of prayers they were reciting?!”

The interviewing reporter continued to harp on the question of their Conservative denomination and how that is regarded by some Haredi Jews, and the rabbi continued to take umbrage at the line of questioning and any attempts to focus on community divisions when what matters is that Jews were killed in their house of worship. The fact that Lau didn’t repeat, a second time, the word synagogue led to some sensationalist accounts that wrongly claimed he refused to use the word. But again, as the original interview makes clear, he used the word. And even when he relied on other synonyms, his distaste both for those who would avoid the word synagogue and for those who would focus attention on the difference in denomination was evident.

The editor-in-chief of the Jewish Telegraphic Agency raised the same points in a piece entitled “What Israeli Chief Rabbi David Lau really said about the Pittsburgh shooting,” and appended a correction to an earlier JTA article that had erred on the use of the word synagogue. The correction reads: “An earlier version of this story referred incorrectly to an interview with Rabbi David Lau saying that he declined to refer to the Tree of Life Congregation in Pittsburgh as a ‘synagogue.’ In fact, he did refer to it as a synagogue in the interview.”

CAMERA has called on the New York Times to likewise correct Weisman’s errors about the Pew poll and the chief rabbi. They have yet to do so.

The rest of Weisman’s piece is scarcely stronger. In the style of anti-Israel blogs, Weisman bombards readers with a list of purported Israeli transgressions. He insists that the U.S. president is “basically doing whatever the government of Benjamin Netanyahu asks,” a statement that echoes bigoted claims of Jewish control over the U.S. government. This assertion is especially stunning coming from a New York Times journalist because it is so mundane when coming, as it generally does, from former K.K.K. leader David Duke and other anti-Semites.

He cites Israel’s attempts to cultivate good relations with countries like Hungary, Brazil, and Poland despite the illiberal leadership in those countries. He points to ugly comments by 26-year-old son of Israeli prime minister Benjamin Netanyahu.

He references the power of Israel’s Chief Rabbinate, saying that “a recent law tried to reinstate the Chief Rabbinate as the only authority that can legally convert non-Orthodox Jews in Israel,” and pointing to the Rabbinate’s control over Israeli marriages. But if these points are meant as evidence of American and Israeli Jews reaching a “breaking point,” with the assumption being that Americans view the power of the chief rabbinate as religious overreach, they in fact suggests the opposite. A majority of Israelis are in favor of civil unions, oppose the Rabbinate’s control over marriages, and firmly reject their power over conversions. The power of the Rabbinate, then, unites rather than divides the two geographic groups of Jews.

So what is Weisman’s point in raising the issue? It might be that his goal, with the article in general, is less to describe a breaking point between American Jews and their Israeli siblings than to prescribe one. After all, a scathing review in the Atlantic of Weisman’s latest book, (((Semitism))), makes clear his distaste for the importance American Jews place on Israel, and highlights his odd view that concern for the well-being of Israel’s Jews somehow precludes American Jews from focusing on other important things.

“The American Jewish obsession with Israel,” he insists in the book, “has taken our eyes off not only the politics of our own country, the growing gulf between rich and poor, and the rising tide of nationalism but also our own grounding in faith.”

The “Israel diversion,” he insists, “is proving to be a trap.”

Jewish organizations, he laments, are “enthralled with [the] same mission … all spoke of, lobbied on, and raised money for Israel, Israel, Israel.”

And he wants that to change. He’s entitled to such a view, of course. But it should be clear that he has a horse in this race. He wants a Great Schism. And like so many other New York Times articles, his piece, errors and all, seems designed to promote one.

Correction: An earlier version of this article stated that Meir Lau is Israel's chief Ashkenazi rabbi. Although he had previously held that role, it is now held by his son, David Lau.

When challenged about the two factual errors discussed below, New York Times editors told CAMERA they stand by the piece.

The newspaper's Guideline's on Integrity promises readers that "The Times recognizes an ethical responsibility to correct all its factual errors, large and small," and add that "In case of reasonable doubt or disagreement about the facts, we can acknowledge that a statement was “imprecise” or “incomplete” even if we are not sure it was wrong."

In an email to CAMERA, the Pew Research Center confirmed that in last year's poll "83% of Israelis have a favorable view of the U.S." They reemphasized that "the 69% data point is specifically 'confidence in the U.S. president to do the right thing regarding world affairs.'"

After further communication with CAMERA, the New York Times has published a correction to Jonathan Weisman's article. It states:

The correction failed to note that Pew asked specifically about confidence in President Trump's foreign policy, not about Trump in general. And while the newspaper now points out that the percentage of Israelis expressing confidence is higher than it was in 2015 under Obama, it omits that confidence in Obama's foreign policy had been 71 percent in 2014, in line with or higher than Trump's current numbers. In other words, the numbers don't show an integral preference for Trump, as the Times article implies, but rather that Israeli views on American foreign policy shift depending on the president's foreign policy priorities in any given year.