Given the complicated geopolitical realities of the disputed city of Jerusalem, including municipal boundaries, a 1949 armistice line, and a security barrier, journalists have a particular responsibility to be precise. Unfortunately, multiple news items earlier this week erroneously reported that Israeli demolished residential buildings within Jerusalem, when in fact the Wadi Hummus residences in question – most of them still under construction – were outside municipal boundaries. 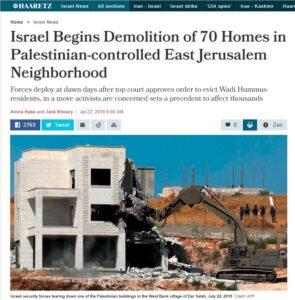 The first paragraph in both the digital and print editions repeats the error, wrongly stating that the area lies within east Jerusalem. The digital edition, for instance, states:

Israeli forces began Monday demolishing buildings in an East Jerusalem neighborhood under the control of the Palestinian Authority. . .  (Emphases added.)

While the Wadi Hummus buildings did lie in territory under the control of the Palestinian Authority, that land is in the West Bank, outside the municipal boundaries of Jerusalem.

In June, Israel’s High Court of Justice has ruled in favor of the demolition of 13 large buildings in the Wadi Hummus neighborhood, located on the outskirts of Jerusalem.

It is on the edge of the Palestinian village of Sur Baher, in southeast Jerusalem. Unlike the rest of the village, this neighborhood lies beyond the city’s municipal boundaries, in the West Bank.

Reuters, which according to a note at the bottom of the piece, contributed to the article by Amira Hass and Jack Khoury correctly identified Wadi Hummus as an area in the West Bank, outside of Jerusalem. Reuters reported (“Israel demolishes Palestinian homes near West Bank barrier“):

Israeli forces began demolishing Palestinian homes near a military barrier on the outskirts of Jerusalem on Monday, in the face of protests and international criticism.

Bulldozers accompanied by hundreds of Israeli police and soldiers moved into Sur Baher, a Palestinian village on the edge of East Jerusalem in an area that Israel captured and occupied in the 1967 Middle East War. . . .

Sur Baher’s political geography is complicated. Parts of the sprawling village lie inside the municipal boundary of Israeli-occupied East Jerusalem and parts outside the barrier, in the West Bank. But some lies in between: just outside the Jerusalem line but still on the Israeli side of the barrier.

Palestinian officials said some of the threatened structures lie within their areas of control. 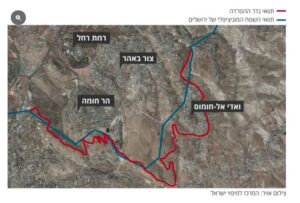 A screenshot from Haaretz of an aerial image from Survey of Israel showing Wadi Hummus, east of Jerusalem’s municipal boundary (the blue line)

The Hebrew headline and first paragraph of the same article also incorrectly place Wadi Hummus in east Jerusalem, but a map included with the article clearly shows the neighborhood outside Jerusalem’s boundaries. Haaretz has failed to follow up on CAMERA’s request to clarify the coverage.

Israeli work crews on Monday began demolishing dozens of Palestinian homes in an east Jerusalem neighborhood, in one of the largest operations of its kind in years.

Following communication from CAMERA, AP improved the opening sentence but declined to correct the headline. The amended copy now more accurately refers to “homes on the outskirts of an east Jerusalem neighborhood.”