Some international media outlets covering the publication of B’Tselem’s vitriolic report last week outrageously demonizing Israel with apartheid and “Jewish supremacy” have inflated the credibility of the controversial organization by labeling it Israel’s “leading human rights organization.” Yet, a close examination of the organization’s activity and successes in advancing rights of Palestinians, or more accurately lack thereof, exposes the falsity of the title. 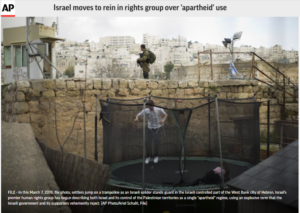 The Associated Press’ initial article, republished in media outlets around the world, carried the headline “Leading human rights calls Israel an ‘apartheid’ state.” AP’s Joseph Krauss opened his Jan. 12 article referring to B’Tselem as, “a leading human right group.” In the ensuing days, AP upped the ante, publishing photograph captions on Jan. 18 terming B’Tselem, “Israel’s premier human rights group,” and leaving AP readers wondering what exactly B’Tselem did in the previous six days which catapulted it from a top spot to the premier spot. (Hover over the captions in the provided hyperlink to see the captions.)

Public Radio International, in its “The World” broadcast, also went with “a leading Israeli rights group” designation, as did NBC (“a leading Israeli human rights group”), and The Guardian (“a leading domestic rights group”), among others.
But does B’Tselem’s record justify the credit of being a “leading human rights group” in Israel, much less the country’s “premier” human rights organization?
If the criteria for gauging success of a human rights organization is advancing human rights, then B’Tselem comes up woefully short. Progress in improving human rights in Israel and the West Bank is a legal battle waged in the Knesset and the courts, and in recent years B’Tselem has zero presence, activity and accomplishments in these areas. Tellingly, B’Tselem’s 2019 Activity Report mentions no action taken in the Knesset or courts.
Also striking is the fact that the organization’s 37-strong staff belong to a variety of departments: research (two staffers), data coordination (five staffers), field research department (12 staffers), public outreach department (nine),  international relations department (three), administration department (six). Yet B’Tselem’s staff list does not indicate that the organization employs a single lawyer. B’Tselem has no legal department or advisor listed, despite the fact that it is within the world of law that the human rights struggle is waged.
The lack of a legal department raises questions about B’Tselem’s research and publications. How does the organization issue reports on international law without a dedicated legal team? The term “apartheid,” central to the eponymous new “This is Apartheid” report, is a legal term. What legal expertise does B’Tselem possess enabling it to expand the definition to apply to Israel and the Palestinian territories? 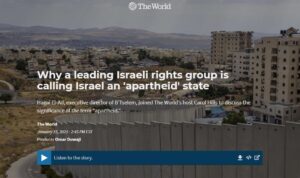 On the international level of advancing human rights, the battle is waged at the United Nations Council on Human Rights in Geneva, and B’Tselem is absent from that key venue as well. A number of Israeli human rights organizations submitted briefs to the 2019 International Convention for the Elimination For All Forms of Racial Discrimination, the premier international mechanism for ensuring Israel’s compliance with human rights law. It is precisely the relevant forum for the issues that B’Tselem purports to address. The Israeli organizations that provided material for the important event included Adalah – The Legal Center for Minority Rights in Israel, Hotline for Refugees in Migrants, Israel Religious Action Center, Israeli Committee Against House Demolition, Negev Coexistence Forum for Civil Equality, and NGO Monitor. Nor did B’Tselem contribute to the 2018 Universal Periodic Review on Israel. (Adalah did.) Where was B’Tselem, allegedly the “leading human rights organization” in these critical forums?
With no activity in the Knesset, in the Israeli courts or at the Council on Human Rights, B’Tselem’s accomplishments are limited to social media visibility, mainstream media coverage, field trips, publications, reports, freedom of information requests (how many were actually successful?), and community events, as detailed in the organization’s 2019 activity report.
But what of actual change on the ground in the area of human rights? While B’Tselem cannot point to any accomplishment in advancing human rights, it can bask in its star status among international journalists who  shower it with uncritical coverage which falsely inflates the organization’s influence and impact. But even that media success reflects a failure. B’Tselem’s focus on the international media community is a reflection of its failure to have an impact on local media and public. As The Seventh Eye noted, the organization hardly even makes a dent in Israeli media. B’Tselem’s “This is apartheid” report, which is enjoying extensive international coverage, was barely noted by the Hebrew-language press.
How Does B’Tselem Measure Up to Others?
How does B’Tselem’s profile — its lack of a legal department, its absence at the Knesset, Israeli courts, and the United Nations’ Human Rights Council, and its lack of improvements on the ground —measure up to other human rights organizations in Israel? According to the website of Association for Civil Rights in Israel:

Established in 1972, ACRI is Israel’s oldest, largest human rights organization, and the only one dealing with the entire spectrum of rights and civil liberties issues in Israel and the Occupied Territories. . . .

Since its inception, ACRI has been consistently successful in bringing precedent-setting litigation to the High Court of Justice and has contributed significantly to the protection of human rights in Israel and the Occupied Territories. ACRI is widely respected within the legal community and among decision makers, the media and the public at large.

Regarding its work in the Knesset, where it has the potential to makes a true impact on the state,

ACRI’s policy advocacy department is dedicated to monitoring and advising on proposed bills in the Knesset to ensure the civil and political rights of all individuals are equally considered and protected. ACRI works to reduce infringements of human rights in bills and government policies, while initiating and supporting legislation that protects civil liberties and freedoms.  ACRI’s work in the Knesset puts human rights issues on the public agenda and keeps decision makers informed via professional position papers and participation in Knesset committee discussions and related public forums. [Ibid]

The diverse range of topics that ACRI addresses include Covid and human rights, Arab minority rights, right to electricity, right to health, freedom of expression and human rights in the digital age. But it is also active on  Palestinian issues. Its website states:

ACRI works within the legal system to promote the fair treatment of Palestinians before the law, to oppose the illegal allotment and usage of land for settlement building and military training, to petition against home demolitions and evacuations, to promote freedom of movement and to continue working towards the recognition of all other rights guaranteed under international law. Additionally, ACRI engages in public outreach to educate residents about their rights and to inform the Israeli public of the impact of the Occupation in order to increase accountability of Israeli leadership and military personnel.

Unlike B’Tselem, it works within Israel’s legal system, thereby affording it the opportunity to make an impact on the ground. ACRI has a robust legal department to wage its fight where it counts — in the legal realm. Out of a staff of 36 (this figure does not include interns and is almost equivalent in size to B’Tselem’s staff of 37), 15 (almost 42 percent) belong to the legal department. Aside from the legal department, ACRI’s executive director is an attorney, and the organization has a chief legal advisor. (Again, B’Tselem’s staff director does not list any lawyers on staff.)
B’Tselem’s work is largely limited to issuing reports only on issues that involve Palestinians. According to its website, its mission is “to end Israel’s occupation, recognizing that this is the only way to achieve a future that ensures human rights, democracy, liberty and equality to all people, Palestinian and Israeli alike, living on the bit of land between the Jordan River and the Mediterranean Sea.” In short, that’s a very limited mandate compared to ACRI’s, and it employs a severely curtailed range of activity to achieve its mandate. The designation of a rights group that deals only with Palestinian issues as Israel’s top human right rights organization (its lack of accomplishments notwithstanding) — as if there are no other pressing human rights issues in the country — strengthens the conviction of many that the foreign media sees Israel only through the prism of Palestinians.
Worker’s Hotline: The Proof Is In the (Workers’) Money
According to its website, the Worker’s Hotline employs a staff of 16, of which five (over 30 percent) are lawyers. In 2018, the organizations served over 55,000 workers and recovered more than 25 million NIS in total withheld entitled to workers by law. The Worker’s Hotline is also active in advancing Palestinian workers’ rights — and has published a list of on the ground achievements. In recent days, the Worker’s Hotline filed a petition with Israel’s High Court urging health insurance coverage for Palestinian workers employed and staying overnight in Israel, in light of the coronavirus crisis. 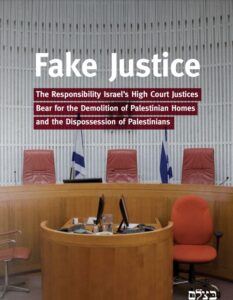 Unlike ACRI and Worker’s Hotline, B’Tselem has no legal activity, much less accomplishments, to highlight. B’Tselem writes many reports complaining about Israel’s High Court, but unlike ACRI, it can’t claim any victories there. A 2019 B’Tselem report accused Israel’s High Court of “Fake Justice” (at left). B’Tselem’s record suggests “fake human rights.”
Many other human rights organizations are waging legal battles in Israel, and accomplishing notable victories. This article is not meant to be a comprehensive study evaluating all of them, and the selection of ACRI and Worker’s Hotline was made on a representative basis to underscore that while many Israeli organizations are marking success on the human rights front, B’Tselem is not one of them.

Aside from B’Tselem’s failure to procure any human rights advancements in recent years,  additional troubling issues which ought to disqualify the group as a “leading human rights group include the employment of a Holocaust denier, the staging of footage, and misrepresentations of Palestinians who participated in violent attacks as “not involved in hostilities.”

With thanks to Anne Herzberg of NGO Monitor for research assistance.