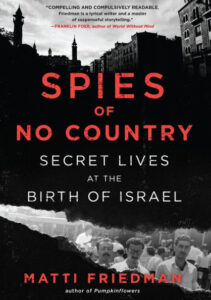 Friedman, a Canadian-born Israeli and former Associated Press correspondent, has devoted much of his career to shedding light on the unexplored and misunderstood aspects of Israel and the Middle East. His latest work, Spies of No Country: Secret Lives at the Birth of Israel, examines the careers of four spies, born in Arab lands, working for the fledgling Jewish state. Their stories, he notes, have “something to tell us about the country they helped create.”

Friedman tells their tales in vivid and highly readable prose — the careful Gamliel Cohen, alias Yussef, born in Damascus, Syria; the quiet Yemeni-born Havakuk Cohen, alias Ibrahim; Yakuba Cohen, an impatient Jerusalemite who goes by the name Jamil; and Isaac Shoshan, aka Abdul Karim, a Jew from Syria, whose dalliances with a Lebanese Christian woman endanger the unit. That unit is the Arab Section, or — as it appears in official reports — “The Dawn.”

Friedman is careful not to exaggerate or embellish history. The heretofore untold story of the Arab Section is thrilling and interesting enough.

The Arab Section had its origins as a British creation to bolster the fight against the Nazis in the Middle East. Training was haphazard at best, and disorganization was rampant. Initially, the Arab Section “didn’t even own a radio,” Friedman notes. In another case, an operative tasked with being the getaway driver had never driven a car. Operational security was often — certainly by today’s standards — lackluster. Language skills were practiced in Arab markets, barbershops, restaurants, and buses.

Portions of the Koran were memorized — although, as Friedman recounts, this didn’t prevent the agents from feeling scared when entering mosques and posing as Muslims. The men lived and worked on a knife’s edge. The fact that they were working for a small country that, for much of the story, had an uncertain future, compounded the danger. There was no Langley to save them if trouble arose. Communication with superiors back home was scattershot and — often for many months — non-existent.

Spies of No Country focuses on “twenty pivotal months, from January 1948 through August of the following year; on two Levantine port cities eighty miles apart, Haifa and Beirut; and on four young people drawn from the margins of their society into the center of events.”

The men — young adults really (some were still in their teens) — were engaged in a struggle in which Israel’s very creation was threatened, both by Palestinian Arab militias and later by Arab states whose power and personnel dwarfed that of the tiny Jewish nation. The stakes were high. As the spies are reminded before the 1948 war commences: “The corpse of Nazi Germany was still warm.” And, as several Arabs make clear to the undercover Jewish spies, another mass slaughter of Jews is precisely what they hoped to achieve.

But Spies of No Country is more than just a book about espionage and war. Ultimately, it’s a book about identity — both Israel’s and the spies’. That identity, Friedman makes clear, is both rich and complex.

Many of Israel’s founders were Ashkenazi Jews from Europe. These men and women, many of them socialist and secular, helped construct the edifice of the state. By contrast, the Mizrahi Jews from Muslim lands, many of them religious and not taken with the socialist kibbutzim, sought refuge from the persecution and violence that was largely their lot after they were expelled in the wake of Israel’s recreation.

When the modern State of Israel was created, the overwhelming majority of its population was Ashkenazi. Today, nearly half of the Jews in Israel trace their recent ancestry to Muslim lands. Yet many accounts, historical and popular, have overlooked the contributions of these Jews in Israel’s early years. “This was a story,” Friedman notes, “whose time has come.”

Friedman does a masterful job of telling it.

Having fled the Muslim Arab world that sought to subjugate and destroy them, the identities and skill sets of the Arab Section spies proved invaluable to the Jewish nation that had taken them in. But “there was a unique price” to the life they had adopted: “they had to become the people they’d fled.” This leads to some heartbreaking moments, including when the undercover spies, fearful of being discovered and seeking to blend in, call for Israel’s destruction to an Arab man that they only belatedly realize is Jewish himself.

In the years after 1948, more than 850,000 Jews were ejected from Middle Eastern lands — lands that their communities had often lived in for centuries, in some cases millennia. As the late Martin Gilbert recounted in his 2010 book, In Ishmael’s House: A History of Jews in Muslim Lands, their property was usually seized or destroyed. They faced torture, years of imprisonment, and murder. An entire civilization, rich in culture and history, was forcibly and violently uprooted. And the international community — to its everlasting shame — has largely ignored their plight.

Matti Friedman has done a considerable service by highlighting this vanquished world, and the men and women who helped build another one in Israel. Time spent with old spies is not wasted, and this book should be required reading — especially for those who ignore the Jewish people’s roots, both in their ancestral homeland and the broader Middle East.

(Note this book review originally appeared in the Algemeiner on March 19, 2019)