An influential Bishop in Italy has weighed in on the controversy surrounding a painting produced by an Italian artist, Giovanni Gasparro. The painting, which Gasparro produced in late 2019 and early 2020 is titled “The Martyrdom of St. Simon of Trento for Jewish Ritual Murder.” 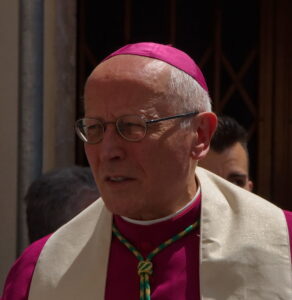 Bishop Ambrogio Spreafico, who serves as president of the Episcopal Commission of the Italian Episcopal Conference for ecumenism and dialogue, denounced the painting as “a sad demonstration of how much the human mind chases old stereotypes.” (The Bishop’s denunciation of Gasparro’s antisemitic painting was published in Chiesa, an influential Catholic newspaper in Italy.)

The painting depicts a blood libel based on debunked accusations leveled at the Jewish community living in Trent in 1475. Fifteen Jews were the victims of judicially sanctioned murder as a result of this libel. Most of the victims confessed under torture.

Sadly, Gasparro, who posted images of his painting on his Facebook page on March 25, 2020, is a well-known painter in Italy and has done a substantial work for Catholic places of worship in that country, which makes Bishop Spreafico’s robust condemnation particularly compelling.

The Bishop’s condemnation demonstrates that Gasparro didn’t just offend Jewish sensibilities in a naked attempt to attract attention, but crossed a line regarding Church teachings by promoting a blood libel that had been repudiated by the Church after the passage of Nostra Aetate by the Second Vatican Council (Vatican II) in 1965. Nostra Aetate rejected the notion that the Jewish people are collectively responsible for the death of Jesus and condemned antisemitism in all its forms.

“Sometimes there are faithful who prefer to fabricate truths detached from Tradition, effectively slipping into heresy, while Vatican II documents are mistakenly perceived as optional, which one is free to know and to observe or not to observe,” the Bishop wrote.

Gasparro’s painting generated a hue and cry on the part of Jews and Christians, (including many Catholics), throughout the world who have come to regard the Christian faith in a new light in the years after the Vatican issued Nostra Aetate in 1965.

There are a number of other church statements issued with varying degrees of authority that follow upon Nostra Aetate. These statements include two documents issued by the Commission for Religious Relations With the Jews. In 1974, this commission issued a documented titled “Guidelines and Suggestions for Implementing theh Conciliar Declaration ‘Nostra Aetate’ and in 1982, it issued “Notes on the Correct Way to Present Jews and Judaism in Preaching and Catechesis in the Roman Catholic Church.”

Gasparro’s painting contravenes the letter and spirit of these documents. It injects a visual grammar of contempt into public and theological discourse that is unworthy of the Christian faith and of the Catholic Church. It is right and just that it was condemned by Bishop Spreafico

What makes Gasparro’s painting so troubling is that it puts Jewish leaders in a troubling bind. When they complain about Gasparro’s hateful imagery, it incites antisemites and rewards Gasparro with the publicity and attention that he seeks by producing such hateful artwork. After Facebook forced Gasparro to remove some of the more offensive photos of his painting from his account, he complained of being “censored.” But if Jewish leaders said nothing, they gave the message that they were acquiescing to blood libels as part of a new normal.

By condemning Gasparro’s lurid and pornographic painting in such an explicit manner, Bishop Spreafico removed the controversy out of the realm of Christian-Jewish relations and placed it where it belongs –into the realm of Christian doctrine. Gasparro is not speaking on behalf of the Catholic church, but merely revealing his personal bigotry toward Jews in a manner that violates the tenets of the Church.

The pictures cannot be regarded as an expression of the Christian faith, Bishop Spreafico declared, adding that they have nothing to do with Christianity and that “Catholics should conform to the Magisterium [teachings] of the Church and definitively suppress these anti-Semitic regurgitations.”

The Bishop’s denunciations came after CAMERA and a number of other information sources, including The Algemeiner, the Simon Wiesenthal Center alerted stakeholders to Gasparro’s outrageous painting.