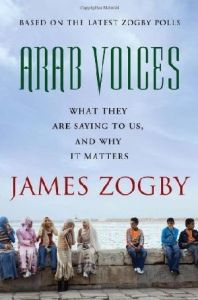 While conceding that “… much of it [Arab world] [is] backward in its dependence on conspiracy theories,” Zogby ignores polling showing that a majority in the Arab and Muslim world has for several years proclaimed 9/11 conspiracy theories claiming that the terrorist acts were secretly perpetrated by the U.S. government, CIA and Israel’s Mossad. The supposed purpose of this conspiracy and mass murder was to inculcate anti-Muslim hate in order to provide a pretext for attacking innocent Muslim countries. According to an authoritative study authored by Matthew A. Gentzkow & Jesse M. Shapiro, entitled “Media, Education and Anti-Americanism in the Muslim World” published in the Journal of Economic Perspectives – Volume 18, Number 3 (pages 117–133), in a poll conducted in seven Muslim countries, 78 percent of respondents said that they do not believe the 9/11 attacks were carried out by Arabs. The most popular account, in these countries is that 9/11 was the work of the U.S. or Israeli governments. This belief, inculcated by Arab media, mosques and schools, is met essentially with silence from James Zogby.
Likewise, while mentioning that President Obama “urged the Palestinians to stop violence and verbal incitement against Israel,” Zogby does not elaborate about the voices in the Arab media and mosques urging violence against Israelis (for examples see here, here and here).
Different Christian Arab Perceptions
Other Christian Arab Americans hold views opposite to those of Zogby, for example, Brigitte Gabriel, who, like Zogby, is an American Arab of Lebanese Maronite Christian descent. Ms. Gabriel, an anti-terrorist activist, author of a book on the New York Times best seller list, President of the American Congress for Truth (ACT), was raised in Lebanon and immigrated to the U.S. in 1989. Ms. Gabriel spoke publicly in 2004:

I was raised in Lebanon where I was taught that the Jews were evil, Israel was the devil, and the only time we will have peace in the Middle East is when we kill all the Jews and drive them into the sea. When the Muslims and Palestinians declared Jihad on the Christians in 1975, they started massacring the Christians city after city… It was Israel that came to help the Christians in Lebanon. My mother was wounded by a Muslim’s shell and was taken into an Israeli hospital for treatment. When we entered the emergency room I was shocked at what I saw. There were hundreds of people wounded, Muslims, Palestinians, Christian Lebanese and Israeli soldiers lying on the floor. The doctors treated everyone according to their injury. They treated my mother before they treated the Israeli soldier lying next to her. They didn’t see religion. They didn’t see political affiliation. They saw people in need and they helped. (Duke University speech on October 14, 2004).

Other Arab Americans who hold views dissimilar to Zogby’s include Nonie Darwish, an Egyptian-American human rights activist, and founder of Arabs For Israel.

Zogby’s anti-Israel bent is clearly seen in his Christmas day 2010 Huffington Post Website blog. Reflecting on the themes of the Christmas story, he claims: “Two thousand years ago, Palestine was subject to a harsh occupation, much as it is today.” Of course, it was not “Palestine” that Rome occupied harshly, it was Judea, renamed “Palestine” in echo of the long vanished, non-Arab Philistines by the Romans after the Jews’ bloody revolt. But this sort of anti-Israel manipulation is not unexpected during the Christmas season. Zogby, as a Christian, presumably is aware from his knowledge of the New Testament that the area at that time was called Judea. But Zogby evidently has bigger fish to fry. On Christmas themes, he seems unconcerned that since the Palestinian Authority took over civil control of West Bank cities such as Bethlehem, much of the Christian Arab population has fled due to Muslim persecution.

On the American Media
On page 209, Zogby  praises and condemns various aspects of the American news media. It’s hard to argue with his observation that “major U.S. networks provide just a half hour of nightly news, with much of this domestically focused and too much of it soft human-interest stories. The three cable news networks in the United States (CNN, Fox News, and MSNBC) have become overly self-absorbed and partisan even when they cover global issues.”
But furthering his anti-Israel agenda, Zogby praises (on page 209) various reporters and media entities he considers to be “bright lights in the U.S. media,” especially Christiane Amanpour, extolling her CNN documentary “Generation Islam” (August 2009) as an “extraordinary series” (first hour on Afghanistan, second on Gaza). CAMERA exposed Amanpour’s report as manipulative, falsely implying that “[T]he bad guys were not the Islamists who rule Gaza, teaching hatred of Christians and Jews, and attacking Israeli civilians with suicide bombers and thousands of rockets. Instead, Amanpour’s bad guys were the Jews of Israel, for supposedly oppressing the Palestinians, and she offered not a single mention of the hate indo
ctrination that Hamas specializes in.”

James Zogby’s Arab Voices, a smooth but shallow apology for some unsettling views widespread in the Arab/Islamic world, is of little value to those seeking genuine understanding of the subject matter.