CAMERA has prompted correction of a Jewish Telegraphic Agency article which incorrectly reported that convicted terrorist Bassam Al-Sayeh died in an Israeli prison. In fact, Al-Sayeh, who suffered from cancer, died in an Israeli hospital. 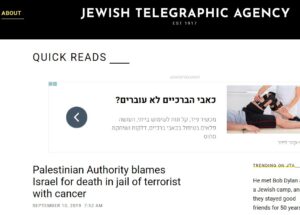 The Sept. 10 headline had originally erred: “Palestinian Authority blames Israel for death in jail of terrorist with cancer.” But as JTA’s Marcy Oster reported in the accompanying article, Al-Sayeh, convicted for his role in the October 2015 murder of Rabbi Eitam and Naama Henkin, “died Sunday in an Israeli hospital.” According to the Palestinian Authority Prisoner Affairs Commission, he died in the Assaf Harofeh Medical Center.

In response to communication from CAMERA, JTA has commendably corrected, amending the headline to accurately state: “Palestinian Authority blames Israel for death of terrorist with cancer serving jail sentence.” Contrary to common journalistic practice, editors did not append a note to the digital article alerting readers of the correction. JTA has notified its clients of the corrected headline, and CAMERA is in communication with The Jewish Journal of Los Angeles and the Cleveland Jewish News, whose sites still carry the original inaccurate JTA headline.

In response to communication from CAMERA, both the Jewish Journal of Los Angeles and the Cleveland Jewish News have corrected their headlines, replacing the original headline with JTA's accurate amended headline: "Palestinian Authority blames Israel for death of terrorist with cancer serving jail sentence."