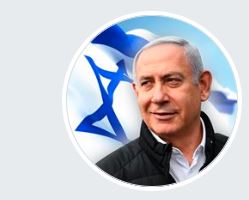 The sentence contains two errors. First, the account wasn’t suspended. The chatbot (automatic messaging) function was. Second, it wasn’t a post that said “Arabs want to annihilate all of us,” but a chatbot. As Haaretz detailed (“Facebook Sanctions Netanyahu After His Chatbot Warns, ‘Arabs Want to Annihilate Us’“):

The move comes after chatbot messages were sent from Netanyahu’s page stating that “Arabs want to annihilate us all.” …

The message appeared in an automatic popup to users who accessed Netanyahu’s Facebook page on Wednesday. It urged them to convince undecided voters to cast their ballot for Likud in next week’s election since “We cannot have … a secular left-wing weak government that relies on Arabs who want to annihilate us all – women, children and men.”

After Haaretz reported on the message, Likud said that it had been the result of a staffer’s mistake and that the prime minister had not seen or authorized it. The message was subsequently removed.

Though AP did not correct that particular article, a subsequent article that day which mentioned the Facebook censure more accurately reported: “An automated post on his Facebook page claimed Arabs ‘want to annihilate us all'” (“Israeli vote leaves Netanyahu’s political future in doubt,” 7:32 pm GMT). The more recent article does not carry the incorrect claim that Facebook suspended Netanyahu’s account for 24 hours, though it still inaccurately refers to the automated message as a “post.”
Separately, a New York Times Op-Ed by Raja Shehadeh (“Israel Wants Palestine’s Land But Not Its People“) erred:

CAMERA has contacted The Times to request correction of the inaccurate assertion that Netanyahu “said” this to his voters on a Facebook post. In fact, an automated chatbot set up by a staffer made the statement. Netanyahu denied having seen or authorized it. Facebook suspended one feature of Netanyahu’s account, not “some features.” Stay tuned for an update.